Down with politics! : And One – Bodypop

If you were to combine Leonard Cohen, Laibach and Aqua with just a sprinkling (dare i suggest it) of The Village People, the result would go some way to resembling And One. To describe them as ‘peculiar’ is not really to say anything meaningful about Europop, which has never borne much resemblance to the pop music from Britain and America. In recent years, this fact is proving to be No Bad Thing; through the late 90s and 00s, ‘English pop’ (to include both sides of the Atlantic) has collapsed into a generic, uninspired agglomeration of meaningless plastic, vacuous/misogynistic randb, and the woeful efforts of pseudo-rock bands, who arguably try hardest to be interesting, but for the most part – due to a ‘retro’ mindset – succeed only in producing pastiche replicas of something older, better and far more genuine. Against such a pitiful backdrop, the often tawdry excesses of Europop (and its Asian cousin, J-Pop) have come to be a powerful blessing, albeit a mixed one; individuality and originality, at one end of the continuum, become a questionable understanding of “quality control” and a habit of taking oneself too seriously at the other. And One’s particular brand of EBM has fallen into this trap regularly, and yet when they avoid it it’s with such panache and conviction that it renders their flaws entirely forgiveable. 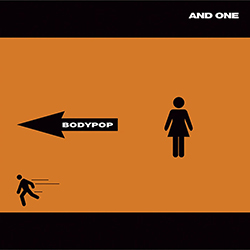 They have a substantial corpus of albums and singles, all of which meander freely within the no man’s land betwixt egregious and enthralling. However, their most recent album, Bodypop, suggests that, finally, they are grasping what aspects of their musical personality should be pursued, and which can be ejected. Political issues have always mattered to And One, and this has been reflected in much of their work; however, Europop – like all the popular genres – is a weak instrument for political discourse; it may, and does, stir up feelings, but only in the most superficial and transient way; in any case, the majority of listeners to this kind of music, i would imagine, do not come to it with political opinion among their principal concerns. The title Bodypop immediately suggests a different emphasis, and indeed this is their least overtly political album, allowing their highly danceable tunes to move in a less fettered way (although with an occasional tendency to march). Furthermore, a striking lyricism is prominent here; lengthy, moving melodies that demonstrate just how superb Steve Naghavi’s baritone voice really is. And One wouldn’t be And One if palpable campery and kitschness were absent, and a couple of songs – ‘So Klingt Liebe’ and ‘Body Company’ – will happily furnish the gay clubs of Europe with floor-fillers. They’re not so outré that they become silly, though; despite my allusion to The Village People earlier, Pet Shop Boys is probably a better comparison. And also Depeche Mode; in addition to the similarity of Naghavi’s voice to that of Dave Gahan (at times, the resemblance is uncanny), the backing electronics are redolent of them too, superbly created with imagination and, above all, restraint, supporting the vocals rather than squelching all over them. Despite their Germanic heritage, And One’s sound is surprisingly cosmopolitan; the chorus of ‘The Sound of Believer’ has a Mediterranean (Greek?) flavour, and they explore a wide variety of tempi, from rapid dance tracks to more relaxed numbers. There’s a couple of worthy instrumentals too, at each end of the album, suitably titled ‘Mein Anfang’ and ‘Dein Ende’; they live up to their names, the former being a concise introduction and hint of things to come, the latter an extended coda with – despite its omnipresent sense of denouement – broad scope and interesting textures.

In my opinion, this is their first album to show consistent high quality; among them, a couple of tracks are really outstanding. ‘Military Fashion Show’ may be too full-on Europop for some, but it’s a first-rate song nonetheless. ‘Enjoy The Unknown’ is the best song on the album, and one of the finest pop songs i’ve ever heard; the chorus is almost non-existent but wonderfully rousing, demonstrating the power of its melodic content; Steve Naghavi has never sounded better. ‘Stand the Pain’ is bouncy, brilliant and insanely catchy, while strangely affecting is the final song, ‘The Dream’, a soft digital lament, laden with honesty, lacking in schmaltz; it shows a sensitivity (and at its conclusion, a delicacy) almost unheard of in this kind of music. A really fine album.