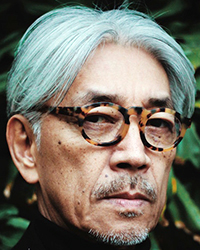 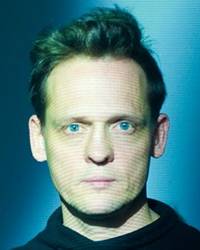 Having spent the last four days absorbed in the monastic pattern of life at Burford Priory, i’ve returned home with, among other things, my senses both heightened and sensitised. i’ve needed somewhat gentle stimuli, and so it seems perfect timing to return to my ambient musings, focusing on the the collaborations between Alva Noto and Ryuichi Sakamoto. While i know little of Sakamoto’s work beyond these releases, i’m something of a fan of Carsten Nicolai’s work in the guise of Alva Noto; expect a post about his music as and when. Apparently, the nature of the collaboration was rather like that of The Postal Service, the two composers working independently, sending material back and forth, each modifying it further, until both felt that the music was ready. In a way, the polarisation is extreme; Sakamoto confines himself to the piano, around and through which Noto weaves his electronic blips, glitches and patterns. “Weaves” seems entirely the right word; there’s a palpable sense that this music is like an expertly-woven fabric, and this in itself is revealing; so many times have i heard the argument that electronic sounds cannot be integrated properly with acoustic instruments, an argument that seems disproved by the resultant textures of this collaboration. Admittedly, the material is simple and restrained, often to the point of appearing austere (no surprise that i’m drawn back to this music after spending time in a monastery!), and this may account for the success of the blending. 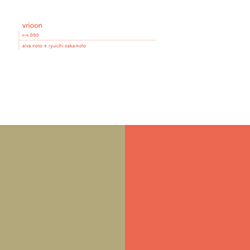 To the music, then, but first, a disclaimer. Despite the combination of sources, this is absolutely not ‘ambient electronica’—along with ambient, one of the most hackneyed genres in existence, and certainly one in whose name a great quantity of drivel has been made. Alva Noto and Ryuichi Sakamoto have done no such thing; this is in every sense a music created within what i have been calling the “ambient tradition”—indeed, its sheer gentleness and rigorous simplicity make it some of the most ‘pure’ ambient music since Music For Airports. From the outset, their first release, Vrioon, comes across like a manifesto, “Uoon I” (the longest track) laying out the raw materials of melodic fragments and chords, occasionally manipulated by the electronics, sometimes embellished with a drone, but always underpinned by their soft momentum; it’s a sublime opener. “Uoon II”, by contrast, concentrates on piano alone, turning its gestures into a collage-like construction; the result floats and drifts while continuously shifting and evolving. “Duoon” is relatively short, but as its omnipresent drone becomes established, quickly turns utterly hypnotic, with the intensity of a laser cutting through metal. “Noon” is the most minimalistic, piano and electronics independently exploring cyclic material; unfortunately, this palls after a while, but thankfully it’s the only track on the album to do so. After a brief but distinct Aphex Twin (SAW II) connotation at the opening of “Trioon I”, it settles into a languorous mode that feels suffused with heat-haze; the music is ‘close’ like the air on a humid day. The gentle bleeps segue into “Trioon II”, an incredibly soft conclusion to the album, very slowly developing the same kind of hypnotic drones heard in “Duoon”, before sleepily dissolving. There’s real skill demonstrated here; this kind of beauty rarely happens by accident. 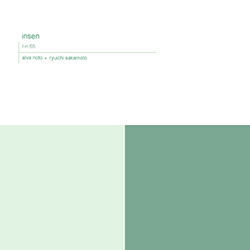 Three years passed before Insen was released, and from the outset a different tone is established. Noto is now more prepared to subject the piano’s meanderings to slightly more manipulation (always with great care), as well as asserting his rhythmic credentials. The opening track, “Aurora” places Sakamoto’s melodic jottings into an exquisitely delicate rhythmic frame; it gives momentum to the music, but never does this sound awkward, the piano never feeling forced along. It’s a wonderful example of ‘concentric tempi’, a feature i love in music, where slow and fast materials are paired, allowing the listener to focus on one while ever aware of the other; the effect is to give the music a rich, deep perspective (a post about other examples of ‘concentric tempi’ could be interesting). Towards the conclusion of “Aurora”, Sakamoto explores the higher regions of the piano, and this is a welcome development; for all its beauty, the instrument rarely ventures outside its middle range throughout Vrioon. “Morning” is beautifully pointillistic, combining deep bass pulses with the piano’s disconnected notes; together with the quietly busy drone, it brings to mind falling water droplets (of all sizes, including some giant ones). “Logic Moon” takes a small melodic idea and obsesses with it, seemingly examining it from all angles; it runs the risk of sounding a touch too repetitive, but heard as a kind of modern mantra, it perhaps takes on a more elevated tenor. Glitches abound in “Moon”, the piano somewhat less prominent, seemingly surrounded on all sides by electricity and movement, fragments of its material forming part of the matrix. This idea continues at the start of “Berlin”, an extremely impressive track that soon settles into a deep bass drone (the first appearance of which is breathtaking); the glitches resurface halfway through, bristling the surface of the music. “Iano” sounds like a lonely sonar, forming the basis for shuffling rhythmic patterns and a heavy bass pedals. The sonar fades into “Avaol”, the final track, where all material is eroded away to mere grains of noise (sounding rather like a field of tall grass on a windy day); it’s a gorgeous deconstruction, half-heard vestiges of the piano’s music circling like yesterday’s echoes. 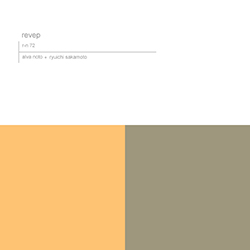 A short addendum to this album came out the same year, in the form of an EP entitled Revep. It’s emphasis is away from beats, focusing more closely on the piano. “Siisx” does away with beats altogether, presenting the piano’s material in stuttering fits and starts, all the while sounding utterly organic and natural, so much so that all sense of ‘glitch’ is pretty much lost altogether; deep drones and pulses give the track solidity and, particularly towards the conclusion, a quiet majesty. At first, “Mur” continues seamlessly from “Siisx”, before wide, bright chords suddenly enter, and new rhythmic patterns ensue, gradually accumulating first motes and then clusters of noise around them. The final track “Ax Mr. L.” has connections to Sakamoto’s soundtrack to the classic “Merry Christmas Mr. Lawrence” (that film’s exploration of cross-cultural communication is interesting in the light of this collaboration); it’s a brooding work, with only the barest of glimpses of the melodic fragments escaping the incessant stammering holding them back. It’s a superb little EP.

In more than one place i’ve seen this music described as “sad” or “melancholic”, but this is not at all what i take from the music. There’s gentleness, delicacy, quietness and—in light of the violence that often permeates Alva Noto’s solo work—a remarkable restraint, but none of this says “sad” to me. i find it a joyous music, perhaps with a wistful sense of longing, but overall imbued with peace.

Been a long time Sakamoto fan and have to say that his collaborations with Noto are among the best he's done.