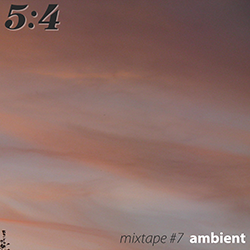 To conclude the little series of posts about the “ambient tradition”, here’s a new mixtape devoted to this special genre. It’s the hardest mix i’ve made so far; the temptation was, perhaps, never to stop, to create a compilation that could play into infinity—which is, after all, the point towards which the best ambient music inexorably tends. Some of the composers i’ve written about are included, but not all; the music of neither Steve Roden nor John Hudak lends itself well to this kind of mix, best heard in their own, very particular, contexts. Therefore, some additional names surface here, about whom i’ve hitherto been silent, but no less excited.

Without wishing to throw too much emphasis on them, i’ve included three tracks by the simply remarkable Bersarin Quartett, who will surely deserve a post some time soon. Despite some post-rock shadings, there’s a distinct ambient flavour to their music, coupled to an interest in lightly classical instrumental music too; that in itself isn’t a new combination, but theirs is a uniquely dark blend, best heard after sundown. “Inversion” is especially hypnotic, its golden section-esque climax rapturous, followed in its wake by a translucent coda. i’m a fan of the Spire project (devoted to contemporary interpretations of organ music), and Fennesz‘ short, cyclic re-working of one of Charles Matthews‘ performances is exquisite; i especially like how the music drifts between stereo and mono—listen through headphones if you can. i mentioned Robert Rich‘s Somnium recently, and can now proclaim that i have heard the work in its entirety, all 7 hours of it. Parts One and Three are the most engaging (for obvious reasons, if you read this), and i’ve extracted a relatively tiny portion of the first part; this is Rich at his best, sugar-free. Also mentioned before was Stephan Mathieu (who collaborated with John Hudak on Pieces of Winter); his solo work is fascinating too, and Radioland is worth tracking down if you can find it (the packaging is lovely). No further words required for Alva Noto and Ryuichi Sakamoto, nor indeed for Lustmord. The Missing Doors, however, will probably be unfamiliar; i admit i was drawn to this album initially due to Ray Caesar’s striking cover artwork (see it here; i really love Caesar’s art, of which you can see more here), and it was a fortunate gamble; the album is strange and experimental, and the 20-minute opening track (about half of which is represented here) is a fairly austere drone piece, redolent of both Roden and Hudak. And finally Implex Grace, about whom—once again—little further needs to be said, except to wonder where he’s gone in the last couple of days, having all but vanished from the internet; i hope everything’s okay with him; until he resurfaces, you can download his entire output free directly from his website here. “Summertime Sleepy Theater II” lasts around an hour, so i’ve taken another excerpt, from towards its conclusion, one of the most electric episodes in a fascinating piece. Despite my urge to keep adding more music into the mix, i set myself an hour maximum, which i hope will make for an interesting journey. Incidentally, the artwork for this mixtape is from a photo of the sky that i took yesterday evening, as the sun was setting behind the Malvern hills.