i’m surprised there’s not more comment on the web about the recent concert given jointly by the Metropolis Ensemble and Deerhoof, which took place in July in Brooklyn as part of the Wordless Music series. This had been hyped up a fair bit beforehand, partly because it was bringing together two groups who have a very modern outlook, but mostly because it featured a new take on The Rite of Spring. WNYC broadcast the entire concert online; surprisingly, no-one seems to have recorded it, so links to my own recording are below. Also, some excellent photos from the concert can be seen at WNYC’s Flickr page. Now, to the music… 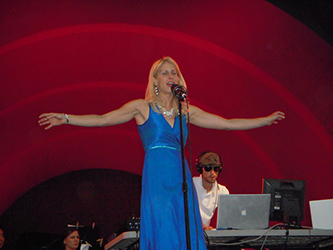 Metropolis Ensemble’s hour-long half of the concert began with Two-Part Belief by composer Ricardo Romaneiro, for soprano and electronics. From a gently flamboyant opening, there’s an interesting initial interplay between the electronics and the powerful melodic line, delivered superbly by soprano Hila Plitmann, who is at times required to soar extremely high. The relationship quickly becomes unclear, however, and at times the electronics seem hell-bent on undermining the soprano line, which surely isn’t the intention. At best, the electronics create an evocative, shifting backdrop for the soloist, although this is often disrupted by its gestural quality. Overall, there’s something rather primitive about the electronics’ contribution in this piece; the composer’s enthusiasm is perfectly evident (and this does, actually, go some way to covering some—not a multitude—of his sins), as is his enjoyment of the sounds he’s creating; what’s lacking is real imagination. The brass make strangely occasional contributions, and it’s a huge shame they weren’t involved throughout, as the texture at these moments is truly exciting and gives a hint of what might have been.

The focus, though, is The Rite: Remixed, a transcription of Stravinsky’s masterpiece also for the combination of brass, percussion and electronics, conceived by composers Ricardo Romaneiro and Ryan Francis and engineer Leo Leite. i admit i was pretty keen to hear this, but unfortunately, it proved to be an immense disappointment. Once again, their ambition is not in question; what is in question is quite what they feel their “remix” contributes to the Rite‘s material. Very much of it—especially the harmonic language and rhythmic impetus— has become unclear in this version, obfuscated by the electronics which, i assume, are attempting not so much to ‘play’ the music as interpret and elaborate around it. Sadly, it reduces Stravinsky’s material to a succession of mere gestures, which are then expressed in a horrible manner suggesting outtakes from an early Walter Carlos experiment; for all their high-tech gadgetry, it’s amazing how basic it all sounds. No, no, no—i’m all in favour of affectionately re-working the past, but this is nothing more than a shabby distortion masquerading as a tribute. If this all sounds rather harsh, even unkind, then it’s simply because anyone who takes on a work of the magnitude of Le Sacre must realise they have got a lot to live up to. Put crudely, the result needs to be pretty damn amazing, and this falls an extremely long way short of that ideal.

The intermission interviews – despite being conducted by David Garland, who throughout the broadcast sounds more like a robot than a human being – are good, especially the contributions from Deerhoof, who are by turns illuminating and very funny. 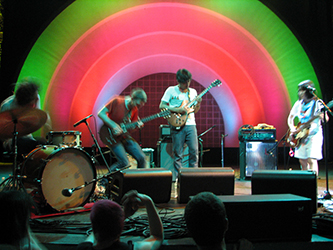 In contrast to the misery of Metropolis, Deerhoof’s 70-minute set was all glory. The set includes songs from almost all their albums, plus a selection of new, unheard songs from their forthcoming album Offend Maggie, released in a month’s time. Each and every song is delivered with exuberance, at times wonderfully chaotic (“Flower”), and demonstrating remarkable skill: the timing in “Rainbow Silhouette at the Milky Rain” is just incredible. For me, the highlight of the set is the 10-minute rendition of “The Last Trumpeter Swan”, epic in its scope, and featuring some astonishing control of feedback. But despite all the mind-bending originality and avant-garde cleverness, they’re clearly having a lot of fun; the playfully long pauses in “Holy Night Fever” are one of many signs of that. It’s a splendid webcast, capturing them wonderfully clearly, including Greg Saunier’s announcement of the sneak preview of their new single “Fresh Born”, handed out as handwritten sheet music at the concert (this sheet can be downloaded here). Satomi Matsuzaki is, as ever, a sheer delight to listen to; in the intermission interview, she says how she doesn’t rate her singing much, but i can’t imagine anyone else sounding right in music like this.

If only Deerhoof had decided to remix the Rite; now that would have been something worth hearing….