Netlabels are a curious phenomenon. On the one hand, they’re rather like havens for creatives to inhabit, artistic agglomerations producing wildly (un)predictable output; on the other, their surprising dedication to giving music away free of charge seems to have abandoned any hope of remuneration for creative endeavour. It’s hard to see them as the future; for now, at least, they’re fascinating and very useful; a gift horse into the mouth of which i have no intention of looking. Some netlabels have made the mistake of becoming stylistically typecast (e.g. one – and a feeble style at that), while others seemingly vanish overnight (the most recent being Nikita Golyshev’s excellent Musica Excentrica, that one can only hope returns soon). The best, however, chart an altogether less predictable path through territory that is often radical and challenging. Crónica is one of my favourites, a netlabel combining physical and digital releases, some of which are free, alongside some curious accompanying paraphernalia (or, if you prefer, art) and interesting podcasts. 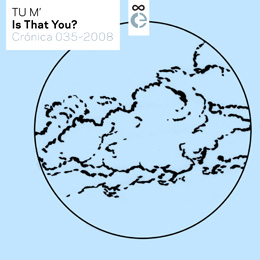 It was Crónica that introduced me to the Italian multimedia duo Tu M’ who, early this year, released a free EP entitled Is That You?, which quickly became—and remains—one of my favourite releases of 2008. It comprises three tracks, one for each word of that title, exploring markedly different sonic environments. The laptop—rapidly becoming (at least, ostensibly) a sine qua non for the budding composer—is the instrument of choice for Tu M’, but this is very far from obvious in the opening track, “Is”. It’s an organic, woody composition, with clarinets and marimba pervading most clearly through the warm fog that drifts stodgily for its 5-minute duration. Tu M’ have struck a critical balance here; the sounds are obviously treated and manipulated, but at no point lose that essential quality that betrays a raw acoustic origin. It’s beautiful and tragic, a dirge-like procession that is as moving as it is striking. The longest track, “That”, occupies a more luminous landscape, spinning and pulsating with heavy radiance. Pulses, yes, but not a pulse, as such; the object at the aural centre floats tantalisingly free from any trace of rhythm, couched in the kind of soft ambient washes that, in lesser hands, become mere mush. It’s an exquisite ambient creation, static and yet always shifting and evolving, hovering around the listener, by turns sitting quietly and looming large. “You?” is something of a counterpart to the opening track, although here dirge has turned to majesty, tears have yielded to a smile, its slow chord progressions sounding like a chorale intoned on deep brass. Although voluminous, the 7 minutes of velvet richness have a lightness that’s difficult to pinpoint, but is clearly evident; maybe it’s the brightness of the cadence that begins each repetition, perhaps the impossibly slow crescendo—whatever, it is a ravishingly, emotionally laden valediction to a really excellent little EP. i cannot recommend this release highly enough.

Is That You? is available free from the Crónica website, in both Apple Lossless and mp3 formats. While you’re there, take a look at Miguel Leal’s beautiful rubber stamps created to accompany this release, most of which are still available to buy (assuming you really do have €125 sitting around). And if you like the album as much as i, do the decent thing and make a donation; music this good deserves nothing less.