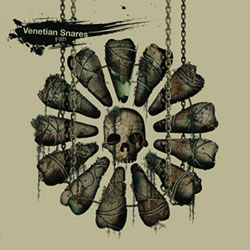 Is it me or is Aaron Funk’s output beginning to slow? Nine months on from last year’s Detrimentalist, Funk is back with a new Venetian Snares album, Filth, released in late April.

Opening track “Deep Dicking” is a paradigm for the whole album, hyperactively squelching around in digital detritus; sounds, flurries, gestures, beats and burps passing by at breakneck speed. Underpinned by a relentless, almost happy-hardcore beat, it has a potent manic quality, suggesting Venetian Snares at its best, breaking apart familiar beat elements, scrutinising them, reassembling them, creating disturbing collages from the fragments. It ends as it began, playing around in the dirt of the album’s title, after which “Crashing The Yogurt Truck” continues in such similar fashion that it could almost be a ‘part 2’. The Speak and Spell is brought out of retirement (last heard 5 years ago on Huge Chrome Cylinder Box Unfolding) and folded into the mix, along with increasingly retro twangs redolent of the TB-303 and TR-606. This is taken further in “Labia”, ploughing a distinct faux-analogue furrow, at times bringing to mind Aphex’s Analord series, before abruptly cutting off. There’s only time for a snatched breath before being plunged back in, with “Mongoloid Alien”, where the cyclic intensity assumes fever pitch, obsessively repeating the title ad nauseam. “Chainsaw Fellatio” (no, i don’t know either) is the first to reduce the frenetic pace, although the slower, swaggering tempo has the effect of making all the surrounding ephemera seem, if anything, faster at times than before.

The second half of the disc attains heights of imagination of the kind Funk hasn’t demonstrated in some time. First comes “Kimberley Clark”, a galloping track that quickly assembles layers above its bass-heavy roots, before dissolving around halfway through, reinventing itself with a chiming melodic motif and new bassline. “Calvin Kleining” troubles the omnipresent 7/4 metre (into which Funk is clearly able to breathe new life), causing it to hiccup and splutter, lurching forward in spasms, only occasionally allowed to build real momentum. No such restrictions in “Kakarookee Hates Me” (a reference to one of Funk’s cats), a no-holds barred tub-thumper, impossible to sit still to; utterly fantastic and riveting, peppered with an absolutely kaleidoscopic array of sound shards. “Splooj Guzzlers” is the track with, it seems to me, the weakest sense of direction or identity, sounding at times rather like a child wilfully smashing things up (perhaps a fitting metaphor for Aaron Funk?); it’s the track most coloured by the TB-303, squelching and squeaking like so much neo-acid. To close, “Pussy Killer” brings most of these facets together, at first in a relatively less intense context, the tempo slowed and deconstructed, beneath soft glimpses of melody. Before long, though, the beats are firmly put back up to speed, attracting more and more pieces of swirling debris around them, forming a dense climax(e), sweatily fading in swathes of reverb.

Few musicians are able to play with material better than Aaron Funk; Filth finds him in irrepressibly playful mood, yet displaying a rigour and consistency absent from previous releases. My faith has been emphatically restored.