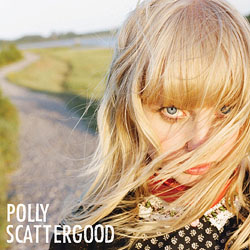 Of late, i’ve been revelling in new releases from a number of British female singers, all of whom deserve much wider appreciation. First up is the superbly-named Polly Scattergood, whose self-titled debut album was released early last month. Scattergood—her real name—is an alumnus of the BRIT School, an inconsistent institution that has churned out numerous successful musicians, from the talented (Imogen Heap) to the banal (Katie Melua/Adele) to the disturbingly talentless (Amy Winehouse). Thankfully, Scattergood is very much at the Imogen Heap end of the spectrum, her songs often very unconventional, her voice capable of both aching fragility and disconcerting caprice.

Despite being a debut, the naïveté suggested by Polly Scattergood’s voice isn’t particularly noticeable throughout the album’s 10 tracks; it’s a confident, assured debut. On the other hand, lack of experience has its own kind of freedom, and this is perhaps best demonstrated on the surprisingly lengthy opener, “I Hate The Way”. Beginning with great delicacy, Scattergood’s voice extremely close-miced, it treads a path that worryingly suggests a ghastly emo track is to ensue: “I hate the way I bleed each time you kiss me”. Yet what follows is nothing of the kind, an increasingly fraught and insistent elegy, one that follows a nicely unconventional structure; at the middle 8, the song opens out into beatless gurgles beneath an angelic countermelody, while the coda abruptly descends into a surly, obsessive and deeply insecure monologue about wanting to gain the beloved’s attention away from “all those other girls”. It’s an impressive, deeply honest track, and also something of a statement of intent: baring the soul in an unconventional manner is to be expected.

While the rest of the album doesn’t quite live up to the imagination of this first song, that’s not to take too anything away from the other songs, particularly not “Other Too Endless”, released as a single prior to the album’s release. It’s a somewhat scrappy song, Scattergood’s voice fighting to be heard among the dense rock texture surrounding her; but it has a warmth and melodic strength that make it highly engaging. “Untitled 27” is about as strong a contrast as possible: taking its time, bass-heavy and moody, very slow indeed. There’s a hint of Kate Bush to Scattergood’s voice here, although it would be unhelpful to make too much of that; her voice has more than sufficient character of its own to resort to hunting for comparisons. An excess of compression afflicts the jaunty “Please Don’t Touch”; the song doesn’t need this kind of phoney mastering to pack a punch and, seeing as this is intended to be her next single, it would be nice to hear this in a slightly less intensive version, as it has the makings of a thoroughly enjoyable song. i’ll skip over “I Am Strong”; the lyrics are an interesting litany of inward appraisal and outward accusation, but musically it’s disappointingly dull.

The opening of “Unforgiving Arms” finds Polly sounding a little like Toni Halliday, although the song is nothing like Curve. i remain ambivalent about it; the verses sound untidy and cluttered, but on the other hand i rather like how unconventional (certainly unmelodic) they are. “Poem Song” is a simplistic, even child-like rendition, her voice paired with electric piano. a few ominous electronic buzzes lurking at the edges. It’s a gorgeous little song, and demonstrates admirably how well she can sing—her singing style is impossible to pin down, so many allusions seem momentarily to appear, but she really does have a voice all her own, with a rawness that is attractive and endearing, perfectly suiting these songs. “Bunny Club” begins in sprechstimme and whispers, out of which a melody emerges, underpinned by heavy bass pulses and embellished with assorted electronic blippery. The song is one long crescendo, in the process accumulating organ chords, nasal synths and heavy beats, becoming a curious amalgam of stately and dance-like. Released in late 2007, “Nitrogen Pink” follows a similar trajectory, rising in tempo and as well as intensity; the accelerando contributes a lot towards making this such a thrilling, unbridled, joyous song. The album ends in simple fashion, just voice and piano, Scattergood sounding especially frail, almost faltering as she expresses the impassioned, imploring lyrics; beautiful.

This is very much an album that requires repeated listenings; in the last few weeks i’ve grown to love it.