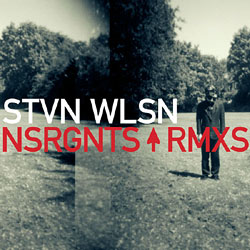 Remixes are an entity about which i have long felt deeply ambivalent; experience has taught one to approach them with extreme caution. In musically imaginative hands, they can of course be spectacular, teasing out new aspects of the original, even redefining it, becoming worthy to stand equally beside it, a wholly new ‘version’. Outstanding examples include Nine Inch Nails’ Further Down The Spiral, that takes the material from The Downward Spiral into yet darker territory, and the plethora of fascinating remixes found on Björk’s CD single releases over the years. More often, though, they demonstrate a lack of either imagination or even competence, doing little more than tarnishing the original, damaging irreparably those elements that made it what it was. This is taken to extremes when the original is particularly excellent; i wrote a few months back about the shameful cluster of remixes inflicted on songs from Freezepop’s brilliant Future Future Future Perfect album, and more recently two superb songs—Lily Allen’s “The Fear” and Röyksopp’s “The Girl and the Robot” have found themselves surrounded by equally trivial, pointless remixes (the “Joakim Remix” of Röyksopp’s track is especially egregious, the vocals slightly out of tune with the backing harmonies). So i was very much in two minds about the CD that fell on my doormat yesterday, Steven Wilson‘s mini album of remixes from his truly outstanding album Insurgentes, titled NSRGNTS↑RMXS.

Although there’s not a duff track on that album, four of the very best have been chosen for this disc: “Harmony Korine”, “Get All That You Deserve”, “Abandoner” and “Salvaging”. Dave Sitek takes on “Harmony Korine”, handling the whole as though with kid gloves, suffusing it with more kinetic beats. It’s a polite treatment, not at all bad (although the tweaked second chord of the chorus is needless and sounds strange), and provides a nice alter-ego for the song, revealing how relatively restrained the percussive elements are in the original. But such success is short-lived; it’s contrasted violently by the “Dälek Mix” of Wilson’s most sublime track, “Get All That You Deserve”. This is nothing more than a bland, static, insipid and entirely uninspired rendering, where only a single phrase from the original (“in this world”) repeats stupidly while absolutely nothing of interest happens around it—Steven Wilson should have been insulted by crap of this magnitude, and why on earth it features here is a total mystery. Engineers are on the same label as Wilson (Kscope), and their remix of “Abandoner” is quite delicate and light, rather like a watercolour. It has the consequence of drastically diminishing the vast chords that permeate the last third of the song but, embedded within organs, bells and a velvet cloak of reverb, it’s a very attractive guise that works with the material rather than against it.

No less a figure than King Crimson’s drummer Pat Mastelotto re-works “Salvaging”, and it is indeed a re-work, placing Wilson’s vocals into an entirely new texture of guitar stabs and string stings, overlaid on a highly effective carpet of drums and percussion. Strings only feature in the middle episode of the original song, a passage that Mastelotto retains in his version, although now they sound rather more understandably present, having been given a voice throughout. It’s absolutely superb, the epitome of what a remix can be, in the process rather showing up some of the other attempts. “Abandoner” returns, this time in Łukasz Langa‘s “Danse Macabre mix”, that won Steven Wilson’s recent competition to remix the song (details here). Knowing that it’s a competition winner adds a certain sense of expectation to the result, which is then somewhat disappointed by Langa’s effort. It’s not without some interest, but overall makes a dull impression and, at times, sounds rather too ‘home-made’ for its own good (or maybe i just mean ‘amateur’, which is fine but i wish it didn’t sound it). To end, “Get All That You Deserve” remixed now by one-time Nadja bed-fellow Fear Falls Burning (a.k.a. vidnaObmana, a.k.a. Dirk Serries). Serries has collaborated with Wilson before—under the collective name Continuum, from which they released two albums exploring melancholic, dark ambient material—and this remix is similarly dark, and progressively more noise-oriented. It embraces the stark dejection of the material, paring it back further, injecting it with greater fragility; like the opening remix, it’s not a radical departure from the original, but it’s potent nonetheless, and makes for a strong final track.

This mini album’s inconsistency echoes my own ambivalence towards remixes; it’s by no means ignominious, but at times borders on being ignoble in its treatment of the original songs. i described Insurgentes as a ‘must-have’ album; sadly, due to its inexcusable quality control issues, this selection of remixes is nothing of the kind. Worth having, but not a patch on the original, which—i’ve said it before and i’ll say it again—is one of the greatest albums of all time.

The CD is available through Kscope (it won’t be in shops until August); a vinyl edition, containing just three tracks, two of which are irritatingly omitted from the CD, is also available. A digital download will be forthcoming soon; sadly, individual tracks won’t be available, so the duff remixes can’t be avoided.