Two months ago, i reported that my ensemble, Interrobang, was to perform Steve Peters‘ remarkable ambient work, The Webster Cycles. It’s a work that’s entranced me since 2008, when it was released on CD, more than 25 years after its original composition date. It gets its name from the fact that the musical material originates in the Webster dictionary; Peters has taken all words that include just the letters A to G (being musical notes), arranged them in alphabetical order, and given them to players as a musical score. The words are grouped into seven columns, according to their first letter, and the result looks like this (click to see full-size):

Essentially, each player begins in their own time, playing each word on a single, long breath, followed by a pause; the same letter appearing concurrently is played in a different register to avoid repetitions. That’s essentially it; except to say that Peters has—clearly due to experience—accompanied the score with a lengthy collections of Qs and As, together with suggested solutions to issues that may arise in performance (it’s interesting how the simplest pieces on paper raise highly complex questions in practice). 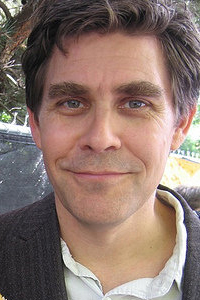 When Peters revived the work in 1998, he specified the work should be played either by a wind quintet or multiple trombones (this latter featuring on the CD); for our performance, with Steve’s permission, we opted for a brass quintet comprising trumpet, flugelhorn, horn, trombone and bass trombone. Over the course of about six weeks, we shaped the piece into its final form; Peters specifies a durational window of 15-40 minutes, and we quickly found it ‘wanted’ to last in the region of half an hour (i suspect this would be the case with whichever ensemble plays the piece; attempting to make adjustments to the overall duration is very difficult due to the aleatoric nature of each player’s performance).

In all, we played the piece twice, first (its UK première) at the ensemble’s evening concert at the Birmingham Conservatoire on 6 May, and again the next day, at the nearby church of St Martin’s in the Bullring. On balance, i found the latter performance the more engaging, in part due to the fact that the players were dispersed around the church building, rather than grouped together as a quintet; the practice of dispersing the players and thereby filling the space more convincingly seems very much more in keeping with Peters’ installation work.

i recorded both performances, and also made a third recording, of the final rehearsal that took place earlier in the week. That recording, being made in a relatively small room with a dead acoustic, i treated with some gentle reverb, resulting in a version not unlike that heard on the CD. All three recordings can now be heard on the ensemble’s Bandcamp page, here. It doesn’t matter how many times one hears the piece, it always seems to reveal something new, and engage the listener in a fresh collection of sound shapes that are mesmerising and very beautiful.

The CD is still available, very cheaply, from Amazon, and a lot more of Steve’s music can be downloaded free of charge from his Bandcamp page. For more information and to hear yet more snippets of music, visit his blog. and last, i’d like to recommend once again his amazing work Here•ings, reviewed on 5:4 here, and essential listening for anyone interested in field recordings.