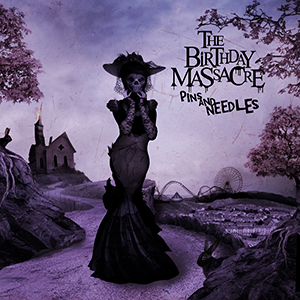 While the majority of contemporary rock—regardless of what prefix it’s given—tends to pass me by as so much generic, posturing fluff, inject a healthy, industrial-strength jolt of electronics through it, and i’m very much more inclined to sit up and pay attention. Such music’s just as capable of factory-line posing as its more raw, guitar-driven cousin, of course, but it does give the music, at least, a veneer of novelty, while at best, produces some of the most exciting rock around. For some years, Evanescence provided my fix in this area, but their focus was lost long, long ago, and their place in my affections has been supplanted by Canada’s most splendidly purple goth-synth-rock group, The Birthday Massacre. Whereas Evanescence hit the ground running, producing outstanding work from their first single onwards, The Birthday Massacre have taken numerous releases over no less than a decade to reach a place of maturity, the latest and most outstanding example of which is their new album, released a few days ago, Pins and Needles.

Opening track “In The Dark” shows the group are prepared to take their time, the song fixed in a relaxed 6/8 metre, vocalist Chibi’s melody swaying over the bass-heavy grungey riffs that keep the song heavily rooted to the ground. It’s an interesting dichotomy; if anything, the melodic line smacks of ballad (albeit one with determination and weight), while the underlay seems more concerned with keeping things moving along; all is united in the chorus, however, when the gentleness of the tune is revealed to be uncertainty and fear: ‘I’m in the dark/I’m alone around you/I’ve never been here before/Nobody here to get me through’. A momentarily soft introduction in “Always” gives way in no time to towering synth chords and a driving pulse, from which emerges another song torn between delicacy and fortitude. The textures here are superb, guitar and bass stabs hovering at the fringes, punctuating the start of each phrases rather than getting too involved; the drums, too, keep a lid on things, resulting in Chibi sounding at times almost perilously unsupported. But again, it’s in the chorus that all the elements find their perfect blend; admittedly, it sounds somewhat busy (there are more elements in there than first appearances suggest), but the vocals—especially in the chorus proper, which follows later—prove to be a vital point of orientation, soaring over everything else, passionately emotive, anthemic in scope. “Pale” draws heavily on the style of ’80s power-rock, heard most clearly in the slow tempo and repeating synth melody; although, relative to the rest of the album, it’s actually a more restrained number, clout is never lacking.

The album accelerates up to full throttle with “Control”, one of the album’s most outstanding songs; on the one hand, it’s entirely conventional, but each and every moment is thrilling and brilliantly executed. One extremely effective aspect is the contrast in the verses between the constant, rapid pulse (heavily punched out on the kick drum) with a main melody that’s content to rise and fall slowly. and in fact, it’s melody that comes across most forcefully throughout this song, made especially memorable by the opening rising minor third being reiterated in the chorus and pretty much everywhere else too; Chibi is at her best in material like this, dominant and heart-felt. The middle 8’s switch to the major key is a nice surprise, bringing a valuable few moments of softer reflection. The razor-sharp guitar edges retreat in “Shallow Grave”, where synthpop is order of the day. The chorus restores the basic rock trappings (power chords flying everywhere), but overall this is a delightful, even cheerful track, despite the seriousness of the lyrics. As the album continues with “Sideways” it becomes apparent that The Birthday Massacre are going to keep up this intensity on every track; the effect is a bit like experiencing a live concert, with barely a moment’s hesitation between tracks, the only respite in proceedings being the brief introductions to each song, which are usually rare moments of quietness.

Whereas “Sideways” is lyrically and musically concise, dynamically reserved, “Midnight” returns to the full-on speed and ferocity of “Control”; it’s made ambiguous by the chorus, though, which frequently halves the tempo; once again, the melodic line prefers the slower option, sitting equally well at both speeds. While “Midnight” is a splendid song in its own right, it also feels a little like a lengthy overture before the title track. “Pins and Needles” is another album highpoint, the scope in every sense suddenly widened; the verses are lengthy, Chibi allowing her melody to meander, mulling over the words, pondering their meaning. The epic choruses, awash with emotion, are also the song’s slowest moments, each time contrasted nicely with a hectic little guitar riff, keen on tritones. This riff is immediately picked up and developed in the opening of “Two Hearts”, a track echoing the lyric brevity of “Sideways”. It’s a lovely example of Chibi’s more whispering tone of voice, almost at odds with the guitars that are seemingly determined to rough up all of the song’s soft edges. The instrumental is noteworthy, featuring a number of motifs highly similar to turns of phrase heard in earlier songs. The final summit in an album of massive peaks is “Sleep Walking”; another track conventional in so many ways, its unstoppable momentum and arching chorus are irresistable, the blend of elements throughout again judged to perfection. It’s tempting to imagine a thousand lighters waving along with “Secret”, every bar of which screams out “final track”; there’s nothing sentimental about the song, though, a pulsing bassline forming the bedrock above which Chibi floats one last time, at a satisfactorily low altitude (reminiscent of t.A.T.u.’s Lena Katina), her voice beautifully rich and full.

‘I could never speak in a way you wanted to hear. I couldn’t convey.” declares Chibi, words no doubt true to the subject matter of “Secret”, but entirely false in respect of this new album. On 2007’s Walking With Strangers and the following year’s Looking Glass EP, the group showed they were growing in stature, the songs attaining ever greater heights of expression. With Pins and Needles, The Birthday Massacre have truly ascended, all of the songs flawless, stratospheric pinnacles, demonstrating absolute mastery of their craft.