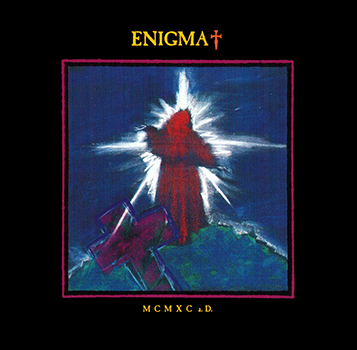 It’s one of those curious memories that remains surprisingly vividly—the time: mid-December 1990; the place: Our Price Records on Cheltenham High Street. Having made my way down the narrow stairs to the basement where the CDs were kept (cassettes only upstairs), i stumbled into a collection of sounds the like of which i’d never heard before. Firmly in the foreground, a fake but plausible shakuhachi, ululating its melody above warm, low ambient soft pads; beneath all of that, a strong but subtle dance beat; in and around it—utterly incongruous yet sounding entirely right—a chorus of monks ensconced in their standard issue Gregorian chant. Still trying to get my head around this most unlikely music, i immediately bought the CD single i was hearing: Enigma‘s Sadeness (Part 1). Hot on its heels, released 20 years ago yesterday, came their first album MCMXC a.D., even more ambitious in the breadth and scope of its imagination. Released as it was on the very cusp of a new decade, i don’t think it’s going too far to suggest that MCMXC a.D. was a potent force in shaping the sound of the ’90s. Indeed, it may well have contributed to the worldwide renaissance of Gregorian chant, that blossomed within a few years (spearheaded by the famous monks of Santo Domingo de Silos), and even sooner than that, acts such as The Orb and Future Sound of London were forging their respective ways forward, clearly indebted to Enigma’s imaginative cocktail of sound sources.

The album’s slow, evocative introduction is also surprisingly outré; “The Voice of Enigma”, both in its title and content, boldly breaks the aural fourth wall in a statement of intent that even goes so far as to suggest how the listener might engage with the music:

Good evening, this is the voice of Enigma.
In the next hour, we will take you with us into another world; into the world of music, spirit, and meditation.
Turn off the light, take a deep breath, and relax. Start to move slowly, very slowly; let the rhythm be your guiding light.

Sensibly, the album gets the ball rolling with the well-known track already mentioned, “Sadeness”, unaltered but now rendered the first in a three-part supertrack called “The Principles of Lust”. Those titles allude to the notorious Marquis de Sade, and one of the main themes of MCMXC a.D. is the conflict between de Sade’s unchecked hedonism (heard most demonstrably in the clearly-aroused breathing) and the restraint brought about from Christian faith (the monks). It may not be stretching a point to hear a similar dichotomy in the ametric ambient washes and the insistent, heavy beats (borrowed from Soul II Soul). The second part of the triptych, “Find Love”, is more restrained and spacious, at first lazily unveiling assorted ideas, before the beats return, shuffling and more muffled than before, punctuated with brass staccati. The allusions to de Sade continue: “The principles of lust are easy to understand […] do what you feel […] do what you want, do it until you find love”, reinforced by even more demonstrably erotic breathing sounds. “The Principles of Lust” concludes with a reprise of “Sadeness”, in which a middle-distance piano initially replaces the shakuhachi with a new melody (redolent of Double’s “The Captain of her Heart”); eventually, the flute returns, and the rest is as before.

Now the mood changes, entering a more dream-like state in which exotic bird calls can be heard all around; and even when a tempo does finally establish itself, while it’s as fast as as before, it has a lightness making it feel slower. “Callas Went Away” is like a song without a verse, the piano returning with a tune not dissimilar from the one in the previous track; the arrival of the chorus therefore comes as something of a surprise (and, in another surprise, my memory of the chorus being sung was proved false; it’s actually spoken/whispered, the melody articulated by plucked strings). The singer of the title, Maria Callas, is heard in a pair of samples, and alongside the Gregorian chant are another example of the sensitivity and skill with which Michael Cretu (the mastermind behind Enigma) incorporates sampled singing into the textures; far from merely adorning or embellishing the music, its harmonies and even its structures are shaped by them.

“Mea Culpa” is an obvious sibling of “Sadeness”, with similar beat patterns, and a return for both the monks and the shakuhachi (it was also the album’s second single release). It’s a more heavyweight track, though, the melodies more gestural, even peripheral, except for a prominent electric guitar solo at its centre. Lyrically and structurally, it’s the turning point of the album, the expression of desire now blanched with pangs of guilt, both in the title (meaning “my fault”) and the deeply conflicted lyrics: “I don’t sleep anymore / I want you / Take me, I’m yours / I want to go at the end of my phantasms / I know it’s forbidden / I’m mad, I let myself surrender / I have nothing left anymore / I want all / When you want, like you want”. The first really different track is “The Voice and the Snake”; short and abstract, its spoken litany (inspired, apparently, by a track by Aphrodite’s Child) evokes the language and imagery of the Book of Revelation, recited over anxious, glowering shards of sound. It’s only a brief excursion, however, and “Knocking on Forbidden Doors” returns to familiar territory, that title heard in the pounding motif that reintroduces the dance beats. Back, too, are the shakuhachi, guitar riffs, and more well-judged plainsong, making it another track in the “Sadeness”/”Mea Culpa” mould, although with a less clearly-defined identity this time.

It concludes with more pounding, segueing into the album’s second triptych, given the title “Back to the Rivers of Belief”, emphatically now leaving behind raw sensuality and turning to sensuousness, becoming reflective. The first part, “Way to Eternity” is built upon sparse African drum strikes, rich with reverb, coloured by a rather whimsically playful rendition of the alien greeting motif from Close Encounters of the Third Kind. The portions of chant, more expansive on this occasion, are once again superbly chosen, perfectly at one with everything else, which drifts sleepily through its 2-minute duration. The pace is picked up in the central panel, “Hallelujah”, resurrecting the drum beats from “Sadeness”, laying them over the African punctuations, which slowly fade. There are snippets of ideas low down, above a buzzing bass drone, as well as phrases lifted from the opening track, which feel strangely inorganic here, but there’s no clear focus or central idea. Ultimately, it’s more of an atmospheric transition track than anything else, leading to the third part, “The Rivers of Belief”. This serves as a kind of chorus for the triptych as a whole, composer Michael Cretu finally taking centre stage himself to sing the tune; everything halts for a quotation about the 7th Seal (Revelation again; this time, sampled directly from Aphrodite’s Child’s album 666), before the shakuhachi returns one final time, elaborating on and around the main melody. It ends as it began, twinkling electronics and a strange, horn-like sound fading into the ether.

As with so many projects that blaze a trail with their first release, Michael Cretu’s Enigma project quickly went off the rails with subsequent albums. Yet, while he never quite recaptured its glory, MCMXC a.D. remains a towering landmark in the landscape of late 20th century electronic music.

memories are never ugly… one can adore Xenakis or Arvo Part together with Gorilla Biscuits or Black Flag… after all who likes only blondes?

Well, if i was to agree with you (which i don't) about this album being "ugly", i'd direct you to the motto of this blog, which underlines the fact such music is often celebrated on 5:4 • But it's clearly not an "ugly" album (& that may, of course, be a reason why you don't like it); "awful" & "shit" are up to you; "reactionary", on the other hand, you're definitely going to have to explain • i don't know about you, but i was there in 1990 when this came out, & i know full well how new & unusual this kind of thing was back then • Far from being a 'reaction' to anything, it established a really new kind of sound, giving more prominence to ambient music & shifting electronic pop/dance (which had to a large extent been languishing in the doldrums through the late 1980s, at least here in the UK) in a fresh new direction •

It's true that it spawned a plethora of mediocre imitators (show me a good idea that hasn't), & also led to the stultifyingly brain-dead 'chill-out' genre that still plagues aspects of contemporary ambient music today • It's even true to say that Enigma themselves ended up becoming part of that dumbed down breed of music—as i said in the article, pretty much everything Enigma did after this was NOT good—but none of that can change the fact this is a contextually significant album, & (in my view) an imaginative, undeniable success •

Is this all a joke? — I don't understand how one can appreciate Schnittke and this load of ugly, awful, sadly reactionary sh*t. Forgive me, I really do appreciate your blog a lot, and thank you for the beauties you've posted; but I have had to bear this one on the radio back then in every supermarket around, and feel a bit surprised to see it back in such a place…