And so it finally begins, the lengthy annual retrospective of all that was best in 2010. As usual, let’s start with my run-down of the 10 Best EPs of the year:

10 | Danny Baranowsky – Steambirds (iOS) Soundtrack
Something of an oddity in this list, perhaps, but Danny Baranowsky’s synthetic score for the splendid iPhone game Steambirds is incredibly effective. He’s managed to capture perfectly the atmosphere and mannerisms suitable for the game’s airborne antics, bringing to mind the soundtracks of any number of British WWII films. The four-minute “Main Theme”, in particular, is full of variety, never composing by numbers, while the additional “Boss Track” takes the invention even further, supplemented by two splendid miniatures, corresponding to success or failure in the game. It’s available free (or not, if you’re feeling generous) via the dB Soundworks Bandcamp page. While you’re there, check out Baranowsky’s music for Canabalt, also stirring stuff.

9 | David Lynch – Good Day Today/I Know
Okay, hands up anyone who predicted David Lynch would bring out a single this year? Keep your hand up if you also knew it would be a delicate electronic dance number. No-one? Defying expectations with his typical enthusiasm and flair, Lynch’s twin A-side took everyone by surprise, maybe even Lynch himself. Über-processed vocals, autotuned to the nth degree, laid over a brisk, unimposing disco beat, it could all have been horribly cheesy. But Lynch somehow pulls off experiments like this, not only sounding like no-one else, but actually making it kind of cool. The more laid-back “I Know” is even better, more obviously Lynchian, ominous and rather unnerving.

8 | Steven Wilson – Cover Version VI
Wilson brought his unique series of cover versions (spanning seven years) to a close with this sixth installment, choosing Donovan’s “Lord of the Reedy River”. It’s given a beautifully hazy, blissed-out treatment, somewhere between the sound of Porcupine Tree and Wilson’s solo Insurgentes project. It’s coupled with a new song of Wilson’s, “An End to End”; deliciously tuneful, Wilson stretches out the slow, simple melody (showing off the very real beauty of his singing voice) before wrapping it in opulently rich harmonies.

7 | Ekca Liena – Orb Night
It seems with each passing month, ambient music (so-called) atrophies further, becomes more of a parody of itself, misappropriated by the talentless and listened to by the undiscerning. Yet, from time to time, a voice with something different to say in this most maligned of genres appears, and Ekca Liena (aka Dan Mackenzie) has just such a voice. Available as a digital download (free, or otherwise) from Blindsight Records, Orb Night is pretty much the only ambient EP i’ve heard in 2010 to demonstrate real maturity. Opening track “Strange Dusk” begins pleasantly enough, but undergoes such a large-scale disintegration later that one’s left dazed in its wake; Mackenzie is satisfyingly unafraid where noise is concerned. But it’s not all as full-on as that; the 10-minute closer “Wing Footed” plays with a simple foreground motif, under which the ground is forever moving, concluding with the richness of a myriad organ stops.

6 | Christopher McFall – A Long Time Running from the Suicide Strays
A major factor in the decline of ambient music is the junk peddled by many netlabels. Resting Bell, on the other hand, keeps one’s dying faith in the enterprise alive, their output (all free) at the more engaging end of the spectrum. They’re in perfect company with Christopher McFall, who never fails to impress, and on this 25-minute release he’s at the top of his game. His ability to blend different flavours of field recordings together is astonishing, and apparently effortless, the results always sounding utterly organic; there’s really no-one working in this area whom i admire more at the moment. As usual, the tracks are themselves subdivided into shorter sections, all of which are among McFall’s darkest material to date (strongly reminiscent of 2008’s The City of Almost); McFall’s source sounds remain just out of reach, making for a disorienting, overwhelming experience. Available free here, but sadly—and stupidly—there’s no lossless option; McFall’s music really requires nothing less.

5 | Hecq – Sura
After 2009’s Steeltongued, Ben Lukas Boysen declared he was bidding farewell to beats. His memory’s clearly playing tricks on him, though, if this energetic, Dubstep-infused EP is anything to go by. Reviewed back in June, Sura explores the more fantastical reaches of beat-play, bass-heavy and imposing, opting to bludgeon the ears more casually than in his earlier work. While the title track interpolates the beats with ambient meditations, as only Hecq can (at least, this well), central track “Tiamat” jettisons anything remotely gentle, lumbering over its shifting percussion like a labour of love. Matta’s remix of the title track is no mere add-on, but a powerful reworking that exposes even more starkly its Dubstep roots.

4 | Kyle Bobby Dunn – Rural Route No. 2
At his best, Dunn’s sonic constructions have a surface like polished marble: impossible to grip on to, riddled with grain and texture. This 20-minute edifice captures precisely that quality, and more besides. Its opening minutes beguile but also deceive; soft, gently building washes of sound gradually turn increasingly firm and unyielding, achieving solidity. One becomes increasingly aware that noise is at the heart of this music, ultimately fixating on a series of sheer, pulsing slabs of sound. The more lengthy second part (titled after an obscure term for the final period of life) takes a different approach, somewhat blunted but more mobile, presenting an unceasing parade of questioning surges, noise lurking at its fringes, like a half-remembered memory of the seashore.

3 | Cosey Fanni Tutti and Philippe Petit – Mist While Sleeping/Invisible Whispers
At a little over eight minutes, this has the shortest duration of any of the releases in this list—yet its impact and aftertaste are among the most breathtaking of anything i’ve heard this year. Entrenched in dirty layers of surface noise akin to the concentric rings of Dante’s Inferno, Cosey’s voice emerges like a siren from the end of the world, the one remaining soft-edged thing in a sharp and jagged landscape. It’s a relentless, harrowing and ultimately exhausting listen; the vestiges of former things heard at the periphery betray little of their former glory. In the midst of such desolation—particularly through “Invisible Whispers”—Cosey’s fragile soprano seems to fluctuate between singing and keening.

2 | Demdike Stare – Forest of Evil
There can be little doubt that 2010 has been Demdike Stare’s year, in which no less than a trilogy of releases have seen light of day. At 24 minutes, Forest of Evil may be the shortest of these, but if anything, seems to ramp up and focus the intensity. Surprisingly, the evolutionary beats early on in “Dusk” can be heard to make allusions to Autechre, later coalescing into something more regular; underpinned for much of its duration by drone elements, it makes for a hypnotic quarter of an hour. That’s when it’s not breaking off completely, fragmenting into shards of noise and field recordings, which form the very fabric of “Dawn”, ultimately turned into a quasi-tribal, ritualistic evocation. The lengthy, mildly hauntological, conclusion seems at first to take the sting out of proceedings, but as it falls into distant, anonymous clangs and surface noise, one’s left feeling distinctly unsettled. 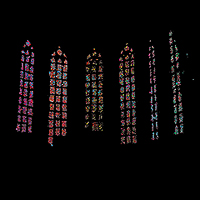 1 | Kayo Dot – Stained Glass
For seven years, Toby Driver’s Kayo Dot project has explored the outer reaches not only of sound, but of the entire process of composition. The results, at times, have an unavoidable tendency to sprawl, although the strength of such releases as Choirs of the Eye and Dowsing Anemone With Copper Tongue (in my view, their best album to date) is a searing testament to Driver’s methods and ideas. Stained Glass is their first small-scale release, and finds these ideas concentrated to the point of intoxication. It opens, somewhat ritualistically, with the semblance of a song, one that sets out with seemingly antitheistic aims and outlook (evoking—and, indeed, quoting—at first, words from Isaiah 14:13):

But Stained Glass is more, so much more, than just a song, and for the remaining two-thirds the group are occupied in a kind of sonic alchemy, creating an instrumental outworking as irresistable as a tractor beam. Support on this occasion is enlisted from Russell Greenberg on vibraphone and guitarist Trey Spruance, in whose group Secret Chiefs 3 Driver himself has taken part. Greenberg’s contributions, in particular, give the music a flavour unlike Kayo Dot’s previous output, coating it in supersize pieces of glitter, harking too at the world of avant-jazz. Once Spruance gets going properly, about three-quarters in, he distorts himself so drastically in the pursuit of his soaring melody that almost any semblance of guitar is lost.

Let’s put it plainly: Stained Glass is a masterpiece, a mind-blowing demonstration of raw compositional muscle, in which the group’s disparate forces improvise and intermingle to perfection, impossibly focused on Driver’s all-seeing creative vision. That such radical music should also be so beautiful—and, thereby, so accessible—is simply amazing. Essential listening for anyone and everyone.