A complete counterpoint to untold destruction: Ex Confusion – Too Late, They Are Gone 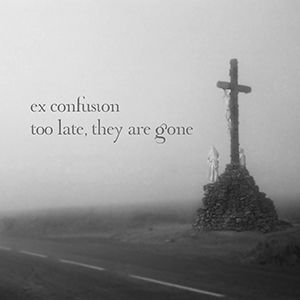 Sometimes, timing changes everything. Tomorrow sees the release of a new EP from Japan’s Atsuhito Omori, better known as Ex Confusion, titled Too Late, They Are Gone. That a work of such sublime quietude from a Japanese artist should come at such a desperate time for that country—which has, in the space of a few days, become synonymous with violent destruction, brought to the brink of despair—lends the music an emotional weight that is, admittedly, extra-musical, but no less real for that. This is to take nothing away from Omori; the timing is entirely coincidental, and i was marvelling at its beauty for several days before the earth shook. But music has an uncanny ability to escape from the clutches of its creator, becoming more and other things to its listeners than they could ever have imagined.

At a little under 18 minutes, and despite its ambient ethereality, Omori’s material is kept focused, particularly through the three tracks at the EP’s epicentre. The opener, “Asking You Why” is contrastingly diaphanous, simple, drawn-out notes reverberating like distant brass through a dense fog. “I See You Breathe” continues in a similar vein, although higher, with a more mobile tonal centre, rocking back and forth beneath soft dissonances that are gently mesmerising. The title track swiftly follows, bringing an abrupt change of texture, more static, resonating outwards from a fixed central cluster. Despite the lack of anything approximating bass, it’s a rich, even slightly heady soundworld; occasional notes protrude sharply out, but their shimmer prevents them from jarring on the ear, adding to the entrancingly hypnotic tone that pervades this track. Moving out past the centre, “It Doesn’t Last Forever” inhabits an almost identical space, but takes a turn for the soporific, the material itself even sounding (in the best sense) tired, each successive cycle of the rotating chords giving the impression that it could well be the last. The title track is the EP’s most radiant moment, but this is its most moving one, the only time that a hint of melancholy becomes barely tangible. “Last Whisper”, the EP’s closing track, retreats to the more plain wistfulness of the opening; it feels less a conclusion than a return-to-reality, after an intense and very beautiful quarter of an hour spent somewhere else.

It would be crass to suggest that Omori’s EP could serve as a requiem for those who have died and those who continue to suffer in Japan. But Too Late, They Are Gone, is unquestionably a complete counterpoint to that untold devastation; as such, it could be heard as a delicate cry of hope, a place within which to pause and remember and perhaps pray, or even simply a relief from it all. It will be what it needs to be for each listener, i guess, but whatever that is, the bold simplicity of Atsuhito Omori’s music has the ability to tap into powerful emotions.

Too Late, They Are Gone is released tomorrow on Heat Death Records. To stream the EP in full, visit Heat Death’s Bandcamp page.

[…] Omori’s music is most at home. and it’s the miniature size of these tracks (reviewed back in March) that makes them as powerful as they are; while lesser minds endlessly play with loops dully […]