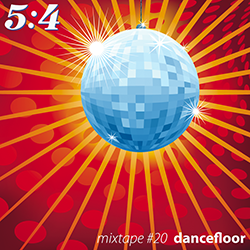 Having finally emerged from the dark days of Lent, i thought it would be fitting to have a new mixtape, with an upbeat theme. As i’ve mentioned on previous occasions, dance music has always been a parallel love of mine alongside the avant-garde, and this mixtape will, i hope, prove to be an irresistable selection. As always, there’s a mix of old and new, the oldest being around 13 years old, the newest released last month.

Delphic were included in the BBC Sound of 2010, not exactly a good sign to be sure, and while they’ve failed (as yet) to distinguish themselves, this song isn’t at all bad, and this remix makes it perfect. Above and Beyond are, in my view, the champions of contemporary trance music, and they feature on this mixtape four times; “Stealing Time” is one of the standout tracks from their lovely album Tri-State, released 5 years ago. Connected to Above and Beyond via their Anjunadeep label is Michael Cassette; this is his latest single, a delicious throwback to 1980s synths. Ahead of Delphic in that dreaded BBC 2010 list was Marina Diamandis, better known as Marina and the Diamonds; she’s proved herself to be a real talent, and while “I Am Not A Robot” is pop perfection as it stands, this hard-to-find remix is outstanding. If you’ve never heard of Bloodgroup, they’re an up and coming band from Iceland, specialising in a rather unusual brand of electropop (with occasional similarities to The Human League); this track comes from their latest album and is a good introduction to their music. The oldest track in the mix comes from Multiplex, but i’ll admit some confusion here; many years ago, a friend gave me a rip of Multiplex’s first album, including this track, shown as being “Compuphonic (Gimmik Rmx)”. Having obtained a proper edition of the album since then, it’s clearly similar to that track, but is nonetheless something else; i’ve included it in this mix because i like it, and if anyone can shed any light on precisely what this track really is, i’d be very grateful, as i’ve never been able to find out (it starts at 27’08”). [EDIT: i’ve since discovered this is actually the “Compuphonic (edit)”, which appears on the Toytronic compilation Neurokinetic].

Tim Exile‘s one of my favourite electronica acts, and while his first album was pretty forgettable, “Silicon Chop” was a foretaste of the brilliance that was to come. With the addition of singer Justine Suissa, Above and Beyond become Oceanlab, and this is Maor Levi‘s pretty full-on remix of one of their signature songs, “Sirens of the Sea”. Natasha Bedingfield‘s 2010 album Strip Me was a real breath of fresh air for pop, and this track demonstrates how catchy her songs have become. t.A.T.u. have recently announced their dissolution (for the time being at least), which is a shame as they’ve become increasingly interesting in the last few years; this splendid remix of “Running Blind” is another throwback to ’80s mannerisms, this time drawing on light rock. Yeah, i know, including Cheryl Cole may just make you think i’ve engaged in some Faustian pact for this mixtape, but when Ms. Cole puts her soulless, insipid music in the hands of enterprising producers like Digital Dog, it somehow emerges, Frankenstein-like, bristling with vitality; if you’re usually aggravated by Cheryl Cole’s music (and why on earth would you not be?), you’ll be very pleasantly surprised. Britney Spears, on the other hand, has convincingly bounced back to top form with her latest album Femme Fatale, proving you don’t have to dress in dead meat to get attention; “Trip To Your Heart” is a curiously effective amalgam of dirty electronica and cutesy melodies.

Returning to trance for a while, the only track by Delerium that i’ve ever enjoyed is “Silence”, and it’s due to the quality of Tiësto’s massive remix; i’ve only included the latter half of the track (which is over 11 minutes long), but that leaves more than enough to enjoy. While many acts acknowledge Kraftwerk’s influence, few have done so as openly as Si Begg’s short-lived S.I. Futures; “Eurostar” is a great little track, unashamedly pastiching Ralf, Florian et al. throughout. Above and Beyond‘s latest single is “Sun and Moon”, released last month; steer clear of the remixes EP, as they’re almost all tosh, but the four versions on the original EP are excellent, and Dennis Sheperd’s is an utter triumph. In his guise as Brothomstates, Lassi Nikko has been quiet for a full five years now, which makes one wonder if he’s moved on to other pursuits; the EP Rktic came out in 2004, and the title track is an infectious piece of IDM, regular beats underpinning the ever-evolving ideas going on above. These days Benn Jordan is embracing jazz, among other things, but in his Flashbulb heyday, glitched beats and electronics pervaded his music; “Moving Forward” is a fairly typical example, showing his kinship to Aphex Twin, combining hardcore rhythms with sweet, playful melodies. Similar in both jazz leanings and ferocity is Tim Jenkinson’s Squarepusher; Jenkinson doesn’t bother with nice tunes, though, allowing them to be just as fantastically messed up as everything else.

Perhaps the oddest track in the mix is Jimi Tenor‘s startling “recomposition” of the second movement of Boulez’s Messagesquisse; Deutsche Grammaphon’s ReComposed series hasn’t always been a great success, but Jimi Tenor’s album is amazing from start to finish. Creator of some of the most breathtaking beat-inspired music of all time, Aaron Funk’s Venetian Snares project seems to have got stuck in a rut in recent years; the 2004 album Huge Chrome Cylinder Box Unfolding comes from a time when Funk was ploughing the furrow for the first time, and still sounds fresh. All i know of Martin Freeland’s Man With No Name is his 1998 single “Vavoom!” (which i heard on Danny Rampling’s show back in the day); listening to it again for this mix makes me curious to hear if the rest is as slick as this. There are so many things i like about Aphex Twin‘s track “Vordhosbn”: there’s the sense of very fast and very slow tempi simultaneously, the brooding bass, child-like tunes, restrained dynamics—everything about it shows the consummate skill for which Richard James is suitably renowned. Although usually more at home in the realm of intricate blips and beats, Trentemøller‘s latest album crosses all kinds of boundaries; “Silver Surfer, Ghost Rider Go!!!” finds him in surprising but glorious retro territory. i was determined to include some Moderat, and “Les Grandes Marches” allows for a nice extended lull in the mix before its floor stomping bass kicks in. While my interest in Operator Please is starting to wane (they seem to have lost something from the glory days), this track from latest album Gloves shows they haven’t lost the ability to shake things up. Freezepop, on the other hand, came off the rails completely with their most recent offering; opening track “Natural Causes” is its solitary redeeming feature, but it’s a good one.

Autechre keep proving themselves capable of endless reinvention, with both ambient ideas and a regular pulse making a striking comeback in the last few years. This is one of my favourite tracks from Move Of Ten, the gentle thudding pulse gradually emerging from the digital layers above; like the Aphex Twin track, its quietness only makes it more hypnotic, a difference kind of ‘trance music’. Genuine trance returns one last time with a second Oceanlab track; Armin van Buuren’s remix of “Sky Falls Down” is a 10-minute epic (i’ve produced an edited version for this mix), made all the more thrilling by the powerful, incessant beat patterns that envelop the listener. And, saving the best for last, a pair of tracks by, in my opinion, the absolute masters of contemporary electronica. First is “Floccus” by Richard Devine; the incredibly complex material on his 2003 album Asect:Dsect doesn’t often settle down, but in this monster of a track it coalesces into a wonderfully pugilistic dance number, each bass hit like a punch to the stomach. i couldn’t really end with anyone other than the great Benn Lukas Boysen, a.k.a. Hecq, one of the most ridiculously skilled musicians ever to be let loose in the realm of electronics. i’ve opted for a track from one of his older albums, Bad Karma, where he teams up with Daniel Myer (a.k.a. Architect) to create this brief but delectable onslaught; it’s like a paean to dance music, the static note running through the middle the only fixed point in a torrent of beats, many of which stutter while others have been reduced to fragments, their shards firing outwards, forming new patterns.

150 minutes of dancefloor glory — here’s the tracklisting in full: