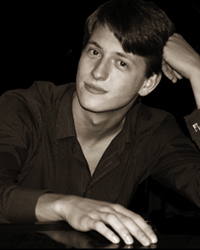 The second première in the “New Tunes on Old Fiddles” concert series was a work for viola d’amore and harpsichord, Who is Mr Grobe? by Duncan Ward, given its first performance last November by Catherine Mackintosh and Christopher Bucknall. Ward’s piece grew out of the apparent ‘mystery’ surrounding another piece in the concert programme, a Partita that may or may not have been composed by one Mr Grobe. The composer’s description of the work both whets the appetite—the use of figured bass in a new piece is a splendid idea—and also blunts it, when Ward speaks with glee about “new techniques” that are, of course, hardly as ‘new’ as he claims. Ward’s stated intention is to treat the duo as equals, promoting the harpsichord from being in an accompaniment role.

The first few minutes are engagingly unconventional, a percussive, pointillist introduction that suggests Ward is taking this pair of instrumental warhorses to a genuinely new place. But then, Ward abruptly abandons these promising ideas, and opts for an extended section of quasi-pastiche recitative, the viola d’amore heavy-laden with double-stops, while the harpsichord—despite the composer’s express statement to the contrary—is relegated to all-too-familiar fare, providing complementary cadential material. In light of the opening, such clear conventionality as this is both incongruous and bland. A later episode proves far more effective, the harpsichord exploring a curiously oblique chord sequence as the viola for the first time really starts to sing (the combination briefly bringing Schnittke to mind). It’s a temporary respite, though, swiftly forgotten in a return to recitative and a hollow coda that momentarily resurrects the percussive sounds from the opening. Presumably, Ward would justify such creative timidity by the issue he raises in the preamble about the viola d’amore’s specified tuning; far from exploring its potential in a modern setting however, it’s disappointing to hear how he’s allowed himself to be dominated by it.