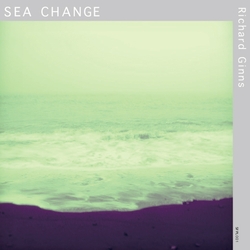 Nostalgia is a curious and dangerous thing. Its essential condition – memorialising past events, beautifying them into an idealised rendition of the original – is a kind of historical plastic surgery, and its prevalence in contemporary culture shows no sign of abating. At its best, in the realm of the hauntological, it can become a sharp, incisive exploration of half-remembered memories, in the process losing the pretence that nostalgia, unwittingly but unerringly, inflicts on its subject. At its worst, in the realm of Hipstamatic and the neo-Polaroid, it becomes a cosmetic conceit, a wistful yet phony affectation, positing the notion that things were better or more lovely ‘once upon a time’.

Richard Ginns’ Sea Change exists somewhere between these poles, although more at the Hipstamatic end of the continuum (the artwork features precisely this kind of imagery). Ginns acknowledges that his foray into “the memory of childhood visits to the seaside” is “completely personal”, and that truth presents a further difficulty emanating from nostalgia: in some ways it is so utterly personal that one can barely hope to engage without resorting to nostalgia of our own, making for a rather diffuse, even faintly solipsistic kind of empathy. This crystallises in Ginns’ hope that such imagery “produces a sensation of fondness and memory”; notwithstanding the fact that ‘memory’ isn’t a sensation, the kind of ‘fondness’ of which he speaks is, again, entirely personal, and he cannot rely on the fact that, merely by presenting the listener with ostensibly loaded material, we will instinctively relate to it and be drawn into his memories as though they were our own. Artistically, as anywhere else, nostalgia is indeed a curious and dangerous thing.

Beyond these conceptual obstacles, the six tracks on Sea Change function as variations on a theme. Ginns has restricted his sonic palette to a three-fold collection of timbres, two of which are abstract – wooden, percussive sounds and amorphous electronic drones – the third being an acoustic guitar. Opening track ‘Riverbank’ establishes the outlook for the album as a whole, percussive knocks blending into and serving to expand the soft plucked sounds of the guitar, while an omnipresent drone undulates between hovering quietly at a distance and powerfully throbbing in the foreground. The remaining five tracks do essentially the same thing, so perhaps a better descriptor than ‘variations’ is to liken them to paintings of the same thing from different vantage points. Ginns’ palette means that each track displays a marked contrast between hard and soft sounds, but as already mentioned, the boundaries between them are often nicely obscured.

All the same, Richard Ginns’ dependence on the act of nostalgia as an emotional vehicle is, to some extent, his undoing. On the one hand, there’s a sense of restraint here that is pleasant to experience – Ginns isn’t interesting in trying to grab our attention – but the flipside is that the music has an eternally introductory quality to it, forever suggesting we might be going somewhere, but ultimately moving in rather tiny circles, walking on eggshells. One can’t help feeling, with all the genteel washes and pastel sonic shadings, it’s all rather inconsequential: something begins, it happens, it ends – but did it really matter?

There are times when Ginns does something different, and it causes everything momentarily to lift. The opening of fourth track ‘Point Dunes’ is the most striking, where digitally slowed-down sounds glisten like small, half-lit edifices. The close interplay of dissonant clashes and celesta in the final, title track is another example, enlivening and in every sense sitting in relief to everything around them. But overall, these six tracks are akin to the kind of pale yellow watercolour vignettes one finds in any small gallery in any English seaside town. They’re soft, they’re comfortable, they’re personal, but they keep the audience at a distance in all but the most superficial way. Sea Change is by no means a bad album, but one can only give muted praise to an album that so doggedly refuses to venture beyond its comfort zone, while simultaneously expecting instant empathy for something so uniquely personal.