Despite being a time of year deeply entrenched in tradition (and not necessarily the worse for it), composers do from time to time bring a flash of innovation to Christmas. So, in the week leading up to the day itself, i’m going to explore a few of my seasonal favourites. 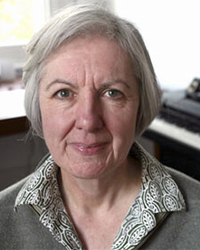 The first is Judith Weir‘s short carol Illuminare, Jerusalem, which dates from 1985. It was commissioned by King’s College, Cambridge, for their annual service of Nine Lessons and Carols, and has remained a regular item in their repertoire. The work combines two of Weir’s strongest qualities, simplicity and succinctness, taking as its subject a joyous mediæval Scottish text exhorting Jerusalem to be—in every sense—illuminated by what is taking place above and around it. Anyone familiar with the language of mystery plays will recognise something similar here, and Weir emphasises the quirky contours of the text in her music. The three verses are distributed to different sections of the choir; the opening verse, announcing both star and angels, is given to the trebles; the closing verse, detailing the supplanting of Herod by the more “richtous king” falls to the men alone. They’re combined in the central verse that delightfully describes the Magi as “Thre kingis of strenge regionis to thee ar cumin with lusty rout”—i doubt Caspar, Melchior and Balthasar have ever been depicted quite like that before. Each of these verses follows a similar pattern, a triplet-laden melody that begins low and gradually rises to a climax; but what follows is a stroke of genius. The refrain “Illuminare Jerusalem” is sung softly but pointedly, the second word drawn out, but the first delivered staccato and momentarily underpinned by deep organ pedal notes. It’s a totally unexpected way to set such a word, but it’s a compositional triumph, lending a weird and unsettling numinosity to the refrain, perfectly capturing the sentiments its ancient words are seeking to convey.

The piece is currently available on CD in two performances, one of which is on the recently-released Choral Music by the choir of Gonville and Caius College, Cambridge, an album devoted entirely to Weir’s music for choir. It’s also included on the excellent On Christmas Day, a double album by the choir of neighbouring King’s College, lavishly surveying the contemporary carols they’ve commissioned over the last twenty-or-so years. The King’s College disc arguably displays greater authority and experience, while the Gonville and Caius performance (aided by some seriously enthusiastic female sopranos) is somewhat clearer, so take your pick where those are concerned.

Better than both, though, in my view, is the performance given by the King’s College choir at their service of Nine Lessons and Carols in 2008. The choir brings out some rather amusing emphases on the text’s more overtly Scottish phrases, and the organ pedal notes have a juddering bass that makes those moments even more powerful.

Thanks, this was really interesting. I first heard this song recently and wanted to know more about it as it is so unusual!