It’s a curious and rather sad phenomenon that the majority of carols being composed in recent times don’t really have much to do with congregations. For the most part, composers these days write for the choir rather than the flock, but i’m sure that many of the most popular new carols attain their popularity in part due to how ‘singable’ they seem to listeners. That can’t always be true, of course; Judith Weir’s piece needs a choir (and a good one), but Peter Warlock’s exquisite melody would be perfectly singable by the average singer, and that’s also the case in my third seasonal favourite.

Composed in 1983, Paul Edwards‘ carol No Small Wonder has become well-known over the years, and is heard regularly today in more forward-thinking Christmas services and concerts. Like the Peter Warlock i wrote about yesterday, Edwards’ setting is focused on its melody, which is both restrained and straightforward, using simple repetitions through its first four bars, not doing anything dramatic. But again like the Warlock, it’s in the conclusion of the melody that Edwards allows himself to be more adventurous. Beginning low, an ascending sequence leads to the titular refrain, the simplicity of the tune countered by highly chromatic harmonies in the organ. The opening verse is given just to the sopranos, but the second is for the full choir unaccompanied, and Edwards cranks the chromaticism of this closing chord sequence a notch further; as the text (by Paul Wigmore) has at this point veered into darker territory—”but God gives his life on a cross”—it’s both effective and very striking. The mood brightens in the final verse, the choir beginning in unison, the organ building to a forte climax, but the text casts another shadow on the light; “and all to redeem my poor heart” sings the choir, and Edwards in response pushes this chord progression further, made more poignant by the organ once again dropping out. Despite starting relatively brightly, the sudden major key of the coda quickly solemnifies to a minor shade, providing a fittingly haunting end to what is a beautiful but bittersweet carol. 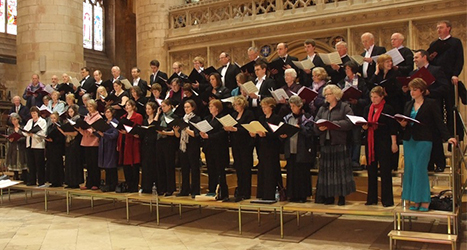 There are numerous recordings of No Small Wonder, and the one by Consortium (on the CD i mentioned yesterday) is one of the best; it’s taken at their distinctive sedate pace, and stands out from most performances due to the clarity of the inner parts, and the climactic third verse is very exciting. But better still, i think, is the recording made by The Saint Cecilia Singers on their nicely varied 2001 album Comfort and Joy. Recorded in the warm, soupy acoustic of Gloucester Cathedral (the choir’s home), it’s a splendid example of the skill and subtlety of this group of singers. The sopranos, in particular, are a joy to behold, and it also serves to demonstrate how gorgeously mellifluous the cathedral’s organ sounds. But they don’t milk it for a second, and despite the beauty of their performance, it never wavers from the delicate ambivalence of Edwards’ music.

[…] and difficulty to lightness and radiance. i wrote about Paul Edwards‘ No Small Wonder back in 2011, and it remains one of my favourite contemporary ‘lullaby’ carols. London Choral […]