One of the composers most strongly associated with this time of year is Michael Praetorius. His music dates from the early 17th century, and he is particularly well-known for his prolific treatments of Protestant hymns and songs. He harmonised numerous Christmas carols too, and there’s a kind of bold swagger to Praetorius’ approach that has no doubt helped to keep his music so beloved and oft-performed down the centuries. Composers have frequently arranged Praetorius’ music, and my fifth seasonal favourite is an impressive reimagining of one of the carols most associated with Praetorius, Es ist ein Ros entsprungen. 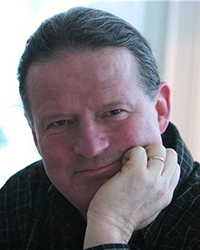 Swedish composer Jan Sandström will perhaps forever be known best for his wild and wonderful Motorbike Concerto, but his reworking of Praetorius’ material, known by its Swedish name Det är en ros utsprungen, is no less impressive. Composed in 1990, Sandström divides the singers into two choirs and then sets to work, seemingly stretching the original to infinity. Surrounded by voices that are static, Praetorius’ chords steadily make progress through what quickly becomes a vast ambient soup, a mystical cloud of notes hovering at the boundary between familiarity and strangeness. i wonder whether Sandström was influenced by the resurgence of ambient music that began in 1990, but regardless, the soundworld of his setting remains current, even prescient (today, bedroom composers would simply put Praetorius’ original through sound-stretching software for not dissimilar results). In such a highly immersive and intense atmosphere as this, the temptation is to linger, but Sandström bravely restricts himself to just one of the carol’s three verses; admittedly, its four-minute duration never feels enough, but each one of those minutes restores a badly-needed sense of wonder back to Christmas choral music.

Numerous attempts have been made to record this piece—and i say ‘attempts’, because, listening to some of them it’s clear the engineers really weren’t sure what to focus on, due to the nebulous nature of Sandström’s setting. Details appear to be relatively scarce, but they are there, and the best recordings tease them out without undermining the integrity of the whole. The chamber choir Mikrokosmos does this superbly well on their 2003 album of 20th century choral music, Villarosa, despite a relatively dry acoustic. Even richer is the recording by the Amadeus Choir on Weihnachtliche Chormusik: Unto Us a Child Is Born, released last year; under Nicol Matt’s direction, they really tap into the density of Sandström’s material, lingering over it and thereby adding a whole extra minute to the usual duration (but who can blame them?); the result is absolutely gorgeous. Recordings of live performances are dangerous, as just the slightest bit of audience noise—and, goodness knows, nothing audiences do is slight—will instantly rupture such fragile music. But here’s an example of one that succeeds marvellously, and it’s my favourite performance of the work, by the choir of King’s College, Cambridge; they’ve sung it for the last two years at their service of Nine Lessons and Carols, and while last year’s was rather too quiet for its own good, the account they gave in 2009 was outstanding, benefitting massively from the large chapel acoustic. It’s a shade less detailed than the two fine recordings i’ve mentioned, but everything about the atmosphere of this performance is just perfect.