Lists help you believe that there will be a future – by reminding you that the things you are listing have happened, in a time that was once a future, and that therefore there will be a future where things will happen that can then be listed and taken forward to remind us of a past where stuff was generated that made us believe there is a present and so, ultimately, a future. (Paul Morley, Words and Music)

Here we go again, then, with my own series of lists summarising what i believe to be the best music of the last 12 months. As usual, i’m going to strew caveats all over them—these lists are only what i presently believe to be the best and if i made them again in a few months’ time things would likely have changed, and in any case i haven’t heard every release this year, and while we’re on the subject there are still three days of the year left and we all know how much can happen in just three days—but regardless, these lists, in all their provisional tentativity, are, right here right now, definitive. Okay, so bearing all that in mind, let’s get the ball rolling with the ten EPs that have stood out most through the last 12 months.

10 | Hecq and Exillon – Spheres of Fury
It’s hardly worth repeating Ben Lukas Boysen’s 2009 claim that “beat-science can’t go any further with me”—his unique take on the world of grime and dubstep through the last couple of years has been blisteringly exciting. Spheres of Fury lives up to its title, a sleazy track with indelicate beats and bass—the accompanying video, featuring a wonderfully over-dramatised waterfight is hilarious—but it’s the last of the four tracks that’s even better. The “Stochastic Process remix By Techdiff” goes way beyond the scope of regular remixes, turning Hecq’s masterly original into a flawlessly-executed glitch-fest that ends with a twist, the sedate pace abruptly doubled, ending up as a frenzied dance track. [Juno Download]

9 | Fovea Hex – Three Beams
Clodagh Simonds doesn’t mess around when she gives her music to other musicians to play with. Her 2007 release Neither Speak Nor Remain Silent ended up in the hands of no less than The Hafler Trio, and this time around her latest songs have been given to Michael Begg, Colin Potter and William Basinski. With its detail and surface filigree, it must be hard to know where to start reworking Fovea Hex material, but this fine little EP (available only as a bonus CD with her new album) proves what’s possible. Predictably, Basinski’s is the least inventive, but the other two “beams” are outstanding, Begg and Potter refashioning the material into soft, surrounding ambient soundscapes, reverently celebrating those aspects that make the music of Fovea Hex as unique as it is. [Janet Records]

8 | Pablo – In Hurricanes
i know precisely nothing about Pablo, and only discovered this EP by accident when roaming the iTunes store some time back. There’s something of the retro quality that pervades so much synthpop at the moment, but it’s not a throwback; analogue synths are only one colour in Pablo’s palette. Each of the three songs has a lightly cheeky quality that’s most endearing; second track “Rock Bottom” is a delightful encouragement to those facing hard times: “son, you have to fall face first, hit rock bottom, to learn in life”. Pablo’s voice is splendid, and his heartfelt lyrics never feel trite, the music keeping things light and airy. [iTunes]

7 | Yugen – Ae’shT’aT’aQ
David Sani’s Yugen project is hard to define or even to describe. To some he’s better known through the lowercase music he’s released as Shinkei, but i find this new departure of his to be far more impressive. He brings to mind the soundworld of The Hafler Trio in Ae’shT’aT’aQ, an episodic work that explores some utterly captivating and immersive textures. The title is Aramaic for “he stood in silence”, and Sani has used (in his words) “some old middle east archival recordings” as source material, but they have been so extensively worked on and processed that there’s barely any clear trace of them. Yet, while the origins are indistinct, the grain of the music is tangibly evocative, which together with the fascinating techniques used throughout, sets this album apart from the majority of experimental electronics. [Free download]

6 | Ex Confusion – Too Late, They Are Gone
Ambient music can’t always withstand being presented in smaller, shorter formats, but this is where Atsuhito Omori’s music is most at home. and it’s the miniature size of these tracks (reviewed back in March) that makes them as powerful as they are; while lesser minds endlessly play with loops dully repeated ad nauseam, Omori condenses his ideas into pieces barely three or four minutes long. Their short span blurs the nature of their content (is it a looping fragment? or is it a part of something much larger?) thus freeing one to focus entirely on the resulting music, which—in part, again, due to the duration—is imbued with real fragility, enhanced by such titles as “Too Late, They Are Gone” and “It Doesn’t Last Forever” (one of my favourite tracks of the year). The five amuse-bouches on this EP are like the last streaks of colour in fading photographs—beautiful and very moving—and i love how Omori leaves the start and end of each track rough and unfinished, which only adds to its authenticity. [Bandcamp]

5 | Uh Huh Her – Black and Blue
Uh Huh Her have been around since 2007, but don’t seem to have found their sound until this year. Their particular marriage of synthpop and rock is finally given perfect expression on this EP, almost every track of which is a winner. Leisha Hailey and Camila Grey bring a delicate lyricism to their music that’s very impressive, and songs like “Never the Same” (with its simply gorgeous chorus) and “I’ve Had Enough” somehow navigate through the tropes of ballad and light rock, emerging with real emotional power. The more electronic tracks are certainly infectious, but despite their pace are kept relatively low-key (Hailey and Grey often singing low in their registers) and always at the service of the words; definitely some of the best songs released this year. [UhHuhHer.com]

4 | Clem Leek – Home Outside
i must admit to having mixed feelings about Clem Leek’s music, which has had as many (if not more) misses than hits. But when he gets it right, as he does on this 17-minute, single-track EP, the results are breathtaking. There’s a lovely balance between the deep, omnipresent richness of the underlying drone and the mournful, string-inflected wailing above (redolent of Richard Skelton). There are all kinds of sound sources involved in the piece’s dense texture, but their details are kept hazy and they thereby become more able to hint and evoke, without the need to be specific. Leek judges the duration perfectly, and insodoing has crafted his best work to date. [Bandcamp]

3 | Tetra – Live at Gallery of Modern Art
Tetra is an offshoot from the Australian group Ektoise (comprising Greg Reason and Jim Grundy), focusing primarily on ambient atmospherics. This 27-minute live improvisation is the second of just two releases the duo has created so far, both of which are available free. Guitars are at the epicentre of the piece, but they’re suffused and surrounded with shifting layers and clouds of sound, creating a huge sonic space. Apart from the oblique beauty of the music, what stands out most for me in this recording is the restraint, Reason and Grundy keeping things moving but never pushing them along, drifting but always with a discreet guiding sense of purpose. [Bandcamp]

2 | irr. app. (ext.) – The Famine Road/Celestial Laminate
After a number of years seemingly in the wilderness, Matt Waldron’s irr. app. (ext.) project has gloriously returned in 2011. The focus this year has been digital, Waldron releasing a slew of new and remastered material via his Bandcamp site. i’ve been unable to choose between these two; The Famine Road, a collaboration with Diana Rogerson and her noise duo Fistfuck, originally appeared in 2008 in an edition of just one copy (auctioned on eBay). Waldron has now made it available to everyone, together with two revised versions; all three are devastating in their abrasive impact, pushing Waldron’s extreme and surreal experimentalism to its limits. Celestial Laminate is no less dense, but begins with a superb drone-based piece, around which large quantities of sound have accreted. [Bandcamp] 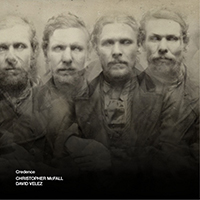 1 | Christopher McFall and David Velez – Credence
When it comes to working with field recordings, few demonstrate more innate understanding and technical control than Christopher McFall. In this remarkable collaboration with David Velez, McFall’s tendency to focus on the dark, amorphous nature of sound is coloured by overtly melodic material, seamlessly integrated into the sonic fabric. “Seamless” doesn’t really do it justice, though; Credence is, no doubt, a collage of elements, but the skill with which they are brought together, juxtaposed and intertwined is truly astonishing. Nothing ever feels remotely out of place; on the contrary, the way in which the piece comes across—as is usual for anything McFall is involved with—is like an unadorned field recording in its own right, such is the naturality of the result.

i dare say Credence won’t be for everyone; it’s gentle, yes—but equally it’s perhaps the most pitch black music i’ve ever heard. Like a cross between Twin Peaks and Lustmord, vast, yawning noises ponderously arise from unfathomable depths, emerging into an ominous nocturnal landscape. Evoking foghorns and organ pedals, deep melodic fragments circle like a funereal ground bass, at times made arboreal through the noises of birds and other creatures, othertimes aquatic with creaking boat wood. Although it projects an acute, vivid sense of isolation and even desolation, there’s much, much beauty to it all, which only makes it more moving. As only the best music can, Credence ultimately transcends words and communicates the immensity of its vision at an instinctual level. An absolute masterpiece. [Free download]