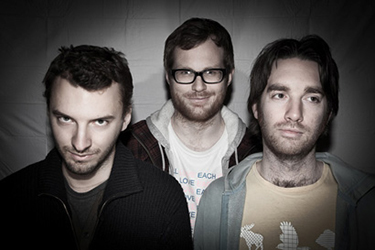 Turning away from the Lent series for a bit, for some time now i’ve been itching to write about Three Trapped Tigers. They’re a trio of musicians from London, and despite the fact they consist of keyboards, bass guitar and drums, despite the fact their music is given labels such as ‘math rock’ or ‘instrumental noise rock’, and despite the fact their live gigs subject one’s eardrums to the kind of pummelling one might expect from, say, Meshuggah, it just doesn’t feel right to describe them as a ‘band’. Superficially, they fit the mould, but their music is significantly different—in both conception and execution—from pretty much everyone else of that ilk.

Their debut album, Route One or Die, was released last year, and the fact i placed it second on my Best Albums of 2011 perhaps says something. It’s an astonishing tour de force of heavyweight invention and lightweight agility, but this shouldn’t have come as a surprise to anyone. For a full three years beforehand, Tom Rogerson (keyboards/vocals), Matt Calvert (guitar/electronics) and Adam Betts (drums) evolved their unique mode of expression through a series of 13 compositions; simply numbered in order rather than given names, these pieces were released on three EPs with similarly functional titles, EP (2008), EP2 (2009) and EP3 (2010). Released in relatively small quantities, these EPs have became hard to find, so they’ve recently been re-released both as digital downloads as well as on a “remastered” compilation album, Numbers: 1–13; more about these later.

To an extent, these 13 pieces come across as different aspects of the same argument. That’s not to suggest they’re tautological or narrow in scope, only that their consistency is such that they feel uncommonly unified; bringing them together on a compilation album makes perfect sense. Numbers 1 to 5 were released first, and together they establish the paradigm of everything to come. Melody, i would venture, is what matters most; despite frantically batting a single-pitch back and forth between octaves for most of the opening minute-and-a-half of 1, it’s a melodic idea, initially low in the mix, that gradually causes the entire tenor of the piece to shift into something very much more pensive and intimate; a squalling climax is allowed, but melody gets the final word. The nature of these melodies is disarmingly simple, their cheerful shape and timbre often making for a stark contrast with everything else. As such, they draw similarities with Aphex Twin, and while there are no tangible dance elements in Three Trapped Tigers’ music, the back and forth between gruffness and delicacy in 3 instantly brings Richard D. James to mind. In a broader sense, though, the biting drama in many of these pieces is directly related to their wild, accentuated shifts between loud and soft material, and this is made even more emphatic through use of convoluted rhythms and metres. 2, for example, is based on the recurring time-signature pattern 15/16 15/16 11/16 8/16, a stop-start effect that seems to stall the piece while simultaneously propelling it on; that piece is largely non-melodic, but in 8, where melody slowly infiltrates, the ferocity of the rhythmic language is such that the contrasts become overwhelming (drawing parallels with Deerhoof). Not all their music offers such extremes as these; 5 is a brisk but laid-back number focusing on the piano (think Benn Jordan), and 4 is the odd one out, a conceptual crescendo that only gradually emerges from distant guitar abstractions, effected as much if not more by timbral change than mere dynamic, moving between overlapping but well-defined and self-contained sections. 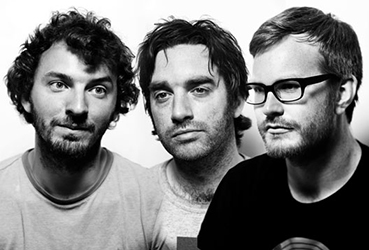 The result of these five opening gambits is that Three Trapped Tigers seem to have coalesced on a compositional approach that is primarily ‘modular’, where each piece is created through the juxtaposition of a number of distinct and sometimes sharply contrasting blocks of material. To that end, they bare little relation either to the conventional verse-chorus structures associated with pop/rock idioms or classical developmental forms. 6 and 8 are strikingly clear examples of this, both involving three different ideas; in 6, they’re relatively similar and follow each other in a straighforward way, but in 8 the differences are more marked, and the piece includes some abrupt halts that act as gear changes between the ideas. 9 is something of an oddity in their output, a soft, wistful piece in which the drums are entirely absent (‘Zil’, on their first album, is the only thing they’ve done that’s remotely similar); it’s akin in mood to Nine Inch Nails’ Still, built largely upon a single, gentle melodic thought that’s gradually expanded into an anthemic paean of glory. A climax isn’t always sought, though, and both 12 and 13 are for the most part content to explore their respective materials without feeling the need to unite around a certain point. It’s refreshing to hear conventions put so demonstrably on one side in pursuit of something more interesting, and even in 11, which inhabits relatively familiar rock territory, the boundaries are considerably wider than one might expect.

The trio’s music is at its best when the melting pot of ideas is complex; in 10, one of their finest tracks, numerous ideas are thrown in at once and it’s unclear what (if anything) is going to emerge and predominate, made yet more uncertain by some delightful non sequiturs and red herrings along the way. But the crowning achievement of these 13 pieces is 7, in which no fewer than five separate ideas flourish, very different in character, but the way they’re handled is perfect. Each one is given space to present itself, whereupon the complicated metres settle briefly into a regular pattern. It’s a brilliantly-judged bit of dramatic timing, calming the piece before everything gets suddenly hurled into a maelstrom middle 8 that develops a couple of the ideas, practically blasting them to bits in the process. An abrupt stop, and the previously unheard fifth idea follows, surprisingly languid, before the middle 8 asserts itself once more; another abrupt stop, and then the most significant of the melodies is repeated as a lengthy descending coda, growing ever more subdued. Words can’t really do justice to the majesty of this piece, which is undoubtedly one of the pinnacles of Three Trapped Tigers’ music to date.

i said above that it makes sense to bring these 13 pieces together on a compilation album; so it does, but unfortunately the so-called “remastering” they’ve received is just yet another merciless offensive in the seemingly unending loudness war. It would be true to say that the “remastered” version does capture quite faithfully the experience of the trio performing live; i was fortunate enough to catch them in Cheltenham a couple of weeks ago, as part of a short tour playing just these 13 pieces, and from the combined perspective of my brain and basilar membranes, the experience was both dazzlingly triumphant and punishing (but more the former). Yet arguably what makes Three Trapped Tigers as unique and special as i believe they are is precisely what gets lost when their music is subjected to this kind of unskilled and entirely unmusical butchery. The subtlety of each piece, the abrupt shifts between twee melodic episodes and incandescent onslaughts, the imaginatively created slabs and shards of not-quite-noise that impossibly bind together in what is already a crazily convoluted crucible of ideas, these are all rendered impotent and one-dimensional as a result of this process, diminishing the drama, narrowing the compositional scope and imagination, and also giving a pretty poor impression of the artistry and talent that these remarkable three musicians possess. It’s an utter shame; their relentless invention eludes easy categorisation, but this sort of treatment behaves as though what they were doing was entirely mainstream. Which they emphatically are not.

So if you’d like to hear these pieces from the perspective of a live event, and/or if your ears were long ago damaged beyond repair, go for the compilation and you won’t be disappointed. But if you want to hear something with infinitely more lucidity and magic, something that will still, i warn you, treat you mean but at the same time keep you oh-so keen with its stunning depth and variety, go for the digital downloads of the EPs in their original state, and be taken somewhere amazing.

The compilation CD can be ordered from the label, Blood and Biscuits, here. Digital downloads of the original three EPS can be had here, here and here, and can be streamed below. It’s worth noting that the digital downloads of the original EPs are slightly cheaper overall than the “remastered” compilation; all told, i think you know which way to go.