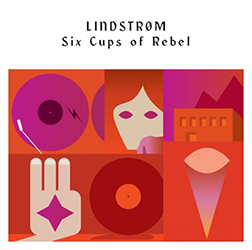 Having spent several weeks focusing on music of an introspective and ascetic nature, it’s time to let off some steam, and to that end let me flag up the latest release from Lindstrøm, titled Six Cups of Rebel. In nearly 10 years of music-making, this is only Hans-Peter Lindstrøm’s third album (which is not to suggest his output is small; he’s put out over twenty 12″ singles over the years), but the large-scale format clearly suits him. Six Cups of Rebel is a somewhat strange entity to try to define, opening in dazzling fashion with a cascading piece of organ minimalism (‘No Release’), its static, Steve Reich-like epicentre chasing itself in circles over a glowering pedal part of rising Shepard tones. None of which really suggests the full-on party atmosphere that’s about to ensue, with multitudinous but astutely-judged throwbacks to an earlier time; but Lindstrøm’s not just another statistic in the endless parade of latter-day retrophiliacs; he’s far more subtle, opting – for the most part – for whiffs of suggestion rather than a faceful of the past. Lindstrøm has assimilated his influences, and when they appear—funk and house gestures in ‘De Javu’; ’80s synth arpeggios and power chords in ‘Quiet Place to Live’—they’re merely elements in an experiment that’s very much bigger and more original.

Six Cups of Rebel is a diptych, and the transition between its panels is heralded by an amusing, faux-naïf fanfare (‘Call Me Anytime’), bringing to mind Franz Zappa’s more primitive synclavier pieces. The last three tracks pull the party in a new direction, disrupted by guitar riffs and breakbeats, culminating (with perhaps a wink to Luke Vibert) in an episode splashing around in the muddy squelch of the TB-303. That effectively brings proceedings to an end, as the closing track, ‘Hina’, mirrors the opener in similarly minimalistic fashion, dropping the straightforward beats and luxuriating in a rich palette of shifting timbres over unrelenting ostinatos.

It’s a strange album, no doubt, and i’ll admit to misgivings about certain aspects, but as a whole it’s so joyous and infectiously playful that the moments of mishap are easily forgotten.

The album can be streamed in its entirety below (courtesy of Grooveshark), and the CD can be ordered very cheaply from Juno Records, here.

[…] back in April, this album proves that when Hans-Peter Lindstrøm gets experimental the results are outstanding. […]