Emancipated beats: voidesque – as if it never existed

Despite my fondness for more avant-garde beat-oriented music, for a long time it’s been disappointing to see the current state of such idioms overshadowed by its champions. The likes of Aphex Twin, Autechre and Aaron Funk have, on the one hand, deeply moved and inspired composers and musicians to seek to explore what can be done with beats that doesn’t necessarily have anything to do with dancing, while on the other hand intimidating these same musicians to the point of pastiche and parody. It’s possible to count the really imaginative beat-artists of the last decade on one hand. All the more reason, then, to celebrate someone who brings some fresh invention to the genre.

Derek Jeppsen is a composer based in San Diego, California, a recent graduate in electroacoustic composition, and he piqued my interest when i read the description of his first release:

The album is really quite simple, and draws from certain things that may seem antiquated (drum samples), but this collection is about staying away from my “sound art” experiments and academic work. Many “popular” idioms make it to my music (use of a beat, repetition, etc.), but also many things that wouldn’t fit that context, especially in the rhythmic and form realms (polymeter, metric modulation, tempo changes), which often reflect the fact that I play Javanese gamelan professionally. The album is generally about creating an atmospheric artistic space, and including some stylized elements from dance music. There are also moments about randomness and aggression, and one of the tracks is an algorithmic composition, generalizing “beats” and playing with modal melodic generation. 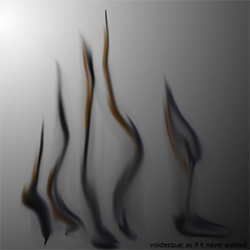 This isn’t the usual mix of descriptors one finds in music of this kind, and it’s gratifying to find that none of them are mere hype. Under his nom de guerre voidesque, Jeppsen’s first EP, as if it never existed, makes a very striking first impression. The three artists mentioned above exert themselves on Jeppsen’s music too (which he freely admits), but less as an éminence grise than as a collection of influential but nevertheless distant forces. Another way of putting it would be to say that these inspirations act as a series of points of departure in Jeppsen’s music rather than dictating both the style and idea of the journey.

Right from the opening track, ‘synaptic luck’, there are potent signs of individuality, in both the unexpectedly warm acoustic (which persists throughout) and the flexibility of the tempi, seamlessly shifting the underscore and making the beats interesting in their own right, emancipating them from being mere markers in a grid-like space. They turn out to be the focus of the piece, in fact, whereas at the start it was the various melodic ideas that seemed to offer most interest; it’s rather satisfying to have one’s initial sense of perspective proved to be otherwise. A similar atmosphere pervades in ‘the imaginary restitution’, a track that also places most emphasis on the beat structures while nicely confounding exactly what they are, while in ‘eusodius’ the beats become a remarkable, restless lattice that becomes increasingly hypnotic; it’s a brave composer who aspires to the intricate rhythmic evolutions of Autechre’s Untilted, but this track carries it off with real aplomb. It’s only fair to say that the EP’s longest track, ‘new threats’, is an aspiration too far; it opens interestingly enough, but is ultimately too monotonous to sustain its almost 10-minute duration.

But that’s the odd one out, and the remaining three tracks are each outstanding. ‘wrong door’, despite lasting a mere 106 seconds, inhabits the kind of cracked texture that Three Trapped Tigers might create in their gentler moments, and ‘masquerade’ is a beautiful exercise in understated aggression, carrying along a crude melody covered in razor barbs, contorted and cut-up by the beats, which in this context, despite their force, take a secondary role. Like ‘wrong door’, ‘masquerade’ impresses in part due to its brevity; one can’t help wanting to hear Jeppsen turn these textures into larger canvases, but as miniatures they’re no less superb. Yet it’s the final track, ‘previous’, that stands out most, a disarming introduction—a quiet ambient melody, sans beats—swiftly becoming a dialogue between naïve, playful melodic shapes and gritty, out-of-step rhythms. It’s a delight, the ear dancing back and forth between the two strands which, by design, can never quite coalesce.

There’s much to praise in this first voidesque release, which is a strikingly individual take on what would once have been called IDM. Jeppsen’s clearly a talent to look out for in the future.

as if it never existed can be streamed below, and purchased from the voidesque Bandcamp site; new voidesque material can be heard via Soundcloud.

[…] Jeppsen’s first album expands considerably on the convolutions of his debut EP (reviewed in April). The sophistication here is seriously impressive, & while echoes of IDM heroes can still be […]