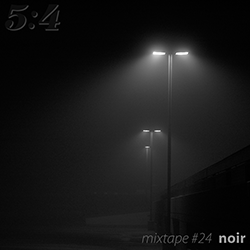 It’s time for a new mixtape, and once again it reflects my current predilections and listening habits. Film noir, and particularly its musical analogues, are much on my mind at present, so the new mixtape reflects that, drawing on 23 examples of muted monochrome. The similarities between these pieces are often very strong, yet the range of language used is considerable. The Kilimanjaro Darkjazz Ensemble, Tor Lundvall, David Lynch and This Will Destroy You opt for heavy-laden music pulled by a sluggish pulse, throwbacks to the past from the cusp of an apocalyptic future. Tangentially related, Ulver, Demdike Stare and Asher find regularity in the artefacts that litter the surface of their hauntological materials. Gareth Davis and Frances-Marie Uitti, Aphex Twin, Paul D. Miller (DJ Spooky) and Cosey Fanni Tutti and Philippe Petit all offer a kind of fin de siècle melodic scrutiny, while First Human Ferro, Access to Arasaka, Angelo Badalamenti and Sleepy Town Manufacture and Unit 21 grimly obsess over chord progressions, some fragile, some aching with nostalgia.
Naked City go further by doing less, unable to move much beyond a bleak repeating chord, while Andrew Liles (remixed here by Jonathan Coleclough) is similarly inert, viscous music drifting slowly in a void. Johan Söderqvist, Deaf Center, Ben Lukas Boysen (Hecq) and The Stranger (Leyland Kirby) tease out the tacet malevolence ubiquitous within noir’s unique atmosphere. Jonathan Coleclough retreats into a despair of off-silent impenetrabilia, but the most substantial example of that comes at the centre of the mix. The apparent ‘absences’ in Rebecca Saunders‘ music are as significant and disorienting—if not more than—the sounds themselves, pulling the listener into a sightless struggle against, seemingly, reality itself.

Two hours of silhouettes and shadows; here’s the tracklisting in full:

Hey – I stumbled across this while looking into some Badalementi chord progressions… what a great find.
I’ll be trawling for weeks I’m sure. Thanks for all of this.
I’m also a composer/producer/musician of sorts and currently based not so far from you in the vale of the white horse…
prost!