In Memoriam: Elliott Carter – Heart, not so heavy as mine 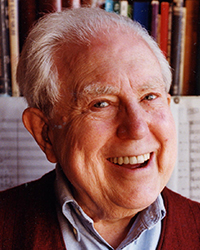 Words by E. E. Cummings that came to mind last night following the first reports of the death of Elliott Carter, at the age of 103. i know i wasn’t alone in feeling an intensely heavy sadness at the news; one tended to think Carter was so single-mindedly alive that death couldn’t quite see the point in claiming him. But Carter is, at last, gone from us, and to mark his passing, here’s a relatively early work of his that seems rather fitting. It’s from a concert in February this year given by the BBC Singers conducted by Philippe Bach.

Carter’s setting of Emily Dickinson’s poem ‘Heart, not so heavy as mine’ dates from 1938. It embraces the wistful sentiment of the words, the first two stanzas preoccupied by a single tonality (B-flat minor), as though grounded, fixed in place. As the words start to become imaginative, freed from their present isolation, Carter immediately switches to lively counterpoint and a wider harmonic palette, the voices now soaring over thoughts of birds and brooks, in a burst of reverie that’s all the more moving in light of its conclusion; for, just as it reaches a climax (“Without the knowing why”), the bass and tenor voices immediately return to the opening stanza, instantly bursting the song’s bubble. These words continue to infiltrate the optimistic coda, but Carter ultimately avoids ambivalence by letting the major tonality prevail.

It’s a piece that smiles albeit with tears in its eyes, which perhaps couldn’t be more appropriate. Very truly, a great man is gone.

Heart, not so heavy as mine,
Wending late home,
As it passed my window
Whistled itself a tune,—

A careless snatch, a ballad,
A ditty of the street;
Yet to my irritated ear
An anodyne so sweet,

It was as if a bobolink,
Sauntering this way,
Carolled and mused and carolled,
Then bubbled slow away.

It was as if a chirping brook
Upon a toilsome way
Set bleeding feet to minuets
Without the knowing why.

To-morrow, night will come again,
Weary, perhaps, and sore.
Ah, bugle, by my window,
I pray you stroll once more!

sad, sad, sad news.
passing away of man, even so aged as he is, is a serious loss.
requiescat in pace…