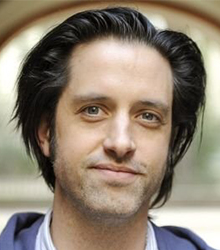 If there’s one thing practically guaranteed every year at the Huddersfield Contemporary Music Festival, it’s the presence of a string quartet that approaches the medium from a radical perspective, one that does away, almost entirely, with its traditions and connotations. The next work in my Lent series focusing on new quartets is just such a piece: Simon Steen-Andersen‘s String Quartet No. 2, given its first UK performance at HCMF 2012 by the Bozzini Quartet. It wasn’t so very long ago, writing about another recent quartet, Hans Abrahamsen’s String Quartet No. 4, that i critiqued quite harshly music that stretched its modest quota of restricted material far, far too thinly, with mind-numbing results. By contrast, Steen-Andersen demonstrates that it’s possible to confine almost every aspect of the work while maintaining high levels of invention and interest.

Steen-Andersen’s aim is to shift “the perspective from the body of the instruments and the left hand actions (normally activated by the bows) to the right arm movements and the bows themselves (activated by the strings).” To that end, his String Quartet No. 2 speaks with a single tone of voice derived from the heavily-amplified sounds captured by contact microphones placed onto the quartet’s bows. This effect is akin to the macro lens on a camera; things unobtrusive and unnoticed become writ large and concomitantly strange and unearthly. From the outset, this has the effect of bifurcating one’s understanding of what is being heard; on the one hand, it sounds like what it is, a greatly magnified presentation of small acoustic objects; yet there’s also a pronounced quasi-electronic aspect to the sounds as well. All told, Steen-Andersen produces from the quartet the effect of a hard-to-identify field recording, the brisk shifts of its textured surface positioned just beyond the cusp of recognition.

As already intimated, Steen-Andersen limits himself to a small palette of sounds, colours and registers; furthermore, there’s often little sense of four distinct players, in no small part due to the very narrow spacial field from which the quartet’s combined efforts emerge. Structurally, some may disagree but i hear it as an episodic work, demarcated by such aspects as behaviour and density, broken up further through passages of buzzing pitches (the only occasions when texture becomes of secondary importance) and carefully placed pauses. Beyond this, it’s a difficult piece to describe—but it’s a futile endeavour in any event; the String Quartet No. 2 is all about minutiae, and the sense that we’re hearing the incidental, microscopic sounds that occur during other activities. The questions constantly arise: what am i hearing? how are these sounds being made?—and therein lies the achievement of this deeply fascinating piece.