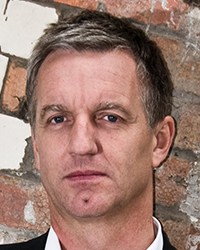 The next work featured in my Lent series is Chambre privée, a new quartet from Christopher Fox which was premièred at Huddersfield last November. It’s a piece i find interesting, but not really at all for the reasons the composer is intending. The trouble is that potentially fascinating conceit described in the programme note—or, rather, the sounds his quartet makes with regard to that conceit. Their behaviour for much of the piece is, as Fox states, “tentative”, guarded even. But not, as one might imagine, toward one another; on the contrary, the quartet immediately coalesces into a homogeneous unit articulating an extended series of soft, meticulously placed chords. Why do they act together? why are they so cautious? so restrained? so careful? The chords themselves aren’t particularly suggestive of anything, per se (although the ear makes a progression of sorts from them), yet they overwhelmingly sound sculpted, considered, not at all the product of spontaneity arising from the blank pages of non-history. Being spontaneous doesn’t necessarily connote chaos, of course, but—considering these players have supposedly nothing upon which to predicate their actions—is it really commensurate with instantaneous, long-term order?

In that sense, to my ear, it fails entirely, yet if one disregards Christopher Fox’s conceit and simply allows the quartet’s music to be without its putative context, Chambre privée becomes something rather magical; inscrutable, to be sure, but surprisingly engaging nonetheless. The single-mindedness of the players, working as a unit towards a solitary goal, combined with their imperturbable solemnity lends the work a distinct air of both ceremony and intimacy. Privée indeed—hearing this intense yet unknowable act unfold feels a little like intruding (or at least spectating) on a private ritual. The austerity of the piece, both with respect to Fox’s material and the general demeanour of the quartet, is central to this character, and only becomes all the more fascinating when it later develops into a bewildering texture of slowly sliding lines (sounding strikingly similar to the music of Chiyoko Szlavnics). Within his context, Fox regards this point in the piece as one of “breakdown”, but musically that description seems to make little sense, sounding instead like the latest stage in an exciting ongoing evolution. However, Fox forces the piece to break down, contriving a weird conclusion involving the literal departure of the first violinist, who retunes and begins a lengthy bout of endless arpeggios, overshadowing the remaining trio who opt to imitate the sound of viols.

It’s unfortunate Christopher Fox didn’t imbue his quartet with some of the very real spontaneity and experimental outlook that he himself demonstrates so often. Yet despite its frustrations, disappointments and downright oddness, i can’t help finding Chambre privée a highly rewarding and thought-provoking listen. The world première performance at HCMF 2012 was given by the Bozzini Quartet.