Formalised and spontaneous: Liza Lim – Tongue of the Invisible 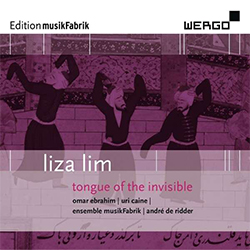 New and not-so-new CD and digital releases have had pretty short shrift on 5:4 this year, which might suggest not much has been making an impression. Not only is that wrong, it’s almost ludicrously so in the case of the most recent CD in Wergo’s ongoing ‘edition musikFabrik’ series. i’ve commented many times before on how more interesting composers are concomitantly harder to find represented on disc, and that’s especially true of Australian Liza Lim. When i first became acquainted with Lim’s music—17 years ago, in the heady, below-stairs performance space at Huddersfield’s Lawrence Batley Theatre—it was entirely impossible, and little has changed since then, aside from a CD on the hat[now]ART label and a smattering of works on several of the excellent discs put out by Huddersfield University on their label. Wergo have therefore done listeners a great service in making available one of Lim’s more recent and substantial works, Tongue of the Invisible.

Aside from her three operas, Tongue of the Invisible is Lim’s lengthiest work, and each of its 54 minutes are directed towards the most ambitious and compelling dramatic ends. The piece is centred around texts by the fourteenth century Persian Sufi poet Hāfez, texts that both explore and evoke ecstatic love in passages that are almost eye-watering in their combination of cool observation and passionate seduction (faintly reminiscent of the Song of Songs). Lim’s music has always been at a cluster of cutting edges, as much in terms of melding non-western thought and culture (Lim is of Chinese descent) into avant-garde music practice as in her contribution to contemporary music’s ongoing reassessment of what instruments can do, both independently and together. That suggests a kind of soft/hard dichotomy, and that’s precisely what one encounters time and time again in Lim’s music, and especially so in Tongue of the Invisible. Composed for a baritone solo, improvising pianist and an ensemble of 16 musicians, the work’s distinct character is summarised in the following ‘project description’ that appears in the preface to the score:

Improvisation as unpredictable play
Song as longing for the Divine
Musicians as listeners, drunk with desire
The Concert Hall as a tavern, a meeting-place between world and ‘other’

The work is structured as an unfolding narrative of ʻfixedʼ and ʻopenʼ (guided improvised forms) where the creative
contribution of the musicians enacts a metaphor for pathways for renewal and the creation of multiplicity of meaning that is in
dialogue with the composed music.

The improvisational element of the work—what Lim has elsewhere described as an “ecology of collaboration”—is therefore paramount, and makes itself felt within the first few bars, as various independent solo passages begin at prescribed points while other instruments are given instructions rather than specifics. Ritualism is a recurring presence in Lim’s work, and perhaps never more so than here; Tongue of the Invisible is founded upon drones, and at the start of the piece this acts as a kind of sonic palate cleanser, ushering us into a soundspace that’s entirely removed from the mundanities of the here and now. Lim aids this progression through a deliberately slow introduction, only gradually gathering materials and gaining momentum. Only when the atmosphere has built almost to breaking point—almost halfway through this opening movement—does the baritone enter, not so much breaking the spell as becoming its catalyst. This aspect is in fact one of many masterstrokes to be heard in the piece; despite the intensity of the poetry, it would be so easy to derail or simply destroy it with cheap romanticism or empty histrionics. Lim opts for neither, composing a vocal part that, despite a certain stylised sheen, sounds about as honest and ‘un-composed’ as one could imagine. In a way not dissimilar to that of George Crumb, the baritone doesn’t just sing his lines, he embodies them in an act of hyper-expressive effusion.

The ensemble are more than mere observers; they act—usually with the sense of being a single, multifaceted entity—to establish contexts, to encircle and support the baritone, as well as to extend and reinforce his sentiments. The immense instrumental climax to the third movement is an especially impressive example of this, but more often than not they are occupied with delicate material, creating translucent textures in which their presence is felt but details are hard to ascertain. Three of the eight movements are instrumental, but far from being interludes or entr’actes, they are substantial continuations of the work’s ongoing atmosphere and argument. Two of them are improvised; the fifth movement, ‘The roots of the world are entwined in the wind’, focuses on nine elaborate oboe solos (excerpt below), while the sixth movement comprises little more than an instruction to the pianist to improvise “based on materials from Movements II and IV”. Throughout the work, the piano is principally concerned with revisiting material in this way; it’s hard to describe this behaviour as ‘unifying’ exactly, but it is at least a thread of continuity that helps to bind the song-cycle together. 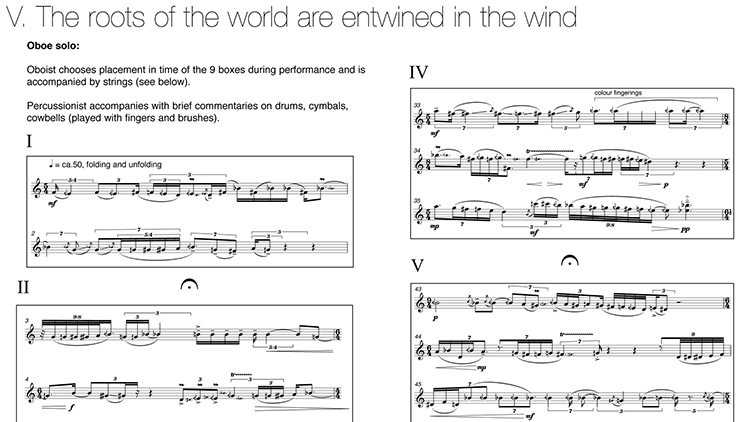 Lim dedicated the work to musikFabrik in celebration of their 20th birthday. Directed by André de Ridder, their performance of it as captured on this disc is superb. The sense of interconnectedness and understanding between the players is palpable; Uri Caine’s piano improvisations always sound considered and relevant, while baritone Omar Ebrahim needs to be heard to be believed—his is an astounding performance, demonstrating that love poetry can pack one hell of a punch.

Tongue of the Invisible is a searching, searing work, never for a moment relinquishing its grip on the intense subject matter at its core. As such, emotionally speaking, it can seem exhausting—indeed, the huge penultimate movement, Encircling its towers with a silver coronet of song, almost seems too much to take (for the performers as much as us). But the pervading air of ritual keeps things in check, which may seem an odd phrase to use for such a heightened sense of reality as this, yet this seeming opposition is precisely what Liza Lim does so well in her music, and which is exemplified so brilliantly in this piece, allowing material and players to be both formalised and spontaneous. That’s the essence of Tongue of the Invisible, and it’s precisely what gives it so much emotive and intellectual power.

Tongue of the Invisible CD released on WERGO | Liza Lim

[…] it for The Sunday Times ’100 Records of the Year’. Simon Cummings in his blog 5:4 says: ‘Tongue of the Invisible is a searching, searing work, never for a moment […]

[…] back in October, the single work on this disc is a hugely successful testament to the ways in which improvised […]

[…] was surprised to realise recently that, apart from a CD review last year, the penultimate composer in my Lent Series, Liza Lim, has not yet been featured on 5:4. […]