An inner conflict of cosmic proportions: Man Without Country 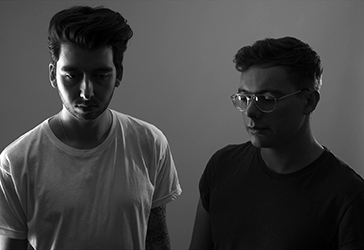 Many’s the time i decide to write about a composer, group or artist and find it almost unconscionable that i haven’t done so already. That’s overwhelmingly the case with Man Without Country, a duo from south Wales whose unique brand of dreamy electronic pop has been doing the rounds for a little over two years. Indeed, it’s tempting to begin with an apology for not featuring them sooner. Still, definitely better late than never.

If you were to combine the heartfelt melancholy of Keane, the aloof, breathy detachment of Pet Shop Boys, the late-night wistfulness of Go West and the viscous, transcendent haze of M83, you’d begin to approximate the essence of Man Without Country’s music. Choosing their name, they say, as it “carries an instant intrigue […] it derives from ‘a sense of not belonging’ “, Tomas Greenhalf and Ryan James hit the ground running two summers ago with their first EP, King Complex. Both in its entirety and in just the title track (which remains one of their best) can be heard the duo’s predilection for a mode of expression that employs both the gentlest of soft edges as well as timbres and textures that cut like razor wire. It’s a dichotomy that works because it must, being the means to what is ultimately a very emotional end, declared with unflinching honesty in their lyrics.

Those lines from ‘King Complex’ are as conflicted as Ryan James’ vocal delivery, encompassing pity, rage, spite, disgust and perhaps (reading between the lines) even jealousy. The extent of struggle is even more apparent in the verbal discord of the second chorus, where the antagonist is first likened to a “mild irritation like a stone in my shoe” but then immediately characterised as “the feeling of gloom/That empties the room”. One gets the sense of an anger that would ideally be wished away, which doesn’t in any way lessen the intensity of that anger, but coats it in flecks of guilt and even possibly a degree of self-loathing. Nonetheless, the closing lines are unequivocal: “You are a true parasite/And you’re the bane of my life”.

The song sets an angst-ridden tone that the EP and their debut album, Foe, released in June 2012, explore much further. ‘Angst’ doesn’t even begin to cover it though; these are songs conveying an inner conflict of cosmic proportions, unchecked diatribes hurled into the night sky with a passion that only destroyed love can engender. That such hurt can find expression in songs that move so easily between the intimacy of a ballad or lament and the boundless soar and pump of an anthem is remarkable and testifies not just to Greenhalf and James’ musical skill but also to their ability to detach from the intense fug of such personal stuff and forge a fascinating variety of song-shaped forms, every one of which is uncommonly beautiful. The conflict continues: ‘Foe’ hands over vocal duties to an electronic female voice, blunting the impact of the otherwise forceful lyrics. ‘Puppets’, on the other hand, returns Ryan James to the spotlight but now declaring the subject’s flaws as “not worthy of news”—yet clearly worthy of 3½ minutes of dressing down. Songs like ‘Clipped Wings’ and ‘Ebb and Flow’ are principally softer acts of introspection, but in some ways Man Without Country sound most right and true when driven by invective. In lesser hands (and look, they’re everywhere), songs of this spirit descend into the blandest clichés of trite disaffection and cloned emo misanthropy. But i have to come back to a word used earlier, which may just be the most important facet of every line of every Man Without Country song: love. Through every ounce of aggression and disappointment, there’s the omnipresence of love—love that has been damaged, spurned, mistreated, ignored and maligned, but which has, in turn, sowed the seeds of an exquisite, pained lyric. It is some of the most gorgeously painted vitriol you’ll ever hear. 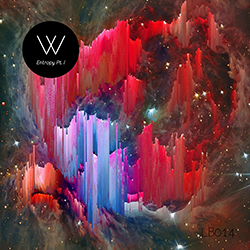 Having been relatively quiet since the end of last year, Man Without Country have recently released a new EP, Entropy Pt. 1. Through the four songs and 21 minutes, Ryan James’ lyrics have retreated in terms of clarity (the lyrics are often very hard to make out) but not in fortitude. If anything, the songs have outgrown themselves and become vast anti-paeans, the scale of their themes requiring not just musical but physical space. In short, they sound big, their scale reinforced by unstoppable percussion and a rare, aching lyricism that enables the songs to attain dizzying heights. ‘Catfish’ ploughs a more restrained furrow—enhanced by the light presence of Danish singer Lisa Alma—but it’s closing track ‘Deadsea’ that’s most striking. Moving with a steady, stately gait it dives into the group’s latent ambient aspect as never before, its closing two minutes fizzing and drifting away into multi-coloured remnants of harmony. It sounds like a glorious valediction, but one desperately hopes that there will be a part two hot on its heels. This is about as good as contemporary electronic pop gets.

The King Complex EP can be streamed in its entirety below, as can two tracks from the new Entropy EP (‘Deadsea’ can currently be downloaded free too), and many more tracks can be heard via their SoundCloud site. Almost all of their output can be bought very cheaply direct from the band, in both lossless and lossy formats, via their online store (the one exception being their 9-track Migrating Clay Pigeon remix EP, which continues to languish on the terminally extortionate Beatport), and of course they’re also available on iTunes. Man Without Country are poised to start a short UK tour too (details here), so do check them out if they’re in your area.

[…] my recent appraisal of Man Without Country, i noted how, with this remarkable EP, “the songs have outgrown themselves & become vast […]