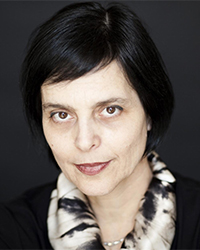 The next piece in my Lent Series celebrating women composers is by the Israeli Chaya Czernowin. Czernowin left Israel in her 20s, studying first in Germany and then the United States (her teachers included Brian Ferneyhough and Roger Reynolds), where she remains today, in Boston. One of the features of her work that i find most engaging is the way it absolutely demands repeated listenings. That’s not to suggest one can’t take away anything of value in a single hearing, only that one’s always aware there is very much more to be grasped, and Czernowin’s work is sufficiently interesting that there’s plenty of motivation to return to it on later occasions. Her 1996 work Afatsim is just such a piece.

Composed for an ensemble of nine players, spaced apart as much as possible, Czernowin subdivides the players into four groups, or to use her term, “composite instruments” (see programme note, below). However, due both to the way these ‘instruments’ are presented and also the way their materials are intermingled, shared, focused upon and so on, means that it is hard, sometimes impossible to perceive the groupings in an obvious way. This obfuscation seems to help rather than hinder the piece, however, the textures of which are often difficult to get hold of, particularly at the beginning. The soundworld of Afatsim is one where instruments are not, for the most part, played according to convention, establishing a kind of aural ‘no man’s land’ where sources feel unknowable, save for the persistent early squeal of a recognisable bass clarinet. While there are times when the music sounds a little dated (redolent of the bandwagon-hopping interest in complexity that bedevilled the ’90s), Czernowin’s dense textures are characterised by considerable restraint. Initially the material is tentative (even the timp sounds guarded), instruments are teased and tickled—restraint that’s as much timbral as dynamic; later, they become withdrawn nearly to the point of inaudibility, expressed in whispers and sighs. Only slowly does the work attain real solidity, but even then, at its most heightened point, the music comes apart in spasms, a process spotlighted by a dying chinese cymbal. There are two instances in the piece where sonic certitude seems almost incongruous—the aforementioned timp, as well as deep piano notes towards the end—but if anything these sounds emphasise just how timbrally uncertain is the context within which they’re heard. Having united, the ensemble finds a sense of momentum but it coalesces on a strained, heavy-laden texture that sluggishly culminates in deep growling, ending with a curious little grunt.

Deeply, deeply strange—but if you’re anything like me you’ll immediately want to hear it again. And again.

Afatsim (Hebrew) are galls. Webster’s dictionary defines galls as a swelling or excrescence of the tissues of a plant that results from the attack of parasites, often distinguished by a characteristic shape of color. For example, alpogall is a hard brittle spherical body that is about the size of a hickory nut and is produced on the twigs of an oak by a gall wasp.
Searching for an alternative to a linear dramatic temporal experience, this piece suggested a way in which time might be disfigured like an infestation of galls on the surface continuity of a branch. The nonet is subdivided into four composite instruments: viola and bass flute, violin and oboe, cello and clarinet, and piano, double bass and percussion. In each section of the piece, the interrelationships of this “quartet” changes. There might be four disparate polyphonic voices of this composite quartet, or the entire ensemble might magnify a single line of the flute, when in fact, this line had originally been conceived as only a single voice of pre-composed viola/flute material. Consequently, the perspective on the material and the ensemble zooms in and out as if the “lens” of the listener was in constant flux. Furthermore, coherent, well characterized (even eccentric), extremely gestured and physical musical behaviours are fragmented or torn off into “sentences,” “half sentences,” “words,” and “half words.” These then are recombined to create new “utterances.” This disfigurement subverts the ability for linear prediction, but does not altogether discard a resynthesized “strange” and implicit narrative continuity, on which like the branch, the disfigurement is grafted. The piece is dedicated to the Ensemble Recherché.