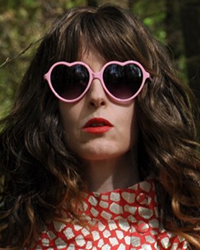 As it’s St Patrick’s Day, who better to feature next in my Lent Series than one of the most brilliant voices in Irish contemporary music, Jennifer Walshe. In appraising Walshe’s work, it’s impressive enough to consider just the seemingly boundless intricacies of her imagination. Famously, Walshe has fabricated the existence of a group of composers under the umbrella collective Grúpat, each with their own very extensive back-stories and discrete artistic personalities. Many of Walshe’s compositions are attributed to these Grúpat figures, pseudepigrapha that demonstrate her remarkable breadth of compositional interest. But equal to this imaginative power is Walshe’s virtuosity as a vocal performer; it’s not always clear what on earth is coming out of her mouth (or indeed why), but such questions are hard to formulate when one’s grappling with her incredible dexterity and stamina, both of which have practically become the stuff of legend.

This performance comes from a recording made at the 2009 Comprovise Festival in Cologne. Billed on the festival’s website as The Wasistas of Thereswhere by The Dowager Marchylove, it is in fact a piece by a different Walshe persona, Detleva Verens, entitled Scintillia. According to Walshe’s fictional biography, Detleva Verens is an Estonian composer now based in Tallaght, who

works to explore the spatialisation of sound and the sonorousness of space. She considers the cybernetic systems operating in natural phenomena and the chaotic nature of complex technological systems. Verens operates in the paradoxical, liminal and microscopic. Often working with acoustic micro-sounds, she is interested in the deployment of non-musical organisational structures. According to Verens, music doesn’t merely have a shape but shapes the world. She says the two most important events in her life were examples of music that changed the world we live in: the Singing Revolution, the series of spontaneous mass demonstrations of singing all over Estonia, from 1987 to 1991, that ended in Estonia winning its independence from Soviet Russia; and “Everybody”, Estonia’s winning entry in the 2001 Eurovision Song Contest, performed by Tanel Padar, Dave Benton and 2XL, which was the first Eurovision win by a former member of the USSR and also the first grand-prize win by a black performer. Detleva Verens considers herself working in the tradition of revolutionary Estonian musical power.

(More misinformation about Verens can be found here and there’s an illustrated PDF here.)

Returning to Scintillia, it would be easy to believe—as i initially did—that electronics are involved (in fact, Walshe uses nothing more than an empty film canister and a paper and comb to modulate her voice). Over a faint low rumble, Walshe initially focuses on whispers, inhalations and sibilance, amplified such that her voice forms strange, inscrutable shapes in the air. These shapes gradually shift, both in terms of morphology and intensity, becoming increasingly rapid and gaining pitch focus in the form of drones articulated over a host of ululating tongue gymnastics. There’s the sense that this could be the beginning of something—a melody perhaps, or a word—but the music is sufficiently disrupted that it simply cannot advance. As such, Scintillia conveys a palpable sense of frustration in the face of desperate expressive fervour—something that can be heard in many of Walshe’s pieces, and which makes them so heart-stoppingly captivating.

Scintillia consists of three huge scores made of bamboo, willow and wicker. One score is based on satellite photographs of a forest in South Dublin County; the other two scores are based on constellation positions and satellite orbits in the sky over Tallaght on 15 March 2007. In constructing the scores from bamboo and wicker, Verens was influenced by the stick charts of the Micronesian Marshall Islanders. The stick charts of the Marshallese are used as navigational aids for rowing canoes between islands, and notate ocean currents and swells rather than geographical formations. Verens writes “The stick charts fascinate me because they are a completely different way of thinking about mapping, being concerned with patterns and flows or energy and how these flows are affected by objects that exist within them. This mapping methodology seemed perfectly suited to sound.” Similarly, Verens has often referred to Hesse’s The Glass Bead Game, noting “Music doesn’t merely have a shape but shapes the world.” In Scintillia, Verens plays a sort of glass bead game with space and sound, highlighting connections between constellations, geography, sound and energy, and promoting a very unique type of musical harmony.

This piece is on Walshe’s superb but hard-to-find 2009 CD The Wasistas Of Thereswhere (copies available here and here); this version can be heard below via the Grúpat SoundCloud stream.