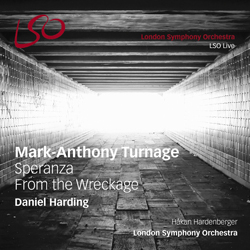 Alongside the collection of soloistic new releases i recently reviewed, several impressive new CDs of orchestral and ensemble music have emerged lately. One of the most surprising, from an aesthetic perspective, is the latest disc of Mark-Anthony Turnage‘s music released by LSO Live. The surprise is encapsulated in the titles of the two works on the CD, Speranza and From the Wreckage, both titles that are inherently optimistic in outlook. For a composer who has hitherto created countless works from mining deep seams of despair and desolation, this is quite the volte face, but as Turnage himself commented prior to Speranza‘s first performance last year, it’s all too easy self-indulgently to “wallow in misery and darkness”. That’s not to suggest Turnage’s tone in these works is chipper, exactly, but there is, particularly in parts of From the Wreckage, a spring in the music’s step of a thoroughly different kind from the grotesque forms of bounce and stumble more common in his output. Beyond this, there’s a quite deliberate move towards that most disquieting concept for the avant garde, accessibility. From the Wreckage—a work that’s by no means as blasted as its title suggests—conjures up majestic sweeping vistas, and even when it lurches into more violent territory, it’s more obstreperous than angry, smarting rather than wounded. Even more accessible is Speranza, that title—”hope”—being applied to each of the work’s four movements in different languages. Melody permeates almost every moment of them, by turns muscular, child-like, mournful, angular, quiescent. Turnage allows the orchestra to pound and thwack, but restraint and simplicity (especially harmonic simplicity) pack a bigger punch. Whether this indicates a new chapter in Turnage’s output remains to be seen, but such a radical shift in direction is impressive on a number of levels. The performances, both directed by Daniel Harding, are outstanding, very richly detailed, and Speranza benefits from being a recording of the world première, occasions that always carry an extra frisson of excitement. 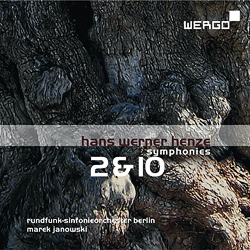 Maybe not quite at the opposite end of the accessibility spectrum, but certainly a considerable distance along it, are Symphonies 2 and 10 by Hans Werner Henze, explored together on a new disc out on Wergo. Featuring the Rundfunk-Sinfonieorchester Berlin conducted by Marek Janowksi (who turned 75 a couple of months back), both symphonies present a serious challenge to one’s comprehension of the notions of both structure and development. The Second Symphony abounds in lush periods of quietude, soft back-and-forths between brass and woodwind, strings moving slowly in a dark, mysterious space (echoes here of Shostakovich’s more searching slow movements), but Henze’s tendency is to stir things up fiercely and stomp on them; such eruptions, some of them truly massive, are often unexpected, and in conjunction with the work’s amorphous formal design engender a disorientation only somewhat mitigated by the exhilaration of the music’s sonic force. Symphony No. 10 is more structurally coherent, within which Henze presents a superabundance of detail; indeed, in the first movement there are times when it’s hard to know where to focus the ears. There’s also, if anything, even greater immensity on display on this piece, but Henze demonstrably punctures these vast inflations with more readiness than in the earlier work. The closing movement exhibits some of the same kind of tough obfuscation (evasion?) of perceived progression, but the inner movements are fascinating, involving a slow movement with multiple discrete strands that slides into unsettling repetition, and curious episodic dance-like music in a constant state of transformation, becoming overrun with percussion. 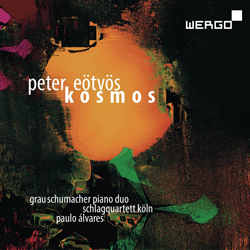 Wergo’s new CD featuring Peter Eötvös‘ music reduces the number of performers to no more than six, yet this is often far from apparent. The Sonata per Sei, for two pianos, three percussionists and sampler keyboard, establishes an interesting interrelationship, the keyboard becoming a kind of bridge between piano and percussion. The work’s five movements sound like a cross between Ligeti and Frank Zappa, the pianos leading the ensemble through a sequence of playful hockets and Shepard tone-esque scales, hopping around frantically between melodic contours and raw texture. Both percussion and keyboard largely act to resonate and radiate the piano material, but occasionally Eötvös promotes them to the foreground, bringing an altogether more dreamlike (even dreamy) element in contrast to the pell mell clangour and thump that is the pianos’ (admittedly thrilling) default position. The two-piano work Kosmos doesn’t really live up the composer’s astronomically-inspired intentions; the not-quite-synchronicity between the players is very effective, the imaginative scope is broad and immersive, but it’s very much more easy to hear the work as a steady entropic progression towards heat death than the composer’s seemingly desired implication of an imminent big crunch. The most exhilarating work on the disc is Psalm 151 for 4 percussionists, composed in memory of Frank Zappa. Eötvös titled the work due to an erroneous belief that “the 150 Psalms in the Bible do not deal with protest” (in fact, a great many of them do, intermingled with lament); hence being numbered 151. That’s beside the point, though; Eötvös’ Psalm is steeped in solemnity and ritual, moving sectionally between tubular bells, two plate bells, two gongs and a large drum. The sense of formalised indignance and grief is overwhelmingly palpable throughout, made all the more personal through some remarkable choices of articulation, including bell overtones and some amazing effects from rubbing and stroking the drum head. Percussion has become so ubiquitous in new music that it’s a real delight to hear the medium used with such revelatory originality; Schlagquartett Köln’s rendition of the work is masterly. 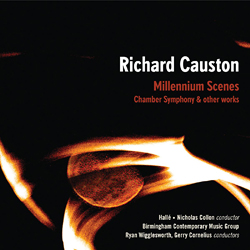 NMC have recently brought out the latest in their splendid Debut Discs series, this time highlighting the music of Richard Causton. The fact that Causton’s work has been widely heard in concerts for around 20 years (my own first contact was back in 1996) makes the idea of a ‘debut’ disc seem implausible, yet his output is woefully under-represented on disc, making this a significant release much to be celebrated. The five works included are both lengthy and weighty, ranging from 10 players to a large orchestra. The recent Chamber Symphony is an engaging take on the perils of mechanistic mass production, in which fanfares and bouts of lyricism are militated against by ominous materials that gradually gain momentum. As Kingfishers Catch Fire puts the ensemble through a rapid-fire series of episodes that are both playful and combative, culminating in a gorgeous, otherworldly coda. Causton’s ear for the ethereal is genuinely magnificent; it causes Kingfishers to transcend its mortal combat and enables The Persistance of Memory (an early work, composed in 1995) to manifest vividly the uncanny effects brought on by a nasty bout of delirium. The Notturno dives into a parallel world of blurred nocturnal movement—slow, spacious, consonant, heady—but proves frustrating in its atmosphere-breaking final section. Towering over these works, though, is the large orchestral Millennium Scenes from 1999, Causton going against type and tapping into a vein heavy-laden with despondency and violence. The brute force unleashed in the work’s twin movements are as breathtaking as they are intimidating (all the more so considering the magical demonstrations of delicacy heard elsewhere): raucous bellows of emotion, sometimes shaped by tribalistic rhythms, sometimes fusing into monumental slabs of sound, invoking a hail of hammer blows. Causton invites the idea of relief as the work progresses, rendering the texture vaporous, but intrusions from earlier make this a false hope, with even the work’s ebbing sounds rudely crowned with a car horn. It’s extremely disconcerting to hear Causton in this frame of mind, yet the results are extraordinary.

[…] an interesting small addendum to be made to my article a couple of days ago, reviewing recent CDs. i commented that LSO Live has released the world première performance of Mark-Anthony […]

[…] recently examined the more interesting soloistic & orchestral new releases, it’s time to give an overview of the best of the rest, music that doesn’t […]

[…] his compositional language regularly resorts. In this respect, the title work is unforgettable—in my review i noted how the “brute force unleashed in [its] twin movements are as breathtaking as they […]