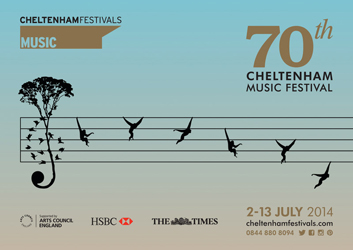 Festivals come and festivals go, and Cheltenham—just like Bristol New Music a few months back—imaginatively opted to end not with a bang but on a high. It came courtesy of Norway, with the immaculate combination of Trio Mediaeval, three female singers with voices lifted straight out of the Middle Ages, and one of the most versatile trumpeters of our age, Arve Henriksen. The fruits of their collaboration, heard within the majestic space that is Cheltenham College’s Chapel, were as breathtaking as they were unexpected. For a little over an hour, they together weaved a tapestry of sound that integrated early music from throughout Europe, both sacred and secular, with avant garde and experimental elements, including electronics. What this was not—and the lengthy, articulate programme note from the Trio went to some lengths to elaborate this—was an attempt to present early music with an affected air of ‘authenticity’, but instead to embrace the unknowability of such ancient music and reinvent it at each performance. As such, it becomes something simultaneously ancient and modern:

The presentation of sacred mediaeval music around the world today differs extensively from its original context: performers bring music from around a thousand years ago alive in the present – an act of simultaneous preservation and re-creation. We completely re-contextualise the music: none of it was written to be part of a concert programme or a recording, not was it intended to be performed to an audience (as we understand the term today). […] There is a lot of guesswork and individual intuition in mediaeval music performances. The members of Trio Mediaeval feel that performing mediaeval music today gives us the freedom to let our imagination and ideas flow, as though we are creating contemporary music. It is impossible to know what this music would have sounded like in the Middle Ages, and therefore impossible to re-create a mediaeval vocal sound. We have chosen to use the lack of original information to inform our performance in the present – something that gives us the opportunity to be creative in our music making. (from the programme note) 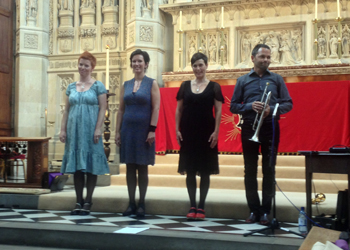 i called the concert a tapestry, and that was precisely how it came across: traversing through a sequence of relatively short pieces, each totally different from its neighbours yet unquestionably a recognisable part of the whole. The songs required minimal accompaniment—some chime bars or a violin sufficed, each used extremely sparingly—and more often than not the Trio was unaccompanied. No texts were provided, but for once this felt entirely appropriate, as we could gauge the nature of the piece immediately from the manner of its performance. Folk and part-songs had a distinctive twinkle in their eye (as did Trio Mediaeval) and a lilting spring in their step, both verses and choruses continually being re-organised and -harmonised; motets felt more measured, occasionally coloured with some exquisitely oblique false relations. Chants (to my ear more Ambrosian than Gregorian) were significantly longer, and they captured entirely what so often gets missed in the appreciation of chant, the way the undulating melodic contour becomes a kind of narrative mirror for the words; the lack of a text here only made one focus entirely on that contour, drawing us into the complex story etched on its surface. Henriksen’s role varied; sometimes he sang, the group becoming a finely-balanced vocal quartet; other times he used the trumpet to become a fourth ‘voice’. Henriksen’s unique performance technique has always sounded uncannily similar to the human voice, and there were times he blended so completely that he was indistinguishable from the Trio. Elsewhere he improvised, on his trumpet, on a piccolo trumpet, on a clariphone, again with minimal accompaniment from an accordion or electronics, both very restrained, allowing Henriksen’s arching melodies to soar up to the vaulted ceiling.

It was, i have to say, intensely moving. Whether one’s proclivities and instincts are sacred or secular (or both), the music resonating in our ears made sense and spoke true. Indeed, hearing this concert in the wake of such consciously religious music earlier in the week left one wondering whether this, in fact, was the more genuine act of deeply-felt expression. Certainly the encore, an almost impossibly soft song alternating between voices and trumpet, was heart-stoppingly beautiful, and i can’t imagine i was the only one with tears on my face. For all its mysteries and methods, music of every age should, hopefully, touch listeners very directly, and the overwhelming response from the audience—pin-droppable silences while they performed, eruptions of applause after—made it clear just how potent and timelessly communicative mediaeval music continues to be.