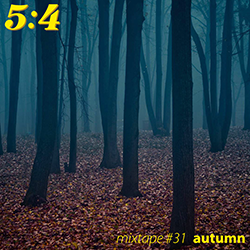 For the latest 5:4 mixtape, i’ve opted to explore music associated in some way with this time of year. Autumn is arguably the most poignant of the seasons, the ostentatious eruption of its gorgeous colours militated against by the pointed melancholy of its inevitable transition into the wastelands of winter. My infinitely greater namesake, the poet E. E. Cummings, often indignantly pitted the season against his beloved, despite its beauty:

cruelly,love
walk the autumn long;
the last flower in whose hair,
thy lips are cold with songs

for which is first to wither, to pass?
shallowness of sunlight
falls and,cruelly,
across the grass
Comes the
moon

Composers are no less affected by autumn, and the choices in this mixtape testify to the conflict it brings about. Something of its sheer loveliness can be heard in the still profundity of Celer, Brian Eno, Gunner Møller Pedersen (whose massive 6-hour A Sound Year is well worth exploring) and Darren Harper, as well as in the transfixed ecstatic overload of Belong. Autumn’s raw physicality finds expression through the exploration of field recordings in tracks by Manrico Montero, Scott Taylor, Steve Roden & Machinefabriek and Ennio Mazzon. The flipside of this can be heard in heartfelt ballads; i’ve included four hugely contrasting incarnations of the finest of them all, Joseph Kosma’s Autumn Leaves, by Mantovani, Emmy Rossum, Coldcut and The Flashbulb. Its melancholic lyricism is taken to the apogee of expressive force by Richard Strauss, saturated with an escapist surge by Andre Kostelanetz, and given a playful tilt by both Kalevi Aho (whose theremin sounds strikingly like a human voice) and Max Richter‘s subtle reworking of Vivaldi, rhythms made irregular and harmonies enriched with more romantic flavours. The seriousness of the season receives fittingly wistful treatment from Tor Lundvall and Wendy Carlos, while Takemitsu‘s engagement is almost shockingly aggressive. The inclusion of tracks by EL Heath and Kenneth Kirschner are (im)pertinent red herrings, both simply composed during this time of year but, wittingly or otherwise, fitting well into its general tone.

A little over two hours of autumnal bliss and brooding; here’s the tracklisting in full: