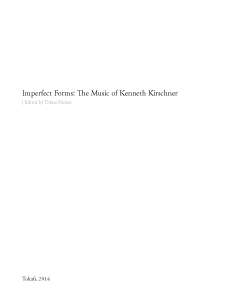 On various occasions in the past, i’ve written about the music of American experimental composer Kenneth Kirschner. His work, all electronic and available free via his website, is endlessly fascinating, exploring a wide and unexpected variety of sonic shapes and timbres within formal contexts that take a radical approach (informed in part by the music of Feldman) to notions of narrative and development, with a tendency toward indeterminate—or at least, perceptually indeterminate—structures. Kirschner’s considerable output deserves much greater exposure and engagement than it has hitherto received, which makes yesterday’s release of Imperfect Forms: The Music of Kenneth Kirschner, a multimedia project celebrating and exploring his music, extremely welcome.

The project is published by Tokafi, and in keeping with Kirschner’s own approach to releasing his work, the entire kit and kaboodle are available free of charge via the Tokafi bandcamp page (of course, feel free to pay something if you can).