It’s that time once again, so as the year starts to sputters to its close, here’s my annual round-up of the best encounters i’ve had with 2014’s crop of new releases, beginning with the top 10 EPs.

Feel the solemnity; Norwegian duo Erik Skodvin and Otto Totland’s latest missive comes drenched in autumnal melancholy, an aimless piano picking its way through the penumbral space that is ‘Follow Still’ while the ground shifts beneath. Ominous sounds lurk at the periphery, dispelled in second track ‘Oblivion’, a beautiful essay in the darker forms of ecstasy. [Boomkat]

Having toyed with both ambient- and beat-based materials in the last few years, Robert Henke’s new release (his first in two years) brings them together. Bookend tracks ‘Xor’ and ‘Ethernet’ are pretty delicious slivers of hectic electronica, held together by a cluster of clanging rhythmic loops, but it’s central track ‘Inwards’ that, despite being the shortest on the EP, goes deeper, a timely reminder of just how fresh ambient music can sound in Henke’s hands. [Hard Wax | Boomkat]

Whereas dance-oriented music has been the focus on their previous EPs (The Red Room and Cowboys, both released in 2012), Dwntwn have placed much greater emphasis on song on the five tracks of this self-titled EP. ‘Til Tomorrow’ tops off its exquisite melodic writing with a gradual shift from delicacy to full-on impassioned outburst, while ‘Heroine’ folds the mildest of country touches into a heart-felt ballad packing considerable pain beneath its grace. [iTunes]

“In this project the main question I’ve tried to answer is ‘can these robots play music that is emotionally engaging?’” The fact that much of this EP sounds essentially identical to Tom Jenkinson’s recent work, plus the ‘uncanny valley’ effect that such razor-sharp accuracy engenders (redolent of Zappa’s synclavier work) perhaps renders his question moot. Yet working with a trio of Japanese robot musicians has clearly unleashed a distinctive burst of imagination; ‘Dissolver’—a fiery quasi-extemporised workout—is arguably the finest demonstration of this unique collaboration, but ‘World Three’, involving the unlikely presence of a pipe organ, brings an oft-absent pensivity to Squarepusher’s output. [Bleep]

Monty Adkins’ work continues to plough increasingly deep furrows into material at the meeting point of ambient and experimental electronics. The results are uniformly beautiful, and this short piece is no exception, slow shifting chords and clouds matched by episodes of more blistered music, positioned with Adkins’ typically unerring skill so as to draw out a potent sense of inner drama. [Crónica – free download]

5 | Darren McClure – The World Is Made Of Words

Born in Northern Ireland, today based in Japan, Darren McClure’s latest release is a gorgeous and impressively focused slab of electronics. The work’s drones seem immovable yet malleable, McClure often pushing and shaping them in such a way so as to obscure both their pitch and timbral qualities; a delicate garnishing of almost-identifiable noises on the surface keeps the music and one’s listening experience sharp. [Yugen – free download]

2014 has been a good year for British group Duologue, and this EP (reviewed back in June) pointed the way towards what was to come later. A canny knack for playing with and rethinking conventional elements of pop and rock are a major part of what makes their music so successful; song structures go off on side tangents, harmony is lightly crumpled and kinked, while Tim Digby-Bell’s unique vocals blend vulnerable purity with subtle hints of contention. Third track ‘Traps’ is easily one of my favourite songs of the year. [iTunes]

The opening soundscapes Reuter creates for his concerts are sublime examples of melody soaring over successive waves of complex consonance, improvisatory in nature but with a determined sense of direction. These six, taken from Reuter’s 2014 tour of New Zealand and Australia, are a diverse bunch, moving freely between pitch and noise to create intense bursts of post-ambient glory. [Bandcamp]

Too often, and probably for too long, Nordvargr’s emphasis has been on the more blank tropes of dark ambience (with mixed results), but in this superb 26-minute release he demonstrates an utterly different creative position. Gone are the impossible deep notes and infinite resonate spaces, replaced with hard-edged, enclosed portions of roiling, scalding electronic sounds and textures, highly detailed and made all the more fearsome by a marked lightness of touch displayed elsewhere. [Bandcamp – free download] 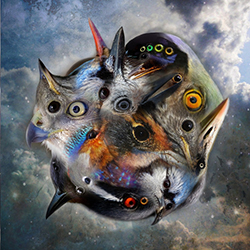 Another fantastical journey into the strangest of sounds and juxtapositions, Neognathae Portentosus stands out from some of Matt Waldron’s longer-form pieces in having a more overt sense of narrative (albeit a highly allusive one), which brings a myriad extra frissons of excitement to its weird sonic proceedings. The irr. app. (ext.) project has generally walked an absurdist path through the world of acousmatic music, but here the relationship between original sources and their heavily processed, finished forms is especially convoluted; from one perspective all appears organic and real; from another, everything—even the most ephemeral sonic event—has been put through the mill (and the wringer).

Waldron’s fondness for pseudo-animal noises renders the piece seemingly inhabited by a plethora of unimaginable creatures (the artwork perhaps hints at some of them), but this is only part of which makes Neognathae Portentosus feel like a hellish kind of documentary recording. i mentioned narrative, and it’s this that turns the piece into a kind of sonic poem, vividly pulling us inexorably into the bowels of a diabolical jungle in the blackest back of beyond. [Bandcamp]

[…] on the promise of their Memex EP (see yesterday’s Best of the Year list), Duologue have here boldly taken their songs into very new territory. Scratchy rhythms and beats […]

[…] similar to the EP of tracks recorded in Australasia (included in my Best EPs of the Year list), this extended set originating in European concerts goes very much further and deeper. […]

[…] by Henrik N Björkk (aka Nordvargr). Like Wermland Atonal 1, one of my favourite EPs of 2014, this is a total contrast to Nordvargr’s blacker-than-black ambient. Here, raw electronics […]