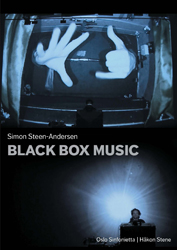 My round-up of the most interesting new releases this time features three objects: a film, a box and a book, each desirable for very different reasons. The film, available from Dacapo Records, is a much-to-be-celebrated DVD release of Simon Steen-Andersen‘s bewilderingly marvellous work Black Box Music. The memory of my first encounter with the piece at HCMF 2012 is still very vivid, and that’s entirely due to the skilful blend of wit and virtuosity that is encapsulated both within and without the box. It’s true that Steen-Andersen’s work doesn’t always hit home as successfully as this, but that criticism seems almost churlish when confronted by the frankly amazing breadth of his imagination. In Black Box Music, a solo performer directs and interacts with two spatially separated groups of instrumentalists; these directions and interactions come via a camera feed from inside the titular box, filming the soloist’s hands. Cast in three movements, it progresses from a kind of ‘warming up’ to a dazzling display of apparent cause and effect, the soloist’s gestures seemingly eliciting certain types of material and behaviour from the players; but there are times when this becomes subverted, suggesting the relationship is rather more complex than seemed at first. When the instruments are aligned with the box (which is most of the time), the tightness and speed of the back-and-forth is astonishing to the point of becoming rather uncanny, and while the work’s denouement is perhaps too ostentatious for its own good, watching the black box gradually turn into a miniature party (replete with fans, streamers and a balloon) is highly amusing. The DVD also features two performances of Steen-Andersen’s audio-visual work Run Time Error, an energetic, site-specific piece rendered into split-screen video demonstrating that, despite occasional appearances to the contrary, the composer’s interest is emphatically on sound. 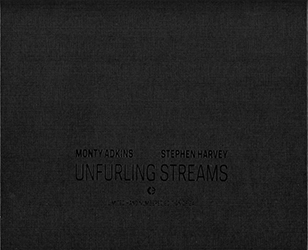 From one black box to another: large, black and—unless you tilt it to the light—anonymous, within which is contained Unfurling Streams, a new sound/image work created by Monty Adkins and Stephen Harvey. The two collaborated on last year’s Rift Patterns, and this new work displays the same close attention to the intricate, intimate marriage of sight and sound. i’ve written about Adkins’ music on a number of occasions, but i’ve never really addressed what i think is one of the most interesting aspects about it. Since 2008, in certain movements of the thrilling [60]Project, and certainly from his album Five Panels released the following year, Adkins’ music has gone through a fascinating process of maturation, becoming slow, spacious and exceptionally beautiful. And this is very dangerous from an aesthetic perspective, as it’s an approach that invites comparisons to be drawn with contemporary ambient music, a quite different field and one that—with a few notable exceptions—has in recent years become ever more entrenched in displays of banal ‘nongenuity’. In any case, to describe Monty Adkins’ music as ‘ambient’ would be to fixate solely on its surface and ignore the legacy, context, intentions and depths of action and content that lie beneath its undeniably attractive veneer. Adkins is doing a whole lot more. In Unfurling Streams, the point of inspiration (for both images and music) is the final two lines of poem no. 10 from E. E. Cummings’ 1958 collection 95 Poems: “For whatever we lose(like a you or a me) / it’s always ourselves we find in the sea”. Far from being the cue for sounds either directly recorded from or alluding to the machinations of waves, tides and the like, Adkins instead opts for a more abstract engagement, creating a sextet of canvasses that are characterised by a sense of fluidity, or buoyancy. There’s no idle float or drift here, materials are purposefully moved so as to produce particular moments of coalescence, or to underpin a moment of structural importance, or to reinforce something hitherto only implied. Harmony is a prominent concern throughout Unfurling Streams; penetrating deep bass notes tonally recolour everything above them, and there are even instances that one might call ‘cadential’. The considerable amounts of drama that ensue (Adkins’ sense of timing is just immaculate) easily finds its equal in the remarkable collection of 12 images created by Stephen Harvey (who, it should be stressed, is also a composer). Although more aquatically referential, they, too, are sufficiently abstracted that in most cases they go way beyond mere representation; Harvey’s concern is “to investigate detail and particularity and make it the essence of the work”. The images are a triumph in which familiarity is made new, even (at first) alien: complex refractive latticework, swirling clouds of impossible perspective, pools of something molten encrusted with jewels, these are all among the delights to be found in Harvey’s gorgeous, immersive images (glimpses of some of which can be seen here and here). Released in an extremely limited edition of 24 (as well as a standard CD-only edition of 200), at time of writing just five of these box sets remain available, so in order to engage fully with Unfurling Streams, you’ll need to make haste to the Crónica Bandcamp site, where the album can also be streamed. 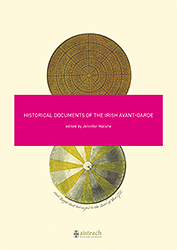 A book bearing the title Historical Documents of the Irish Avant-Garde perhaps indicates a worthy but somewhat dry academic tome. Yet the words “edited by Jennifer Walshe” connote something rather different, and indeed this is very much more than just 152 pages exploring various luminaries and collectives who contributed to Ireland’s avant-garde legacy. Or, depending on your perspective, very much less; Walshe’s preface opens with a confessional:

… all of the composers and artists are fictional. The Aisteach Foundation and the Historical Documents of the Irish Avant-Garde are a communal thought experiment, a revisionist exercise in “what if?”, a huge effort by many people to create an alternative history of avant-garde music in Ireland, to write our ancestors into being and shape their stories with care.”

Certain precedents leap to mind: Dave Stewart’s counterfeit ’70s band Platinum Weird, and especially the period in The Hafler Trio’s history (the early 1990s) involving a putative third member of the group, the fictional scientist Dr. Edward Moolenbeek (a track on their 1992 album “BANG!” – an open letter even includes an interview with “Moolenbeek”) alongside a made-up institute, Robol, and a further collaborative scientist, the imaginary Dr. Robert Spridgeon (deceased). Those examples, though, were deliberate hoaxes and Walshe’s project is very different in that it demonstrably does not set out to deceive. And although it may seem ostensibly counterproductive, it’s vital to the nature of the present work that the rug is pulled at the outset in this way. What follows is an incredibly engrossing document that goes a long way to defy its own inauthenticity, and provoke a great deal of thought regarding the nature and role of the avant-garde and its practitioners. It’s also, and i don’t think this is unimportant, highly entertaining. Walshe, after all, has for many years expressed herself creatively through a number of fictional guises, encapsulated in the Grúpat collective (which, for a time, came closer to the notion of a hoax), and in this respect Historical Documents can be seen as a logical progression. Furthermore the project has clearly been in Walshe’s mind for some time; her electroacoustic vocal work bearing the same title as the book was composed in 2012. It isn’t by her alone, however; a number of other writers and musicians have collaborated, creating both the articles as well as more than two hours of ‘archive’ musical material.

A recurring theme in the book, expressed surprisingly polemically, is the off-hand way with which the avant-garde tends to be summarily dismissed by society. Pianist and teacher Theresa Flynn finds her ambitions thwarted “in the face of a craven musical and political establishment”, philanthropist Chancey Briggs suffers “neglect almost inevitable in a country where rigid puritanical values […] remained very much in place and even enshrined in law…”, while the wonderfully-named Keening Women’s Alliance “had little oxygen to breathe in Ireland, which remained culturally and socially both a broken and a somewhat isolated country at that time.” Strong words, and in these and other instances there’s a potent sense of righteous anger lurking beneath the otherwise celebratory text, which in turn invites consideration for how the avant-garde is regarded and marginalised today. More positively, though, the book captures something of the sheer exhilaration, for both artists and audiences alike, that surrounds so much avant-garde music-making, which only makes the accompanying musical examples so tantalising, offering all-too-brief insights into this vivid imaginary world. It is, at times, laugh out loud funny: the “all-male silent performance of Benjamin Britten’s Peter Grimes” that took place “in the foyer of Cork Opera House in 1956”; the grumblings that Part 4 of Jean-Michel Jarre’s Oxygène was pinched from a recorder melody by Theresa Flynn (the accompanying audio track is hilarious); and Róisín Madigan O’Reilly’s broadcasting of vowels into the atmosphere (“voweling the heaviside”) the effect of which may have ended up influencing James Joyce and T. S. Eliot (and, thereby, Andrew Lloyd-Webber). This last example illustrates another theme running through the book, that of curatorial enthusiasm taking unreasonable leaps in order to make or bolster a case; many of the articles refer to a scant quantity of supporting material, which only undermines—and sometimes makes entirely ludicrous—the often highfalutin praise heaped upon these figures, a practice hardly unknown within the real world of contemporary music. To return to a more serious point, a poignant undercurrent, implied more than directly stated, is the relationship between madness and genius. It doesn’t negate their artistic endeavours, of course, but more than one of these characters appear to be suffering from some form of mental illness, which adds a sober counterpoint to these acts of pseudo-commemoration. The book itself acts as a parallel to this, blurring entirely the distinction between reality and fiction: numerous references to people, places and organisations are entirely accurate, and at least one of the featured artists, Rev. Joseph Garvan Digges, was a real person, with invented elements here grafted on; uilleann piper Ultan O’Farrell, on the other hand, finds his only corroboration in this suspiciously singular, rather startling bit of text. It’s a discombobulating, provocative and joyous experience to read, listen to, research and ponder upon Historical Documents of the Irish Avant-Garde, which encapsulates the essence of Jennifer Walshe’s music, full of depth and mischief. The entire book can be read online via the Aisteach website, which includes all the musical examples; a print-on-demand book is also available here, and a higher-resolution compilation of some of the music can be had via iTunes.

What an extraordinary book of Walshe’s that sounds. I love the sound of the playfulness of that kind of near-history, which doesn’t stop Walshe from making important points. I very much look forward to reading the printed version (books and computers don’t go together, for these eyes).

[…] student, Stephen Harvey, the latter disc has already attracted attention on major new music blogs, 5against4 describing the album as ‘exceptionally beautiful’. To develop both these releases and an ongoing series of outputs, […]

[…] which encapsulates the essence of Jennifer Walshe’s music, full of depth and mischief.” (reviewed in April) […]

[…] these are all among the delights to be found in Harvey’s gorgeous, immersive images”. (reviewed in April) […]