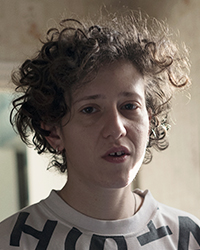 Having referred to the cinematic qualities of some recent premières, it’s interesting now to turn to a composer whose music does not sound conventionally cinematic, yet who has become well-known in recent times for a film score. Jonathan Glazer’s 2013 film Under the Skin is a remarkable piece of work, simultaneously alienating (literally) and human, and emotionally-speaking both aloof and raw. Mica Levi‘s score was justifiably lauded for the way it not only integrated so seamlessly into Glazer’s unique world, but gave that world a particular tone of voice. Including it in my Best Albums of 2014 list, i commented how “[n]either sound nor structure are forced but instead play out in their own time frame, switching between the aural equivalents of vacant stares and creeping insect-like tremors and twitches. Music that embraces a very new notion of beauty.” The same can be said of her new work Greezy, premièred a couple of months ago in the first of two ‘Spectrum Of Sound’ concerts given by the London Sinfonietta.

Greezy could, in fact, almost be described as an outtake from Under the Skin, as it takes place with precisely the same kind of blank austerity, marshalled by a pulse that feels as though each new beat only comes with effort. This is mirrored in the strings, whose material feels littered with aches and pains. How this squares with the work’s inspiration is not entirely clear: ‘greezy’, according to Levi, is “a street term used to describe someone who has to do bad work, dirty work […] to call someone ‘greezy’ could be a term of respect but it also shows that you’re pretty crazy, you’ll do something without worrying about the consequences”. Levi’s music is about as far from crazy as one could imagine, though, built upon a sombre procession of low triads (timbrally akin to a consort of viols), alternating between minor and major. The tonalities these triads project are constantly undermined by sliding deep bass notes and melodic lines that slither all over them, as though played on a turntable with a wonky motor. Through these means, Levi again makes music that’s at once familiar yet alien, a beautiful but queasy dirge that’s surprisingly moving. On two occasions, Levi challenges whether the upper lines and triads are fundamentally connected, but ultimately they prove to be, resolving into a blurry kind of focus. Towards the end, the laboured pulse almost sounds like it’s going to collapse when Levi massively thickens the triads to the point that the piece seems to be wading through treacle. Becoming fraught, and surrounded by brief, seemingly false reprises, the music violently splinters into twin extremes of register, both sounding so taut that they can barely move.

It doesn’t so much sound crazy as quietly deranged, yet its slurring strangeness only makes Greezy all the more hypnotic. Levi seems to be a composer who, despite challenging so many conventions, has a knack of making music that irresistibly envelops, pulling one in, and rather unsettlingly stays with you long after it’s finished. The world première of Greezy was given by the London Sinfonietta conducted by André de Ridder.