If there’s one thing that pretty much all of the new works at the Proms tend to suffer a lack of, it’s humility; that’s not to suggest this is down to their respective composers (in most cases), but the act of presenting a première usually finds itself festooned in generous quantities of hype and hullabaloo, which only occasionally turn out to be justified. So Singaporean composer Bertram Wee‘s new work Dithryambs, premièred by Evelyn Glennie last Monday at Cadogan Hall, therefore came as a welcome and very refreshing exception to this razzmatazztic norm. Composed for the relatively unfamiliar aluphone—a clattersome instrument made (as the name implies) from aluminium, resembling B-movie flying saucers, arranged like a set of crotales and sounding like a cross between bells and car hubcaps—Dithyrambs is essentially a study, seeking to tease out and have fun with a variety of facets yet without overstaying its welcome. 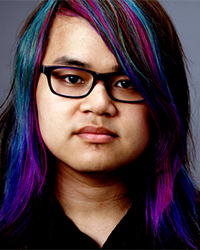 A sense of play permeates every moment of Dithyrambs (a slightly exaggerated title, considering the work’s modest scale, though that’s perhaps a churlish observation), beginning with rapid trills and tremolandi from which Wee captures certain pitches and extrudes them through extended resonance. This develops into a more generalised interplay between dynamic extremes, the softer passages bringing to mind Tibetan singing bowls, tubular bells and even pyrex dishes (the aluphone truly is a member of the ‘kitchen department’). There are some lovely occasions when pitches hover and sustain with varying degrees of purity, but Wee’s explorations ultimately move towards a more polarised division, alternating loud phrases with pitchless soft clatter. Dithyrambs‘ subsequent end on the one hand feels too soon—over before it’s really begun—yet one wonders to what extent Wee may have exhausted the instrument’s solo potential (and, indeed, the audience’s preparedness to listen to it alone). Perhaps that ambivalence indicates the piece strikes a good balance; either way, Dithyrambs is an enjoyable bit of tomfoolery, providing a succinct overview of the aluphone’s clangorous beauty and subtlety.

you got it spot on.
for me it was a faulty carillon. Cannot think I would want to here the instrument again, prefer the bathos of carillons in need of maintanance struggling with trite music