In 2004, Michael Finnissy was invited to contribute to an edition of the journal The Liberal, specifically an issue devoted to the subject of outer space. Finnissy chose to adopt the journal’s title and apply the idea to perfomers responding “liberally to the score”, which comprised two pages of graphic notation, designed “to roughly convey an impression of Saturn’s rings”. The two pages are independent, performed simultaneously, one intended for single-stave instruments, the other for keyboards; the members of the ensemble, which is unspecified, make their own way through this material, guided both by the individual notes and phrases themselves as well as by the looming concentric rings that dominate the pages (see below). 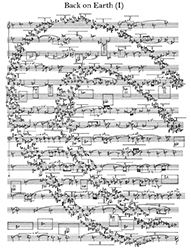 No performance of a work containing such a variety of freedoms can lay claim to be definitive, either in terms of timbral specifics or indeed structural character. For the world première, given by Plus-Minus at their 60th birthday weekend for Finnissy in September 2006, the resultant music is characterised by a kind of two-tier layering (which could alternately be heard as a sense of near/far perspective). What at first seems like tentativity in the instruments over time clarifies into a somewhat aloof nature of action, sounds being allowed to hover and shiver in place, barely moving, occasionally changing into small clusterbombs of dense activity. Considering Finnissy’s inspiration and the specific subject matter of the journal for which it was written—and despite the fact that the music, according to Finnissy’s programme note, “is not intended to suggest anything interstellar, filmic, or pseudo scientific”—it’s nonetheless tempting to hear the instruments’s material as at the very least floating objects in space; some sounds tumble, others gleam from a single point, while still others wink out of existence the moment they’re born. Soloistic outbursts from the piano threaten to make things gel into a familiar ‘piano and ensemble’-type arrangement, but it holds back sufficiently that what projects instead is a simple constrast in density, foregrounded against the rest of the ensemble that has by now become more vaporous.

To an extent it’s a work without beginning or end, articulating the sort of short-term ostensible stasis that hints at astronomical organisation and longevity, offering a window into something inscrutable and quasi-arbitrary, a window that will reveal something entirely different every time it’s opened. And it is only a window and not an open-ended voyage; the work’s title references a recurring refrain of Finnissy’s father in response to the composer’s equally recurring reveries of imagination: “Michael, please come back to Earth.”

Hello Simon, the FLAC download button doesn’t seem to be working. Thanks! Tim