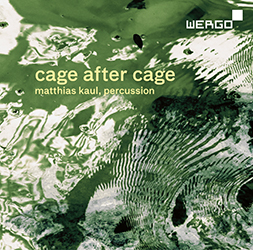 Three recent releases on Wergo have stayed true to the German label’s tendency to go above and beyond one’s expectations. It’s hard to say which is more remarkable, John Cage or percussionist Matthias Kaul, on Cage After Cage, an album featuring renditions of six of the composer’s works for percussion, dating from as far back as 1956 to as recent as 1990. In many respects, the collection as a whole can be heard as tapping (literally) into the very essence of what percussion is, namely the banging, scraping and rubbing of objects. The range of sounds and timbres captured here borders on the encyclopaedic, even in otherwise modest contexts, such as Kaul’s version of Composed Improvisation (1990) for solo snare drum. i’m not sure i actually heard anything approximating to a snare anywhere in the piece; instead, following a collection of friction noises with light ricochets, comes a high chord(!), perfectly in tune, spacially-separated hocketing impacts, and a descending Shepard tone-like sequence of strikes. In other words, sounds that defy one’s understanding of a snare drum, articulated and excited via an assortment of unconventional triggers (including, by the sound of things, an ebow). It’s a perfect overture to the rest of the disc, particularly Variations I (1958), in a version for the wondrous combination of steel drums and mbira, in which weird drum/voice hybrid sounds emerge somehow, with a beautiful, increasingly sparse duet at its epicentre, just about held together by the weakest of pulses. Child of Tree, from 1975, gets to the heart of what typifies all six of these performances: exploring and frequently directly superimposing opposites, chiefly between abstract, long, slow noises generated by friction and concrete, momentary, fast sounds produced by strikes, alongside a parallel examination of pitch and noise, with both a clarification and a blurring of the distinction between the two. The semi-improvisational nature of Cage’s instructions leads to a work like Inlets (1977)—the unique instruction for which reads, “for three players of water-filled conch shells and one conch-player using circular breathing and the sound of fire”—sounding almost entirely bereft of human involvement, the complexity of its three-part drippings plausibly the product of nature. However, in 1956 piece 27’10.554″ for a Percussionist, the opposite happens, its long span becoming arbitrary, any connection between events and actions seeming tenuous at best. There’s the makings of an essay in density and timbral interplay here, but too loosely and with far too much timbral novelty to be convincing. Notwithstanding this, Matthias Kaul’s performances throughout are a genuine marvel of imagination and dexterity, and once one abandons the doomed attempt to figure out how on earth he’s making some of these noises, Cage’s surreal soundworlds prove both engaging and highly entertaining. 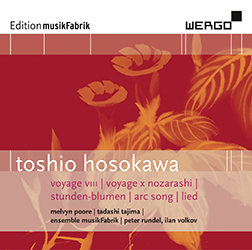 The music of Japanese composer Toshio Hosokawa is explored on a disc from Ensemble Musikfabrik. The five pieces come across almost like separate strands of the same overarching act of expression, which is not at all to suggest tautology, only to emphasise the general consistency in Hosokawa’s compositional approach. It’s perhaps best summarised as a kind of fragrant lyricism, infused deeply with the colouration of Messiaen and the heady spontaneity of compatriot Takemitsu. From a dramatic/narrative perspective, Hosokawa is somewhere in between; there are examples here where the sense of development is palpable, thought becoming concept becoming idea becoming action, both on the micro scale of a phrase as well as the macro level of an entire composition. Voyage VIII, composed in 2006, paints a rather magical portrait of a tuba as instigator in a garden of delights, laying down a literal fundamental through lengthy drones as well as soaring into ever higher regions of its register, all the time awakening the rest of the ensemble and inspiring them to embark on extensive lines and decorative shapes and gestures, given a glittering sheen through chiming metallic percussion. A similar back-and-forth between delicacy and forcefulness is found in Arc Song (1999) for oboe and harp, both instruments covering a lot of ground (in terms of material as well as range) in a short space of time, the microtonal melody of the former shaded and reinforced by the latter. Stunden-Blumen (2008), a homage to Messiaen using the same instruments as his Quatuor, moves from an exquisite, sustained and somewhat mournful meditation on a single note into vigorous, even aggressive counterpoint, and Lied (2007) for flute and piano is similar inasmuch as its over emotional demeanour is always borne by a cogent, reasoned argument. That sense of core focus slips in Voyage X – Nozarashi (2009), an undeniably pretty but impenetrable work for shakuhachi and ensemble, yet where the sum total of its highly active swells and ebbs is a kind of stasis, identity and/or purpose remote, ultimately leaving one searching its glistening surface for a way in. But it’s the exception in an otherwise compelling group of works, treated to superb performances from Ensemble Musikfabrik captured with stunning instrumental clarity. 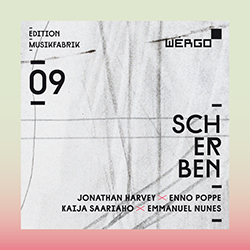 Also available from the ensemble is the latest—the ninth—in their ongoing compilation series Edition Musikfabrik, this time bringing together highly diverse works by Jonathan Harvey, Enno Poppe, Kaija Saariaho and Emmanuel Nunes. The last of them, Nunes’ Chessed I (2005) stands apart from the rest. While the programme note refers to the Kabbalah and numerology and phonetics, none of this can obviate the work’s relentlessly overbearing nature, where an apparent lack of importance in surface details (one assumes, as they can either not be grasped or the attempt feels thwarted due to their abundance) is not qualified by any significant interest or development in its timbral or behavioural character. There is, admittedly, some sense of shift from the multi-centric counterpoint at the start to a more unified attitude later, but all the same, Chessed I still sounds like a blazing conflagration that keeps blowing itself out only then to re-ignite. It’s hard not to feel disinterested or even numb in the face of such incessant undifferentiation. The starting point for Poppe’s Scherben (2008) seems risky: 121 separate fragments, averaging around five seconds in length, stitched together into a 13-minute whole. What’s surprising is the lack of anything approximating a ‘patchwork’ result; indeed, the way instruments seemingly team up—either through pitch unison or clear rhythmic alignment—is striking, as is the work’s coherent sense of progression through a sequence of states. From a place of idle chatter through varying kinds of lyricism and density, including a beautifully queasy timpani solo, the ensemble arrives at a united climax—interrupted by a florid riposte from the piano that leads to the most clangorous uproar. Poppe has created the equivalent of a concerto for ensemble; quite a bizarre one, but infectiously enjoyable. Harvey’s Sringāra Chaconne, also composed in 2008 (and recorded here for the first time) opts for structural simplicity, founded upon a deep, slow ground bass. The organic, tumbling activity above this is rich, radiant and often stunningly lovely, making for a marked contrast between surface and depth; at times the bass fades away, leaving these surface gestures seemingly floating weightless in a void. There is, though, a sense of complete unity, all instruments part of the same collective undertaking, one that finds room to dance later on, even adopting an air of ostentatious swagger, though a balance between turbulence and peace is always carefully maintained. At 27 minutes, Saariaho’s five-movement concerto of sorts for cello and chamber ensemble, Notes on Light (2010), also encompasses the broadest expressive range on the disc. The opulence that colours so much of her work is present here but in a much darker and more complex hue, like precious jewels wrapped in a veil. We’re thrown into it in medias res, plunged into a dark, dream-like place, where a conflicted cello—simultaneously hesitant and inquisitive—finds itself in the midst of a slow processional. Saariaho sends up fireworks resulting in some wonderfully wild tremulous glissandi, yet the music never becomes exactly playful, and its richness frequently feels pained, the soloist strained, its searching nature qualified by a weighty sense of heavy-laden labour. Fourth movement ‘Eclipse’ is delightfully literal, details swallowed up in terms of both register and clarity, concluding in a finale that in some ways returns to the tone of the opening, the processional replaced with a periodic ‘tolling’. In these moments, cello and ensemble are united, radiating as one, but they inevitably shift out of focus and alignment, the soloist continuing their unknowable quest through an ever-darkening landscape. Rendered with exquisite care by cellist Dirk Wietheger, it’s an immersive and utterly engrossing musical journey.

Simon, I hope you’ll forgive the complete change of subject, but, as I didn’t see you at Electric Spring back in February I’ll ask the question I was meaning to ask then: have you had a chance to listen to Mark Simpson’s The Immortal yet, and, if so, is it something that might feature on the blog in future (maybe as part of a series), or were you insufficiently taken with it?

Heading back a little more “on-topic”, at the aforementioned festival I caught a live performance of two movements from this, advance copies of which were on sale outside the venue – well worth investigating, given that I know you’ve enjoyed Adkins’s stuff in the past.

Chris, i was sorry not to be at Electric Spring – i got my diary a little mixed-up and in the end it really wasn’t a good time for me to get away (in general, finding time to write 5:4 isn’t easy at the moment), so that was a shame. i’m sure the festival was fascinating. Regarding Monty’s new album, Empreintes Digitales emailed a few days ago to say a copy was on its way to me, so i’ll be reviewing that in due course; really looking forward to hearing it.

i haven’t listened to The Immortal yet, but it’s very high on my To Do list.