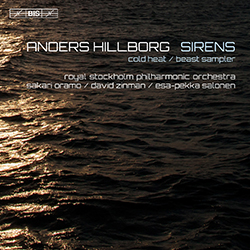 Continuing with Scandinavian new releases, a new disc from Bis featuring four works by Anders Hillborg is a real treat. It’s a generalisation, of course, but the focus of Hillborg’s music tends to be on the surface, and this understandably polarises listeners. Usually, the successes of this approach come out on top, and it’s therefore a genuine surprise to hear the main work on the disc, Sirens, not just falling short, but entirely failing. Using a text drawn from Homer, Hillborg’s setting utilises two soprano soloists, mixed choir and orchestra, and you’d be forgiven through the opening minutes for thinking that the most remarkable mise-en-scène was being established. It is unquestionably striking, but once the choir has entered, and a few minutes later the soloists, it soon becomes clear that nothing is being set up, we’re there already—were there, in fact, at the very start. In a way that directly parallels John Tavener, Hillborg is seeking a 33-minute orgasmic wave, but despite moments of utter beauty, the piece is simply so caught up in the attempt to relay its never-ending ecstatic allure that it becomes overwhelmingly cloying and dumbfounded. The harmonic proximity to the (dis-)likes of Eric Whitacre don’t exactly help. But it’s the odd one out on a disc that is otherwise nothing but a delight. Beast Sampler and Cold Heat—both works featured before on 5:4 following their appearances at the Proms—sound better than ever in these new recordings by the Royal Stockholm Philharmonic Orchestra. The former is a masterclass in turning the orchestra into a veritable menagerie of animalistic behaviours, all the while tapping into full-blooded levels of elementalism and searing glory.  The latter is one of Hillborg’s trademarks, a tone poem making manifest contradictory concepts rooted in objects and physical properties. In Cold Heat, the sense of pace (and pulse) are rather wonderfully confused, slow chorale-like progressions amidst rapid torrential downpours. The harmonic language, though broadly consonant and with distinct cadential moments, is always somewhat askew. Temperamentally, the piece inclines towards mayhem, conveyed with a Tippett-like contrapuntal effervescence, climaxing in an exhilarating tribalistic high (more genuinely ecstatic than Thomas Adès ‘Ecstasio’, which it brings to mind). Overall, the handling of scale and dynamic contrast is deeply impressive throughout Cold Heat, encompassing real extremes. Another vocal work completes the disc, O dessa ögon for soprano and strings; its 4-minute duration, aspirational simplicity and complete emphasis on the words—which are this time allowed to carry their meaning and thereby do practically all the work—result in a song of exquisite loveliness, soprano Hannah Holgersson’s measured delivery surrounded by the sonic equivalent of different coloured lights. Riveting and gorgeous. 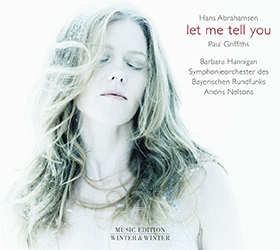 Alongside this, it’s worth mentioning the recent release from Winter & Winter of Hans Abrahamsen‘s let me tell you, a medium-scale (also 33-minute) setting for soprano and orchestra of a text by Paul Griffiths (drawn from his novel of the same name). Knowing that the piece won the Grawemeyer Prize perhaps elevates one’s expectations unrealistically high, but either way, the problems besetting the piece are not dissimilar to those permeating Hillborg’s Sirens. Abrahamsen is apparently seeking a kind of radiant stasis, one in which there are regular hints of passion, intensity, drama and the like, yet which never meaningfully lead to anything more concrete. Put another way, if Sirens is an over-extended money-shot, let me tell you is over-extended foreplay, in which the relentless hinting and teasing and intimating eventually becomes irritating and flaccid, and later attempts from the orchestra to reinforce what little passion makes it to the surface only sounds like overkill. There are, it must be said, some incredible, memorable moments, as one would expect from Abrahamsen, and soprano Barbara Hannigan makes many of them sound very pretty, but they’re nonetheless flashes in the pan, glimpses of something precious in the midst of a white that quickly and repeatedly fades to mere grey.

[…] with the BBC Symphony Orchestra and Chorus, conducted by James Gaffigan. Fifteen months ago, when reviewing its CD release, i found Sirens to be deeply problematic, so it was good to be able to revisit the piece afresh, in […]