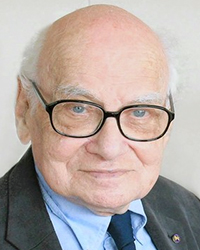 Last week saw the centenary of the birth of American composer Milton Babbitt. Babbitt continues to be a neglected figure, and personally speaking, the anniversary served to remind how little i know of his music and how rarely i’ve encountered it over the years. Those in a similar situation will no doubt be interested in the Babbitt Centenary Concert taking place tomorrow evening at the Leonard Nimoy Thalia at Symphony Space in New York. The concert, which will also be video-streamed live, is being given by the NY-based Cygnus Ensemble, and features two works of Babbitt’s – including Swan Song No. 1, written specifically for Cygnus in 2003 – alongside music by students and colleagues of Babbitt, all world premières. There’ll also be a pre-concert interview with soprano Bethany Beardslee-Winham, for whom Babbitt composed numerous works, including Philomel, Vision and Prayer (also being performed in the concert), Du, and A Solo Requiem.

The complete programme is listed below; more details can be found at the Cygnus website and the live stream (which is free) will be available at livamp.com/cygnus. The concert starts at 7:30pm local time, which means a late night for those outside the US who want to catch it as it happens, but for everyone else it’ll be available to stream afterwards at a more congenial hour.

[…] tough, tenacious surface. i don’t know Milton Babbitt‘s music well (as i admitted when noting his centenary a few years back), and in part that’s precisely due to the fact that i’ve found so much […]