The latest crop of releases from Canadian label Empreintes DIGITALes has proved as thought-provoking as ever, offering extremely diverse approaches to electronic music, with similarly varied results. 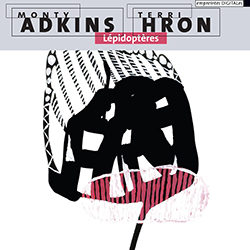 Léptidoptères, a new 40-minute cycle of music by composer Monty Adkins in collaboration with recorder player Terri Hron, takes its inspiration, as the name implies, from families of butterflies and moths. The relationship between the various recorders used and the electronic sounds is deliberately flexible, allowing Hron scope for improvisation both materially and structurally. Selections from a distinct palette of sounds are triggered randomly, creating a ‘habitat’ for Hron, which are subsequently shaped by envelopes that, in Adkins’ words, “focus on specific families or combinations of families of sounds”. The first thing to say is that Léptidoptères is generally at some remove from the ambient aesthetic that’s characterised the majority of Adkins’ work in recent years. That in itself is a welcome and interesting development. In its place is a soundworld more spontaneous and unpredictable, where one’s listening focus is drawn primarily to the shifting, moment-by-moment articulations and textural shadings. The relationship between acoustic and electronic is well-balanced, neither predominating overall, taking turns to assume predominance in the foreground. It’s a work that, to my mind, takes time to establish itself, only really finding a foothold from the third movement, ‘Saturniid’, where the recorder is surrounded on all sounds by dense, broad agglomerations of colour and minute slivers of ticklish sonic stuff. There’s something primordial, elemental about it, carried over into the more overtly meandering environment of ‘Anisoptera’, where everything becomes simultaneously more considered yet very much more demonstrative, passing through some simply delicious episodes that stomp all over the myth that acoustic and electronic sounds can’t convincingly cohere. Hron teases out some fantastical material from her instruments, going some way towards redefining our perception of them. Taken as a whole, Léptidoptères is a nicely strange and engrossing cycle, one that finds a telling compromise between the immediacy of beauty and a more radical exploration into modes of behaviour and interaction. 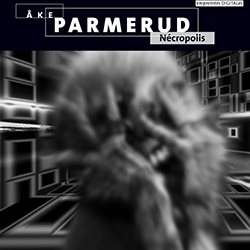 Nécropolis, the latest compilation of works by Swedish composer Åke Parmerud, is altogether more problematic. Last year’s Growl indicated a composer fond of confining himself to discrete aesthetic and sonic limitations, but in the case of these four pieces, it’s surprising and disappointing to hear a recurring vagueness permeating them. In the case of Dreaming in Darkness, an attempt to “create surrealistic fragments of a blind person’s dreams”, it’s not entirely clear whether the overt lack of clarity that’s surely the work’s defining feature means Parmerud has succeeded or failed in his aims. Surrealistic it certainly isn’t, which is a shame as it might have provided something outside the palette of rather hackneyed bells, whooshes and thuds that comprise the primary content of the piece. Indeed, Parmerud’s default approach to demarcating structure via heavily-articulated percussive blunt impacts is subject to a strict law of diminishing returns. The title piece is worse, an arbitrary mashing-up of musics – from Wagner’s Valkyries to Palestrina’s Papae Marcelli mass to Mozart’s Requiem – that’s the epitome of apathetic (mis-)appropriation, with no meaningful sense of direction or purpose. Crystal Counterpoint is a more engaging examination of the sonic potential of wine glasses, fashioned into a pretty loose-weave tapestry passing through nicely differentiated sections, forming a coherent narrative. These are sounds we’ve arguably heard rather too many times in acousmatic music yet nonetheless it’s a piece that certainly makes the most of their limited but very particular timbral qualities. ReVoiced, composed in 2009, is narrowly the best of the bunch. A simple work passing through four different types of regional vocalisation, the first part is sufficiently rudimentary that it gives the impression Parmerud is simply playing with software presets, but the rest are sensitively handled, scrutinising their respective qualities. The second, featuring a Russian woman singing (the only female voice, providing some respite from the work’s overall low register emphasis) is especially lovely, but in no small part this is due to the loveliness of the source recording. It’s hard to recommend such a qualitatively-challenged selection as this, but it’s not without some nice moments. 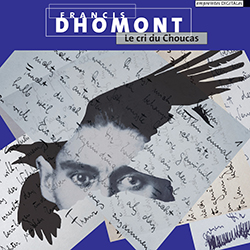 When it comes to acousmatic music as its finest, though, Francis Dhomont remains one of the best of the best. Le cri du Choucas (the Cry of the Jackdaw) is a 70-minute work that forms the third and final part of the composer’s “Cycle of Depths” (following Sous le regard d’un soleil noir and Forêt profonde). As one expects from Dhomont, it’s a bold statement that comes across both as a continuation of and an ongoing reinvention of the acousmatic ‘tradition’ (for want of a better word). Quoting Michel Chion, Dhomont calls the piece an “electroacoustic melodrama”, an extremely appropriate description for a piece founded upon and musically elaborating fragments of text both by and associated with Franz Kafka. The emphasis is psychoanalytic, Kafka’s words being expanded by considerations from Marthe Robert’s As Lonely as Franz Kafka and R. D. Laing’s classic The Divided Self. It takes a little time to get used to its dramatic approach, declamatory spoken passages alternating with and inserted throughout extended musical meditations, but one soon acclimatises to this rhythm, and the results pass quickly from merely fascinating to deeply moving. Dedicated to Dhomont’s father, the text and music confront very complex and painful aspects of Kafka’s own paternal relationship. In response, Dhomont regularly fashions material that’s beautiful but barbed, sometimes arranged in multiple layers of dense activity, sometimes shot through with thin splinters of razor-sharp pitch over roiling depths. Le cri du Choucas is often startlingly vivid (the opening industrial soundscape of third movement ‘La colonie pénitentiaire’ is like being plunged into the prologue of a Terry Gilliam dystopia), but without any sense of calling on easy associations from ‘anecdotal’ sources. Put another way, sounds – as they so frequently do in Dhomont’s work – usually remain just out of recognisable reach, yet retaining enough recollective proximity to trigger both memory and imagination. Coherent and organic throughout, the drama in Le cri du Choucas is just as much to do with the way musical materials are judged and handled than with the work’s more immediately tangible text component. Eighth movement ‘Un message impérial’ is a masterclass in poised tension; despite being situated in the middle- and background, the steady increase in pressure is heart-poundingly riveting. Considering the difficulty of the subject matter, Le cri du Choucas contains music more dark and uncomfortable than one expects from Dhomont, even in the work’s closing moments; far from offering a reassuring conclusion, it passes instead through angular, awkward, even ugly passages, surrounded on all sides by ominous glowering layers of sound seemingly coloured different shades of black. At its end, Le cri du Choucas sounds stunned, which is precisely how i felt too. It’s another spectacular creation from an undisputed master of the art.