i’ve been catching up lately with some of the more recent releases from NEOS, who for a long time have distinguished themselves as not just one of the most forward-looking labels, but easily one of the most fecund, putting out at least one major release every month, often in the form of absurdly impressive box sets. Among this acute embarrassment of riches are a pair of discs featuring music by Helmut Lachenmann, recorded at the 2014 Musiva Viva weekend. Both of them are refreshing, challenging and mesmerising in roughly equal measure, and are highly recommended. 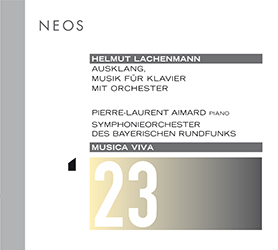 The first is devoted to Lachenmann’s 1985 work Ausklang, the subtitle of which – “music for piano and orchestra” – indicates it to be not exactly adhering to conventional notions of the concerto. It’s nothing of the kind, in fact, exploring instead the idea of sustaining sounds from the piano beyond their natural resonance, or as Lachenmann puts it, a “variety of attempts to prevent the material set in vibration by an impulse … from dying away”. That makes Ausklang sound pretty straightforward, but it really isn’t. The relationship between piano and orchestra is not inherently hierarchical, actions from the former being responded to by the latter. The orchestra (which includes a piano of its own) often can be heard to anticipate, foreshadow or even inspire ideas that then transpire in modified form on the solo instrument. And while there are of course a multitude of instances where pitch, rhythm and other aspects of musical behaviour are resonated, echoed, imitated and otherwise extended by the orchestra, to say that these instances are always obvious, clear or even apparent would be wrong. Indeed, there are several occasions when the music appears to occupy two simultaneous layers, undertaking more of a duet than a back-and-forth. So the emergent complexities of Lachenmann’s rather simply stated intentions are considerable. But structurally, there’s something altogether more simple at play. Just as impulse (violent, sudden) leads to vibration (prolonged, dying), this can be heard in Ausklang‘s episodic character where sections full of fearsome, bullish, muscular gestures are followed by lengthy periods of what has to be called repose. There’s courage in these episodes, as they pull hard against the integrity of the work’s very fabric, yet they contain some of its most completely beguiling passages, attaining the kind of reticent transparency of which Jakob Ullmann would be proud. They constitute an important and necessary contrast with the more dense music surrounding them, the latter of which are often filled with dazzling bursts of virtuosity from the piano. Ausklang begs questions, though, chiefly due to its 48-minute duration. Whether or not it needs or benefits from this duration is highly debatable; over time, while the macro-structure keeps its coherecet, the moment-by-moment material takes on an arbitrariness that becomes a bit wearing. Is it enough to be beguiled by such ephemeral wonders? Either way, the performance, by pianist Pierre-Laurent Aimard with the Bavarian Radio Symphony Orchestra conducted by Jonathan Nott, is hugely involving. 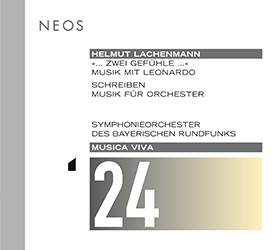 The second disc, featuring the same orchestra, contains Lachenmann’s 1992 work for speaker and ensemble »… Zwei Gefühle …«, Musik mit Leonardo, alongside the revised version of Schreiben, bearing a similar subtitle to before: “music for orchestra”. In this case, that subtitle perhaps underlines the fact that what we’re hearing is actually intended to be heard as music. In calling the piece Schreiben (‘writing’), Lachenmann is alluding to the energies at play in this action, mental, physical, haptic. The result is music that’s as much about the potentiality of sound, the possibility of vibrations coalescing into coherent sounds and pitches as with the by-product of the same sounds and pitches that can be taken as read. There’s a great deal of tantalising vagueness in its 22-minute span, extended shimmerings, tremolandos, rustlings and creakings that as well as beginning the work present a kind of paradigm of its entirety. Noise and pitch are combined and juxtaposed constantly, and the borders of each are rendered moot. Tangibility is transient, and likely of secondary importance, but when it comes – the orchestra swelling into dense agglomerations or unleashing laser-focused sustained pitches – it proves immensely striking. The brass, in particular, take these overt pitches as the basis to develop a large-scale conversation that ultimately becomes climactic. But that’s not (or at least beside) the point of Schreiben, a work that open-mindedly questions how to ‘play’ instruments, and what constitutes material and/or the potential of material. Kudos to conductor Susanna Mälkki for preventing it from collapsing into all-out abstraction. »… Zwei Gefühle …«, Musik mit Leonardo in some respects offers a more immediate argument, rooted as it is in a short portion of narrative from Leonardo da Vinci’s Arundel Codex, offering a vivid account of the discovery of a large cave, resulting in twin emotions: “Fear of the threatening darkness of the cave, but desire to see with my own eyes what wonderful things might be in there.” The spoken role is delivered haltingly, such that the words are broken into fragments. One thereby detects that these emotions are omnipresent through the narrative; the fragmentation can be heard both as a tremulous splintering and/or a lingering extension. The ensemble’s role is largely supportive, their music clearly at one with the emotional thread of the text, expanded in reflective episodes where the voice drops out. Without being in an obvious way figurative or pictorial, they go a long way to keeping the psychological aspects as if not more prominent than the merely descriptive elements, becoming less and less tangible as the text turns away from an opening storm to the prospect of the looming cave. Lachenmann resorts to a wonderful array of metallic swishes in response to the cave’s darkness (suggesting imagined visions), and introduces – via the faintest of rustlings – a palpable sense of tense excitement at the end, hinting at the desire rivalling the fear. This is about as close as Lachenmann gets to being ‘accessible’, and the performance, directed by Peter Eötvös, is given an extra frisson through the composer himself taking the speaking role.