Cheltenham Music Festival got both seriously and playfully pianistic on Sunday. And theatrical too, first in a 50-minute dramaturgical discourse from experimental pianist Sarah Nicolls, and later in a recital by Clare Hammond including two works involving film. Nicolls’ Moments of Weightlessness was a genuine curiosity, insofar as it wasn’t exactly a concert or a piece of performance art, but was instead something beyond either. From one perspective, it was a kind of statement of intent, a demonstration of the aesthetic, the capabilities and the potential of the unique new piano Nicolls’ has developed over the last few years, an instrument that brings to mind the vertical arrangement of the ‘giraffe piano‘, erected on a large steel frame that enables it to be moved and rotated on its axis. 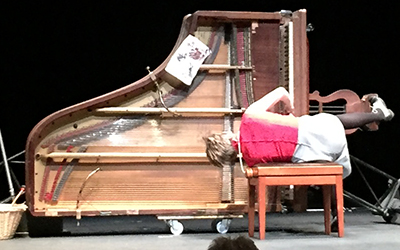 But Moments of Weightlessness was also a portrait of the evolution of the instrument from a much more personal and intimate perspective, one that makes a direct connection with her experiences of childbirth and development. Recordings of Nicolls recounting her thoughts and feelings about these parallel pangs were interspersed with short, simple meditations that invariably involved playing the piano from unusual angles (see left) with a variety of objects placed on and/or within it. Recurring throughout were abrupt shifts between profound and prosaic: the art of performance and the labour/mechanics of setting up the instrument; the focus of musical expression and the continual interruptions of family life; the intricacy and elegance of the piano set beside cheap plastic toys; and the more subtle ostensible polarisation of the piano tradition and Nicolls’ fresh new interpretation and expansion of it, which in reality is not a polarisation at all, unless one’s definitions of what a piano is and what it can do are pretty narrow. Touchingly heartfelt, Moments of Weightlessness was less about what was being played than the situations and contexts out of and, at times, in spite of which music becomes a possibility. The words of her child, heard at the end, rather movingly became those also of her instrumental creation: “I’m your son… I am your son.” 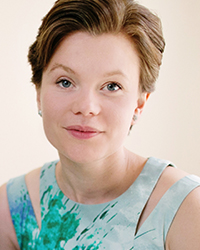 Clare Hammond’s early evening performance was far more conventional but in its own way just as dramatic. Three of the five works she tackled concerned themselves with inspirations from drama, with respect to both literature and film. The exceptions were the three Mazurkas by Thomas Adès and the equally tripartite Piani, Latebre by Piers Hellawell, each of which explored more purely musical ideas. The Mazurkas do what Adès does best—arguably what Adès always does, in multifarious ways—seeking poignancy of expression through convoluted evocations and allusions of earlier styles and idioms. A kind of oblique, never entirely comfortable wistfulness if you will, and in these three short deconstructions of the mazurka Adès passes through lovely veils of impressionism and cerebral, slowly unravelling processes. Hellawell on the other hand built his music upon the juxtaposition of gestures, having a similar trajectory to that of Adès; a melodic sensibility set within bursts of filigree and ornamentation (very beautiful) led to the sensation of making brisk progress through clouds of turbulence, dissipating into a pensive contemplation pitting clarity against density, closing in relative darkness. Hammond’s ability to tease out the details of Hellawell’s complex textures was as riveting as the music itself, her fingers regularly becoming a blur.

There was a pained sense of déjà vu during the performance of Ed Hughes‘ music to accompany Alexander Alexeieff’s 1963 film of Gogol’s The Nose. Here was another response to film that regarded endless generalised minimalistic noodling as appropriate. Not only was Hughes’ music essentially indistinguishable from on-the-spot improvisation, but it lacked–no, it ignored—entirely the drama, the wit, the unsettling trauma and the wry surrealism of Alexeieff’s interpretation (which remains a stunning visual treat). Kenneth Hesketh achieved something infinitely more subtle and telling in Hände, composed to accompany Stella F. Simon and Miklos Blandy’s remarkable 1928 film Hände: Das Leben und die Liebe eines Zärtlichen Geschlechts (Hands: the Life and Loves of the Gentler Sex). Hesketh had also reworked the film to aid his dramatic intentions, which considering his previous work was impressively abstract. Finnissy-like registral extremes and rhythmic uncertainty at the start yield to lengthy tracts of texture–including layers made from chords, and passages of dense counterpoint–with some delightful literal moments, such as string fingertip twangings coinciding with hands almost touching; hands and/or arms being held in place whereupon the piano becomes fixed on repeated notes; and a recurring idea on small bells, the music momentarily transcending the piano at which point the action in the film is halted and its exposure strained, as though subject to an invisible external force. Despite these fascinating devices, Hesketh to a large extent handles the ebb and flow of the drama simply through intensity of dynamic, marshalling his material as though with an organ swell pedal. Without ever making the sense of narrative concrete, it nonetheless felt uncannily moving and considerably longer than its mere 15-minute duration. Hesketh’s earlier work Notte Oscura completed the program, a rather sumptuous melding of harmonic movement within an unstable environment (faintly redolent of George Benjamin’s Piano Sonata), at the heart of which a staunchly lyrical voice is militated against and endlessly modulated by trills and tremolandi. Hammond gave splendid ambiguous shade to the work’s conclusion, rendering the nature of its peace entirely questionable. She’s easily one of the most compelling interpreters of contemporary music, filling her performances with understated fire and crystal-clear virtuosity.