Wednesday evening in Tewkesbury Abbey, in the company of Ex Cathedra conducted by Jeffrey Skidmore, was an encounter with a particular kind of British ubiquity. The music of Hubert Parry, Herbert Howells, Judith Weir and James MacMillan were brought together in an evening focusing on “A New Jerusalem”, four composers whose work, in the church and concert hall respectively, has become (for good or ill) highly pervasive. In the case of Parry and Howells, hearing them beyond the context of liturgical function revealed above all how much their approach to choral writing persists both in the legacy of 20th century church music and beyond as well as the ongoing choral evensong tradition, which for many years has sounded less like a modern expression of faith than a nostalgic clinging to values (both musical and theological) held by an ever-decreasing minority. Hearing them side by side made for an illuminating comparison. What Elgar was to the orchestra, Parry was to the choir, his music never solely about the text or topic at hand but with omnipresent obeisance to a sense of grandiose occasion looming over everything. (Put another way, what Elgar was to pomp, Parry was to circumstance.) That’s neither a problem in and of itself nor is it always unwarranted: Blest Pair of Sirens was composed for a concert marking the golden jubilee of Queen Victoria (an occasion that also witnessed the first London performance of Berlioz’ Te Deum), whereas I Was Glad was written for the coronation of Edward VII, about as big as occasions get. The usual result, and this extends to Lord, let me know mine end (last in the Songs of Farewell cycle, composed late in Parry’s life), is a level of portentousness that constantly threatens to tip the music over into melodrama. It’s not just due to the sense of occasion, but also to Parry’s possibly S. S. Wesley-inspired habit of seeking to wring out every morsel of meaning from each and every word, arriving at a rather laboured, at times halting manner of delivery. Contrast this with Howells, whose O pray for the peace of Jerusalem demonstrates his uncanny ability to attain an almost absurd level of emotional and spiritual transparency in his settings (the concluding cadence of Howells’ Like as the hart remains one of the most sublime, genuinely numinous moments in the whole history of church music). Here, instead, was directness, no sense of occasion whatsoever, a composer deeply concerned with the veracity and clarity of both words and music. Regardless, though, Parry’s harmonic sensibility remains persuasive with occasionally clever and unpredictable pivoting shifts of direction; what he lacks in immediacy and beauty, he makes up for in imagination—and sheer volume, of course (at which Ex Cathedra excelled, producing a seemingly infeasible fortissimo). Personally, i’ll take Howell’s exquisite intimacy of expression every time; size isn’t everything. 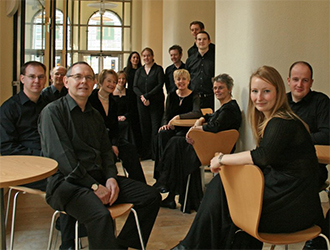 But i wasn’t primarily there for Parry or Howells; the concert also featured Judith Weir’s Illuminare Jerusalem and James MacMillan’s Seven Angels, premièred by Ex Cathedra in January last year. i’ve written about the Weir before, several times, and Ex Cathedra’s rendition of it was splendid, with organist Alex Mason bringing out the pedal phrases just enough to make them a blink-and-you-miss-it flash of something deep and uncanny. As for the the latter work, a 35-minute setting of a hefty chunk of the book of Revelation for choir (utilising some as soloists) and a small ensemble comprising two trumpets (also wielding shofars), harp, cello and a light battery of percussion, i have to liken the experience of Seven Angels to that of Noye’s Fludde. i’m sure this is not what the composer intended, but the piece often came across as though it had been written explicitly with children in mind. The angels blow their trumpets: cue the shofars! Flashes of lightning and peals of thunder: cue the bass drum and tam-tam! The entire span of the work comprises precisely this sort of rudimentary word-painting by numbers. There are some nice moments, particularly the sequence of soloists emerging from the choir to unleash declamatory portions of the text. These proved very much more effective than the full-scale choral approach taken with the majority of the narrative, robbing it of the muscularity and the frankly abject intimidation endemic in the author’s awestruck words. i spoke of ubiquity at the start, but one can’t help wondering whether MacMillan’s legacy will one day crystallise as the oeuvre of a composer who meant well, but whose powers and imagination were limited.

Is it, though, a far bigger problem that the piece (and, i suppose, the entire concert, thematically speaking) was essentially a triumphal paean to the coming of New Jerusalem, a ne plus ultra act of God ushering in a Utopian millennial new age following the wholesale massacre of non-believers? No amount of lusty communal singing of Parry’s Jerusalem could prevent that deeply troubling question from persisting long after the reverberating notes had subsided.