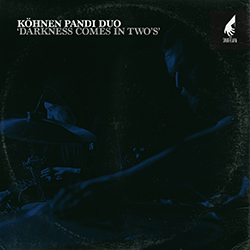 There’s a time to get excited about music, and there’s a time to leap around with irresistible, exuberant elation. 2017 is less than two weeks old, and already I have no doubt whatsoever that I’ve heard what will prove to be one of its very best albums. Looking back over the last decade, one of its most epic recurring zeniths—running through it like a range of mountains towering over almost everything else—has been the output from two sibling projects of Dutch musician Jason Köhnen: The Kilimanjaro Darkjazz Ensemble and The Mount Fuji Doomjazz Corporation. They’ve appeared on 5:4 on numerous occasions—TMFDC’s Anthropomorphic was my best album of 2011, Roadburn was almost my best of 2013, and both groups have been featured on several of my mixtapes—and what draws me in so inexorably every time is its astoundingly complex amalgam of breathless improvisational play with doom-laden but paean-like (post-)apocalyptic melancholy. That’s slightly more true of TMFDC than TKDE (the former being the live improvisation version of the latter’s more rigorous compositional approach), and it’s equally the case with Köhnen’s latest project, Köhnen Pandí Duo, a collaboration with Hungarian drummer Balazs Pandí, best known in the last five or six years for his work with Merzbow. The duo’s first album, Darkness Comes in Two’s (sic), was digitally released a couple of days ago, and it’s not just something special, it’s incredible.

Conducting itself with the gravity of a symphony, its 45-minute duration is divided into three roughly equal movements, each in their own way an attempt to grapple with the implications of their ideas within an infinite, yet all-enveloping, claustrophobic soundworld. The first is a slow burning build that could be called drone-like if it wasn’t so relentless, every passing moment ratcheting up the tension and heaping more fuel onto what quickly becomes a glow(er)ing fire. Four minutes in—spoiler alert—loud, synthetic bursts of analogue squelch completely transform the perspective: everything hitherto is revealed now to be merely middlegrounded, a shift that’s decidedly intimidating. But for the first of several times on the album the duo bravely lets an ostensibly significant moment pass and even almost peter out, only then to turn things around rapidly, here triggering a series of almighty surges full of shit and shine, their excoriating textures as ravagingly ruinous as they are ravishingly beautiful. What sets the first movement apart from the other two is in the way Köhnen and Pandí allow the elements to jostle and jolt each other in a metrically amorphous way, sounding like the contents of a magician’s cauldron: a glimpse of some bass here, the possibility of a string idea there, clattersome percussion moving without an obvious pattern or plan: all elements that may or may not prove important in the ongoing alchemy taking place.

The latter movements opt for a fascinating exploration of stability, both employing harmonic oscillations and pulses to underpin and just about hold together the chaotic forces churning above. In the second movement the duo steers the timbral world away from pitch to drum-punctuated noise bursts akin to some form of supersize alien breathing. It’s out of this that the oscillation emerges: a slow, graceful IV-I cycling progression that becomes the see-saw fundamental for an immense, playful sequence in which drums and electronics manifest that alien presence, going on a positive rampage. It’s disorienting when the oscillation abruptly vanishes, leaving a roiling mess of aspirate clamour, though still sufficiently muscular that it seems almost to form substance in its own right. Köhnen extrudes pitches into it and Pandí overlays beats, bringing about—after twenty-five minutes, and admittedly coated in grit—the first instance of real sonic certainty. The final movement takes an alternate approach towards similar but ultimately more overwhelming ends. Settling at the outset into a brooding paranoid loop, this time Pandí opts for a splashy pulse with the pace of a cortege; there’s clarity here but vagueness too, the duo’s material busy but prevaricating. Pitch gradually asserts itself again, leading to a new, altogether more triumphant V-I oscillation, forming a cadential illusion that continues through a torrential onslaught of the most effulgent, effluvial glory, so powerful that it essentially blows itself out, the final few minutes becoming strange and oblique, vaporous but razor sharp to the last.

This is but a pale attempt to capture something of the agonised ecstasy Köhnen and Pandí express in this outstanding live performance, which took place in Budapest last November as part of the Jazzaj concert series. Köhnen’s unique dark-/doom-laden rendering of jazz has been away too long (it’s been five and four years respectively since the last TKDE and TMFDC releases), but on the strength of this amazing new album, a wait has never been worth more.

Darkness Comes in Two’s is officially released on 1 February, but is available to stream and buy via Bandcamp (and below); digital only at this stage, no news yet on whether a physical release will be forthcoming. Beyond this, much of TKDE’s and TMFDC’s output has been out of print for a while, but there’s a program of reissues currently happening: Denovali and Svartlava are the places to go. And while you’re at it, check out Köhnen’s other recent darkjazz project, The Thing with Five Eyes.