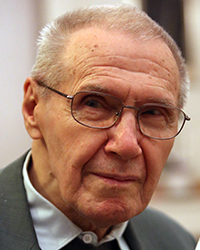 For about as long as many people can remember, Romanian composer György Kurtág has been working on his first opera, based on Samuel Beckett’s Endgame. It’s been announced, postponed, re-announced and re-postponed to the point where one begins to wonder if it will ever become a reality, but if all goes well, the opera will finally be unveiled in Salzburg next year.

In the meantime, Kurtág has made available a typically minuscule sliver of music either directly taken or derived from the opera, in the form of a three-minute work for string quartet, titled Clov’s last monologue (a fragment). It’s cast in a simple ternary form structure (A1-B-A2), quickly establishing – after a fortissimo opening blast – an achingly fragile but lyrical primary idea. A wafer-thin melody that falls more than it rises, Kurtág barely nourishes it with bleached harmonies and almost casually disinterested pizzicati, in the process providing just the barest hint of development. This is contrasted with a middle episode that places the cello in the foreground, focusing more demonstratively on melody, the upper strings concerning themselves with more fast-moving material. The quartet unites briefly before splitting into what sound like two duos, the violins responding to the viola and cello, with echoes of the main idea, before finally uniting again. Kurtág then returns to the opening, simply stating its main idea again before evaporating it in a pizzicato rendering that closes with one of new music’s most utterly enfeebled harmonic whimpers.

More than many composers, Kurtág is able to encapsulate real narrative cogency and a potent emotional range within very small time-frames (he’s surely the Webern of our day), and the fragment that is Clov’s last monologue doesn’t only do this, it also says big things about what’s in store once Endgame finally makes it onto the stage. This world première performance was given by the Arditti Quartet at the 2014 Wittener Tage für neue Kammermusik, at a concert celebrating the quartet’s fortieth anniversary.

Thanks for this. I’ve recently got into Kurtag’s music in a big way. I had no idea that he was writing an opera based on Endgame, so I’ll definitely be checking it out (if it ever happens). The only other Beckett related opera I’m aware of is Morton Feldman’s Neither. It’s a great work, although I think you can tell that both Feldman and Beckett hated opera. It lasts just under an hour, making it probably one of Feldman’s shorter works!