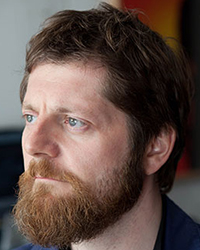 The next miniature work in my Lent Series is something a little different from the norm. Dave Price uses an array of game calls and bird whistles in conjunction with a piccolo to create his taut, playful and at times downright hilarious three-minute Twitcher.

Those of a prog rock disposition may find Pink Floyd’s Several Species of Small Furry Animals coming to mind during the work’s long opening section, cycling rhythmic ideas hocketed left and right with all manner of unexpected punctuations, embellishments and hiatuses. After about 80 seconds, everything gets significantly cranked up: the metre becomes shorter and seemingly quicker and there’s less overall sense of rhythmic control, finally leading to a prolonged eruption of wild wails, squeals and ratchet bursts. Price lets out all the pent-up tension with a violent bang, whereupon the piece discovers an altogether new kind of order, the piccolo articulating a Latin-like melody, the music no longer twitching but swaying and dancing to a close.

This (possibly first) performance of Twitcher was given by three members of Price’s own ensemble, Noszferatu – Ivo de Greef, Damien Harron and Finn Peters – at the 2013 London Jazz Festival.